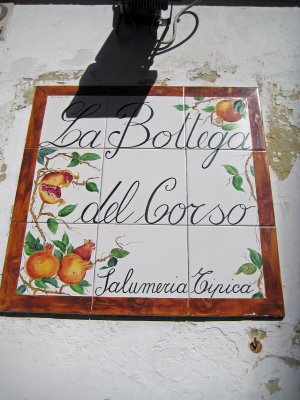 We began our first day in Lecce with an espresso macchiato (or cappuccino for some) at Bar Martinica right across from our B&B. Silvestro had cautioned us against eating breakfast since the Italians tend to only have a quick coffee or pastry in the morning, preferring instead to eat a larger (and longer) lunch and dinner. 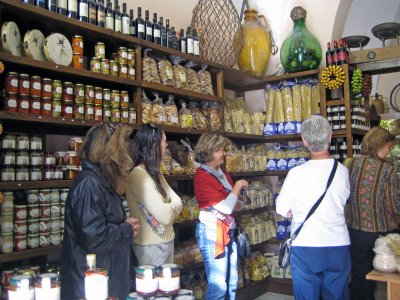 After coffee we wandered down the main street to check out the wares at La Bottega del Corso – primarily for Silvestro to enlighten us about factory made pasta and to compare and contrast that with what we would be making in class during the week. 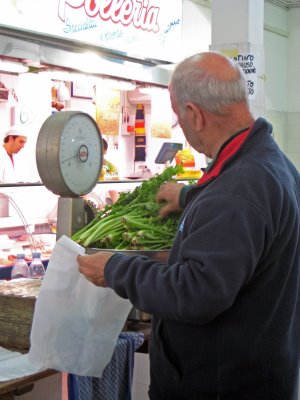 After a short visit to the shop, we continued to the main market in town to begin shopping for ingredients for the day. Although Silvestro had taught us how to order in kilos and in Italian, it would be a few more days before everyone in the group was comfortable enough to shout the orders out. 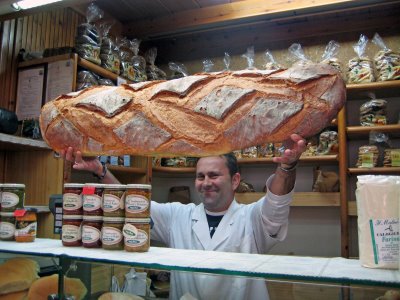 Lucca had prepared an enormous loaf of rustic bread for us that would last most of the week. Isn’t he adorable?! We noticed immediately that if you didn’t get to the market early, the fresh bread would be gone. 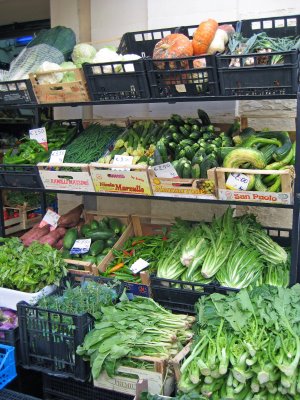 One more stop outside at the produce stand for greens and we would be on our way, anxious to start cooking after two days touring in Rome and a full day of travel to Lecce. 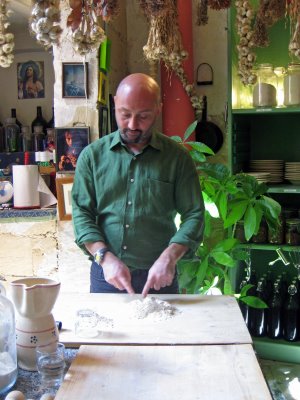 We began making pasta as soon as we arrived at the school. Silvestro explained that three things affect the taste and cost of pasta: the age of the grain, the time to dry, and how it’s extruded. We combined three parts semolina flour and one part farina d’orzo (barley flour – something unique to the pasta of this region) and only water, no eggs. We learned that it’s easier to add more flour if the pasta is too sticky than to add more water if it’s too dry, and began kneading our dough until it was smooth. 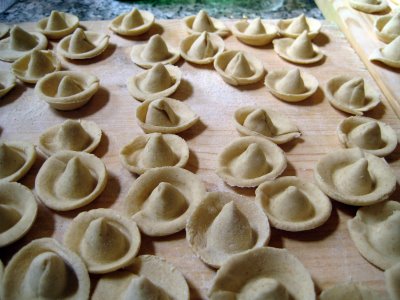 For our first pasta type we made cappolleti messicani, or Mexican hats. Dough is rolled the thickness of a stick of gum, cut into circles with a glass, the each circle is cut in half, shaped into a cone, then inserted into a wine bottle to press into the hat shape. 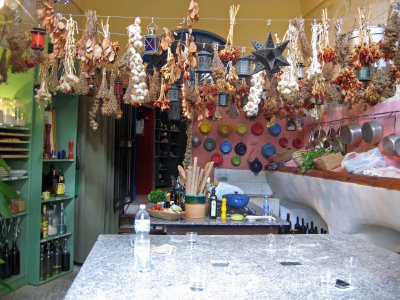 I formed some immediate observations about class during the first day. The kitchen in a renovated barn was lovely, using functional items like cutting boards, colanders, and towels for decoration. And I could tell by what we would be making that simplicity rules in cooking in this region of Italy. 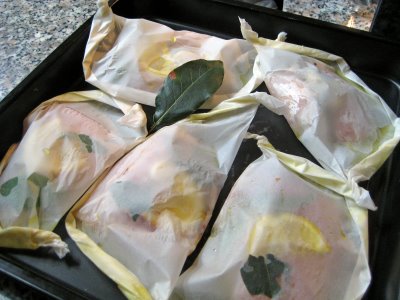 I obviously cook a lot, so for me the learnings would be in the subtle details: using arugula as a cooked green, Verdeca versus Verdicchio wine, hand made pasta techniques, the saltiness of the mussels from the Ionian Sea, and how a hotter oven yields bread with a harder crust and chewy crumb. Silvestro was in his element – in charge, educating the group – and Giuseppe was adorable. 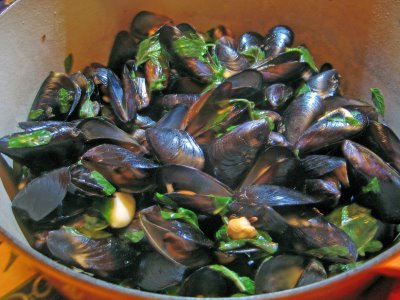 For lunch we prepared mussels; pasta with fresh tomatoes, arugula and hard ricotta; a local fish similar to red snapper baked in parchment paper with herbs and lemon; and melon soaked in Marsala wine. 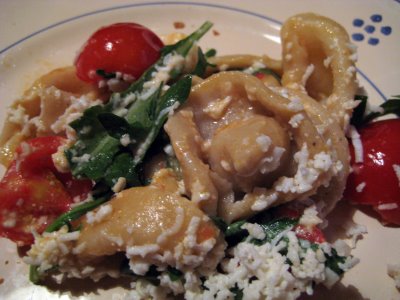 The group loosened up as lunch went on, perhaps because the wine started flowing, and we could tell we were in for a great week. 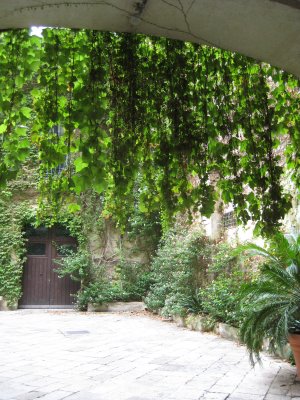 Our accommodations for the week were in the lovely Pallazo Rollo B&B – that’s my apartment on the left below, the door tucked in among the incredible ivy. 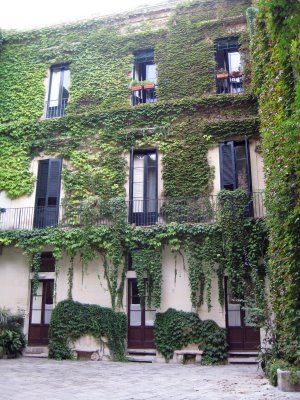 Before dinner (and after a nap for most) we headed to a local shop for an olive oil lesson and tasting, where we learned that extra virgin olive oil is always the first press, and must be less than .8% acidity and defect free. Virgin, which we almost never see in the US, is greater than .8% acidity, but is still from the first press. The oil you see labeled “olive oil” is usually heat or chemically extracted after the first press and should be avoided at all costs! To achieve a high quality oil, the growers must focus on the pruning and spacing of the trees and harvest by hand when the fruit is slightly unripe. Classic aromas in high quality extra virgin olive oil are grass, artichokes, and green tomatoes. 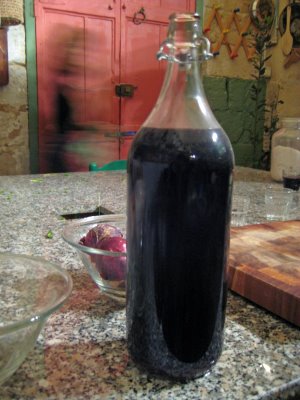 Back at the school we prepared to make a simple vegetarian dinner, paired with the house Primitivo wine that Silvestro introduced us to. (That’s Carolyn in motion in the background.) We sauteed eggplant in a dry pan until the water evaporated then seasoned them with extra virgin olive oil and mint, roasted small peppers, sliced raw fennel, boiled chicory and rape, and caramelized green onions. 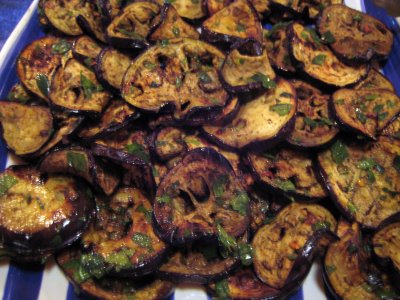 All of the veggies were served with a fava bean puree and we finished the meal off with semifreddo uva, green grapes that were partially frozen then dusted with vanilla sugar – simplice e delizioso! 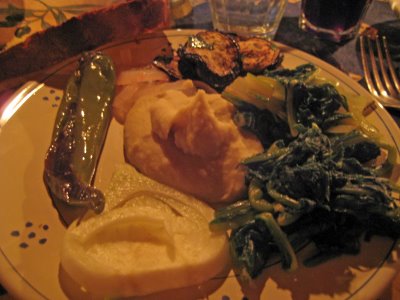 Throughout the meal we ate molto glasses of the house Primitivo which had been aged in cement tanks, leaving it with a fresh fruity taste, not overly tannic or heavy. Back to the B&B very late, very satiated, and very tired.