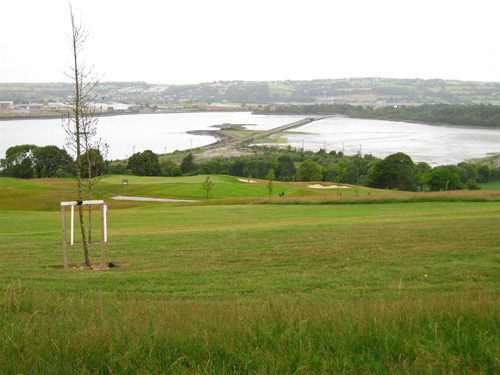 The southeastern coast of Ireland is less of a solid coast, and more of a jagged coastline, filled with lots of inlets and a bunch of islands, including Great Island where Cobh (prounounced “Cove”) was settled. You cross several little bridges and causeways to get here, passing by marshy looking golf courses like this on the way. 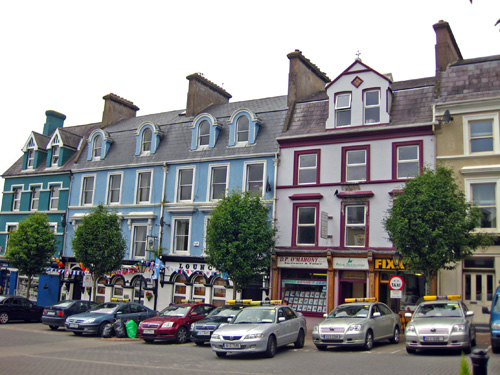 While this town is tiny, clinging tightly to the side of a hill, it’s steeped in history. Two and a half million of the 6 million Irish who emigrated to North America did so from this port during the famine. 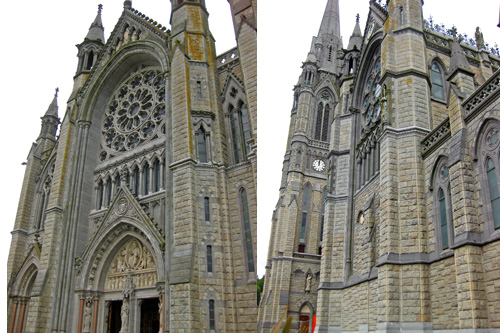 Rising high above the town is the Cathedral of Saint Colman, which has been called “the most ambitious project of the church in the 19th century in Ireland” as well as “the most costly Irish ecclesiastical building of the Victorian era”. It’s flat out enormous. 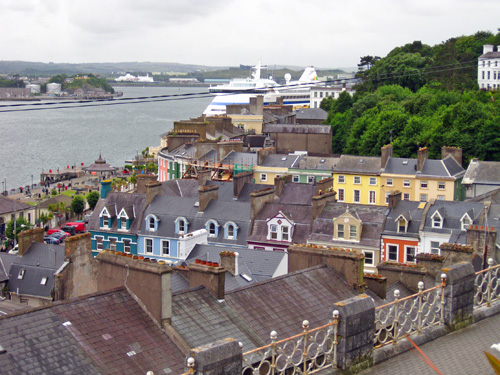 The Irish woman from town directing us said “there are a few steps”, but there are actually about 100 steps and it rises dramatically about 200 feet high. So after determining that it would be impossible to get my mom with her walker up to the church, I decided to scurry up there quickly alone in order to snap a photo of the view while my dad waited with my mom at the bottom of the steps. You’ll see a cruise ship in the background – they regularly come to Cobh, along with freighters, because this harbor is considered the 2nd largest natural harbor (with great depth) in the world. 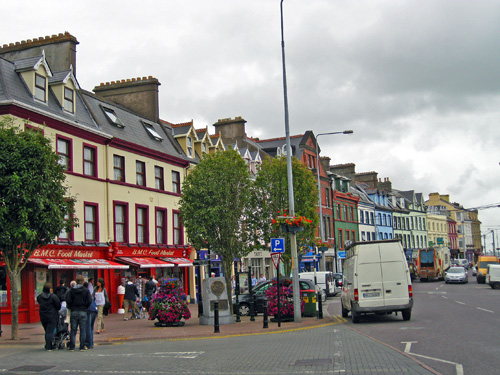 Throughout the town the buildings are brightly painted, I think something one is inspired to do when you live in a rainy climate as it brightens things up quite a bit. 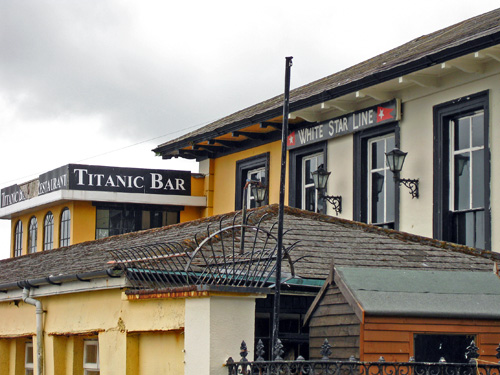 Cobh also has the distinction of being the port from which the Titanic sailed on her transatlantic voyage before tragically sinking at sea, over 2000 passengers perishing. 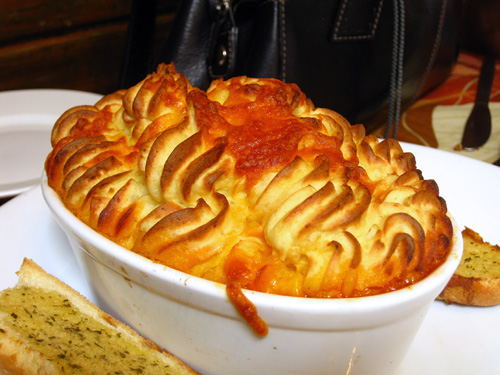 We tucked into a small restaurant near the water as the rain started coming down again, and my dad ordered the traditional shepherd’s pie for lunch which was large enough to serve a family and piping hot. We should have shared it, but instead I opted for a chicken curry dish. While it was unremarkable and not really photogenic, my friend Susan would have loved it because it came with both rice and potatoes (she loves a double starch). I think I’ve had potatoes at every meal since we’ve arrived – kind of like eating pasta in Italy, I guess. 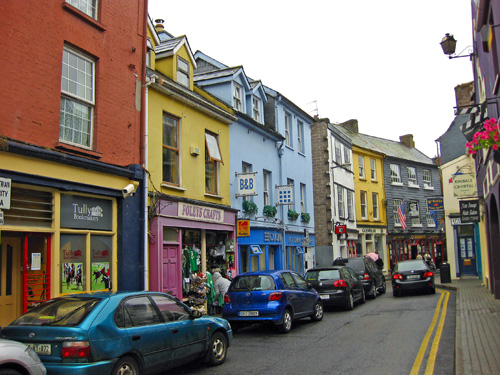 Back in Kinsale, rain coming down, I wandered the town a bit just to check out the shops before we leave County Cork tomorrow. 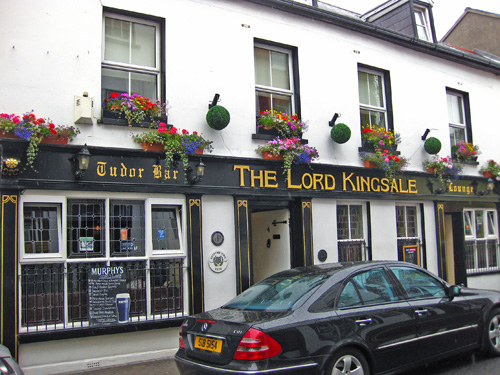 I just love the little pubs like this that are overflowing with potted flowers that, thanks to the rain most every day, are so vibrantly colored. 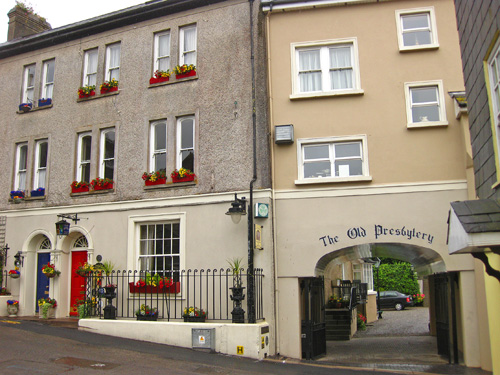 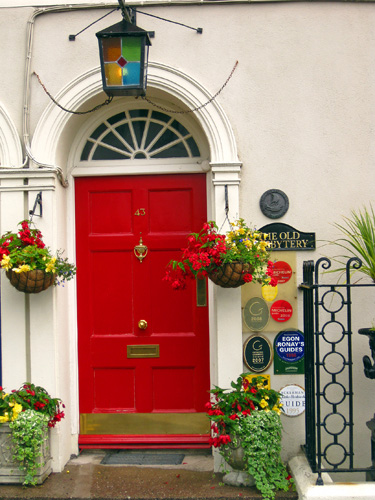 After a short visit to the International Museum of Wine at Desmond Castle (Prison), I tucked back into our B&B for a rest before dinner where the gracious Noreen was quick to make sure I knew my mom was resting upstairs still and that my dad, having gotten lost trying to buy a paper, had managed to find his way home again and was also resting. It’s mentally challenging, and therefore a bit tiring, to keep track of both parents, making sure they are accounted for, happy, rested, fed. I can’t tell you how much I appreciate the folks here helping me out! 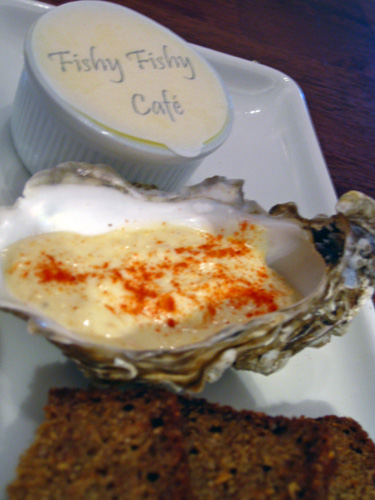 Not even the downpour at 6:45 pm could cause me to miss our dinner at Fishy Fishy tonight. I’ve been reading about this place and saw it on PBS (Rick Steeves) and it took us a wee bit o’ trouble to get a reservation. I simply love the way they served this hummus in an oyster shell (pardon the lack of focus – long day!). 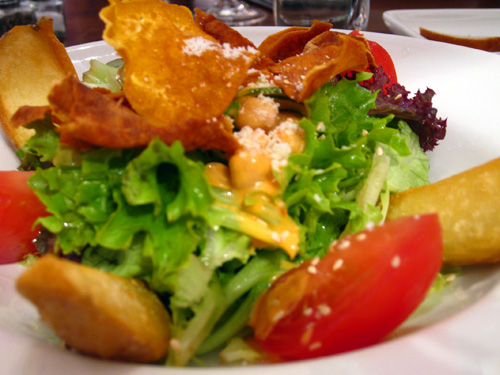 And really, only in Ireland would you get a salad that includes not one, but two types of potatoes – sweet potato chips and white potato fries – as part of the salad. My dad pointed out at dinner the fact that I’ve had fries at every meal, while I was fixated on the fact that I now eat Irish soda bread with the great Irish butter with every meal. Perhaps I’ll need to try my daughter’s cleansing soup fast upon my return. 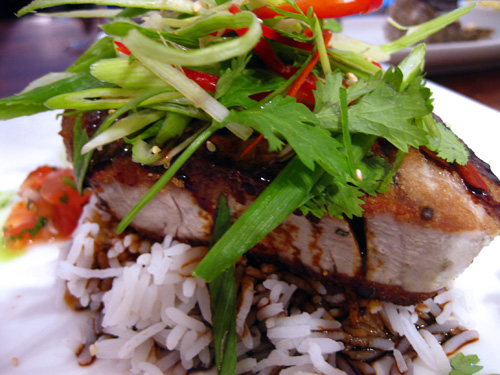 Can I rationalize my love of the potatoes and bread by pointing out that I am eating fish at nearly every meal? Tonight it was a great yellow tail tuna cooked medium rare and served over basmati rice with soy glaze, wasabi cream, ginger and slivered green onions. Man, I was so wrong about the food in Ireland!

Side note on the rain – it was a downpour, and I suggested to an Irish woman I passed near the restaurant that perhaps it would rain itself out and be nice tomorrow, she replied, “Well, they say we need the rain!” Are you kidding me?! It seems like it must have rained for the past 6 months to be this lush!