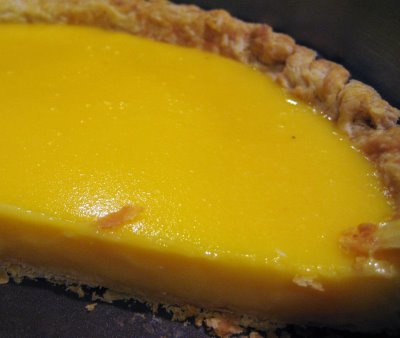 I’ll admit – I’m really not much of a baker, but when I went to pastry class I found tarts to be easy and foolproof and versatile. This lemon lavender version is the first type I learned, and I’ve loved it ever since. Serve this at your holiday dinner for a little bit of France at your table.

Heat oven to 350Â°. Dock crust then line crust with foil and pie weights and bake for 20 minutes. Remove foil and pie weights and continue baking until crust is cooked and is a light golden brown, about 15 minutes more. Remove from oven and let cool. Zest 4 of the lemons into a large metal bowl or double boiler. Juice the 4 lemons and continue juicing remaining lemons until you have 1-Â½ cups of lemon juice. Add the lemon juice, sugar, whole eggs, egg yolks, and lavender to the zest, and heat the mixture over simmering water, stirring until mixture is thickened. Strain lemon curd through a strainer into a bowl; discard solids in strainer. Whisk in butter one tablespoon at a time, and then pour into the prepared tart crust. Refrigerate tart until well chilled and set, about 4 hours.

Blend flour and butter in an electric mixing bowl on medium low until roughly combined; small lumps of butter should still be visible. Combine water and vinegar. With the mixer on medium low, add liquid slowly just until the dough comes together. When it begins to form a ball, stop adding liquid even if you have some left. Remove dough, pat into a ball and cut in half. Flatten each half in plastic wrap into a thick disk, about 5 inches wide. Wrap well and refrigerate for 1 hour or up to 24 hours.