I’m always looking for a new fish to try so when the Whole Foods seafood guy recommended this Hawaiian Ono I jumped at the chance. He said it was quite like tuna and could grill easily, but subsequent research tells me other wise. 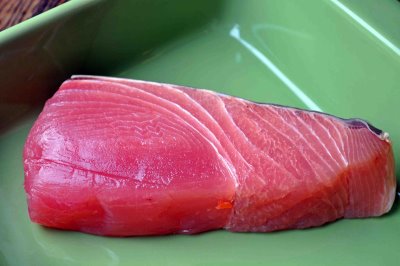 Ono is drier than tuna and when cooked has texture a bit like swordfish. My choice of a wet marinade and then pan searing it seemed to provide good results. I did a simple marinade of soy sauce and then added some grated ginger. I keep extra knobs of it in the freezer and use a Microplane zester or grater to shave it over the top – works great! 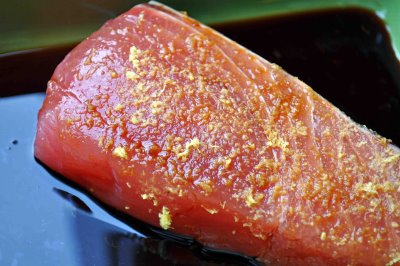 I also grated some garlic over this fish, but forgot to photograph that. Next I turned the fish in the marinade so that both sides were coated in soy, ginger and garlic and let it sit in the refrigerator for about 30 minutes. (Remember, fish doesn’t need long to marinate!) 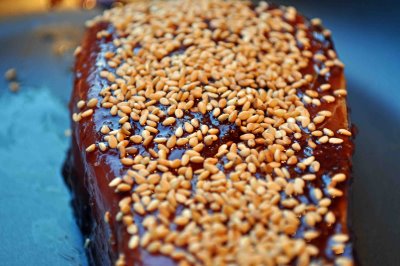 Finally, I sprinkled it liberally with sesame seeds and then put it seed side down in a non stick skillet and coated the other side with sesame seeds. Partly through the cooking I realized that I should have used a little oil even though the pan was nonstick. So if you do this dish at home, use some canola oil. 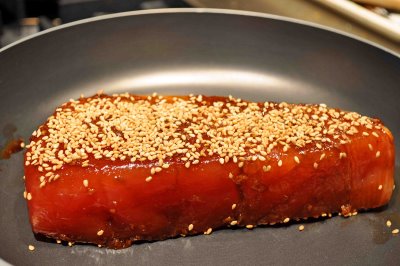 I seared the fish on each side and then let it continue to cook, covered (I think this helped keep it moist) for about 3 minutes per side. You want to keep this fish medium to medium rare, as you see in this photo. 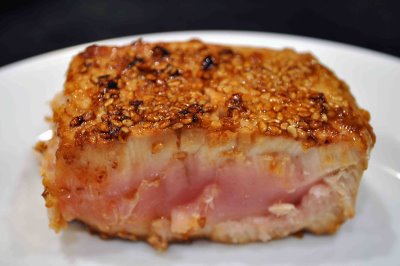 I served this with some simple jasmine rice and an arugula salad (which doesn’t go at all with Asian food but I couldn’t resist because the arugula in my garden is so beautiful and delicious!).