When I was selected this month for the Foodie Fights Battle 10, I knew that I had been handed a match made in heaven! Foodie Fights serves up 2 ingredients – often not at all something you would think to put together – and pits 4-6 food bloggers against each other to create something unique and then blog about it. 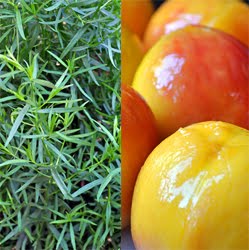 This battle was tarragon and peaches, and I knew I wouldn’t have to look far for my ingredients. 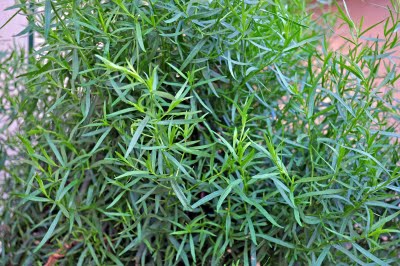 I’ve been raving about my gardens this year and it just so happens I have more fresh tarragon than I could ever possibly imagine using (call me if you want to come over and harvest some!). I love it in omelets and Bearnaise sauce, but have wanted to branch out with some new tarragon recipes. 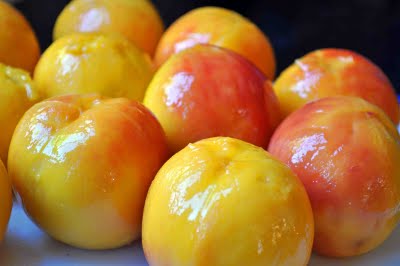 And, timing being everything, those fabulous tasting Colorado peaches from our western slope just hit the markets this past week. I started by scoring the peaches on the bottom and dropping them into boiling water, then an ice bath, in order to get the skins to slip off easily. I just love the colors in this photo and salivate just looking at them. Next I sliced them in half, removed the pits, and then proceeded to make a fruit tart modeled after my classic apple tart that uses Frangipane, a creamy mixture of almond flour, eggs and sugar. 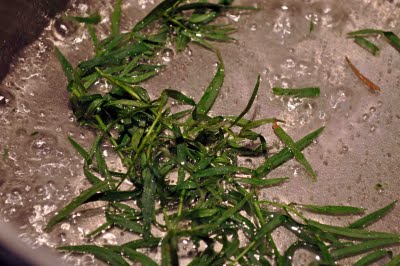 I wanted to have tarragon flavor in the tart as well as the ice cream I was envisioning serving with it, so when making a simple syrup to coat the peaches in, I made sure to infuse it with a healthy handful of fresh tarragon sprigs (strain them out before proceeding). 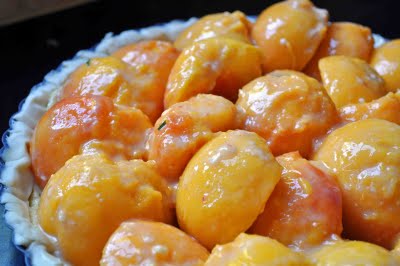 After rolling out the dough and spreading the bottom of the tart crust with the frangipane, I layered the peach halves around. Now had I been really on the food blogging ball, I would have photographed the beautiful finished tart. Instead, I was up to my eyeballs entertaining a group of eight for dinner, and by the time I pulled the tart out to serve, it was gobbled up before I could click off any shots. You’ll just have to trust me – it was gorgeous and delicious! 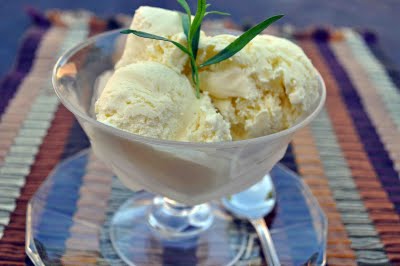 But the piÃ¨ce de rÃ©sistance, however, of this dessert, if I do say so myself was the creation of the rich and creamy (custard based) tarragon ice cream that I served on top of the warm tart. I managed to snap off this shot of just the ice cream the next day. It was one of those wonderful flavor pairings that left my guests saying, “What is that unusual flavor?” right before asking, “Can I please have some more?!” You gotta try this!

Preheat oven to 350Â°. Roll crust out into a large circle and press into an 11″ tart pan, trimming the edges. Set aside to rest, covered lightly. Heat sugar, tarragon, and water in a small saucepan until the sugar is dissolved. Let cool slightly, strain out tarragon and discard, then toss with peaches and flour. Gently spread frangipane across bottom of tart crust. Starting at the outside edge, place peach halves around, overlapping slightly, and continuing working in a circle until you fill the tart to the center. Bake until crust is browned, the peaches are softened, and the frangipane is bubbling up through the fruit, about 1 hour. Let cool slightly before cutting.

Blend flour, salt and butter in an electric mixing bowl on medium low until roughly combined; small lumps of butter should still be visible. Combine water and vinegar. With the mixer on medium low, add liquid slowly just until the dough comes together. When it begins to form a ball, stop adding liquid even if you have some left. Remove dough, pat into a ball and cut in half. Flatten each half in plastic wrap into a thick disk, about 5 inches wide. Wrap well and refrigerate for 1 hour or up to 24 hours. To prepare crust, remove dough and let sit for 30 minutes at room temperature before rolling on a light floured surface into a 1/8 inch thick crust. Transfer to the tart pan and gently press the crust into the edges of the pan, trimming away any excess crust. Wrap crust (in tart pan) in plastic wrap and refrigerate for 1 hour or up to 24 hours.

Cream butter and sugar together until well mixed. Add almond flour and mix until smooth. Add beaten eggs one at a time, then stir in the flour and rum flavoring. Use immediately or wrap well in plastic wrap and freeze.

Whisk together the milk, sugar, egg yolks, and tarragon in a double boiler. Add vanilla bean and cook over simmering water until the mixture thickens, about 10 minutes, stirring frequently. Remove from heat and add heavy cream. Refrigerate overnight to allow tarragon to infuse its flavor. Strain and freeze in an ice cream machine according to manufacturer’s directions and then freeze until firm in the freezer.