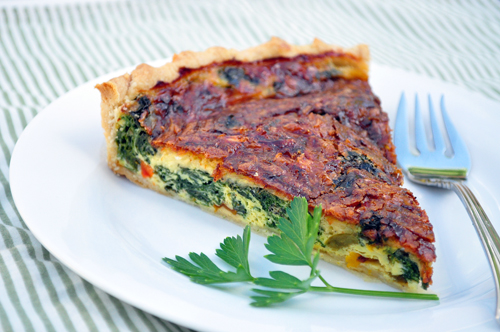 I consider myself a savvy home gardener. I put my tomatoes in early with walls of water to get a jump start on the growing season (hence I’m already harvesting tomatoes here in Colorado). I only plant veggies that I don’t get enough of from my CSA farm share or that I know I can can or freeze. And I try to plant in rotations – small amounts that can be harvested and replanted for a second harvest the same season. 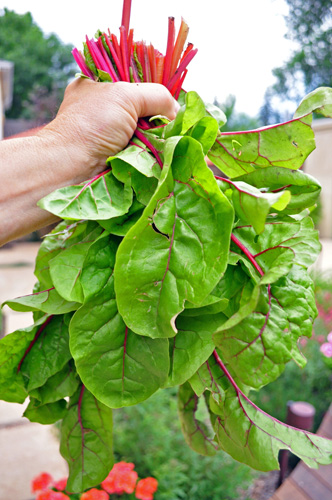 But despite all of that planning, I still get some of those overwhelmingly large harvests that come all at once and leave me scrambling to find how to use the produce and not waste it. Last month it was arugula – this week it’s Swiss chard.It seems that overnight the entire row of greens was ready to go to seed. I cut it instead of digging it up (leaving the roots intact in the hopes that it will re-sprout for me) – if you don’t think this looks like alot of Swiss chard, let me point out that it’s filling a 30 inch long DEEP farmhouse style sink to the brim! 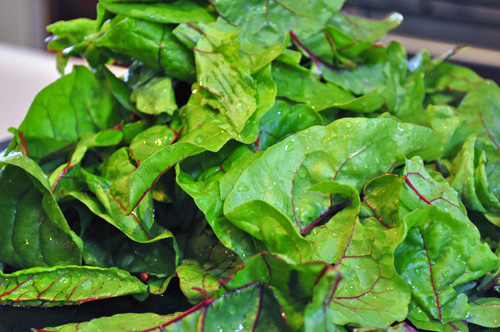 I always soak my greens in ice water in a big sink for several hours. Most of the dirt falls to the bottom and the icy water helps crisp up any leaves that have wilted from the sun. (This also works well if you get lettuce from your CSA and it arrives completely wilted – just leave it in the sink overnight and you’ll be thrilled with the result.) Then I strip the leaves from the stems… 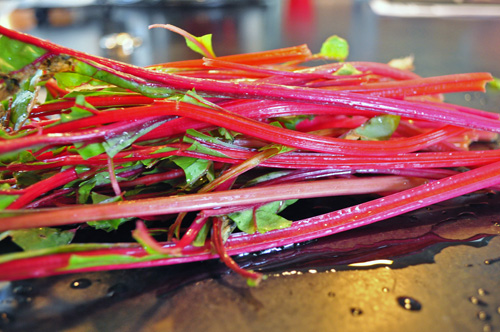 …and toss out the tough stems. (Do this with any tough stem green like kale, mustard greens, chard.) 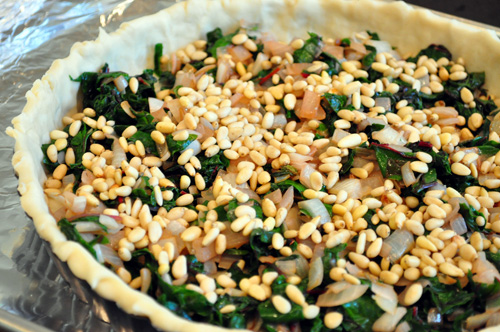 I decided the only way to work through these greens in a day or two would be to cook them down. I leave for Ireland on Monday – more on that tomorrow! – and there’s no way I could imagine my husband tackling the garden and determining what to make with Swiss chard. So I sauteed about half of them (you could just take the wilted greens at that point and freeze them then use like you would a box of frozen spinach) with some onions and layered that along with some pine nuts and grated cheddar cheese to make a tart (quiche) for lunch for my friends yesterday. 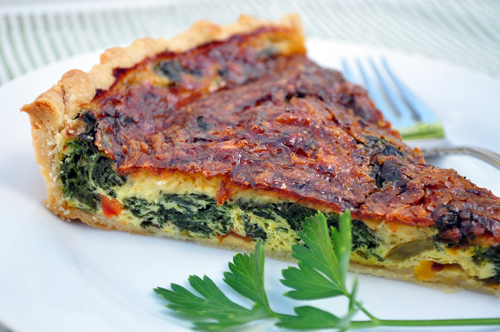 I am kind of a serial eater. Serial, not cereal, although I like that too! I mean that once I get on something I can eat it over and over for a few days until I tire of it. So as I began my workout this morning I had that flash of inspiration. I turned off the eliptical trainer, ran upstairs and made a second tart with the rest of the Swiss chard in the sink, knowing it would be ready for breakfast when I finished my sweating. I had some leftover sauteed tri-color peppers in the fridge so I layered peppers, sauteed Swiss chard, grated Gruyere cheese in this version. Hit the spot!

Press crust into tart pan and set on a baking sheet lined with foil. Heat oil in a large stockpot over medium high heat and add Swiss chard. Cook over medium high to high heat until chard wilts down, turning frequently with tongs. Remove from heat, pour into a strainer, and carefully press out any excess liquid. Turn chard onto a cutting board and roughly chop. Spread peppers or onions on the bottom of the tart, top with chard, then layer with grated cheese. Beat eggs together with milk and salt and pepper, then pour over the tart. Bake at 375 degrees until cooked through in the center, about an hour. Let cool for a few minutes before removing tart from the removable ring to slice and serve. Tart may be served warm or at room temperature.