Just as the barely pink tomatoes on my counter continue to ripen, so does my quest to use up my green tomatoes also continue! 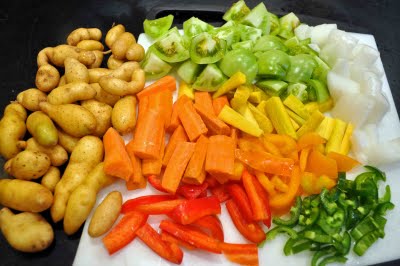 Here’s a pile of veggies from my CSA delivery – fingerling potatoes, carrots (both orange and yellow), peppers (both red and orange), onions, jalapenos – to which I added a big pile of quartered green tomatoes. 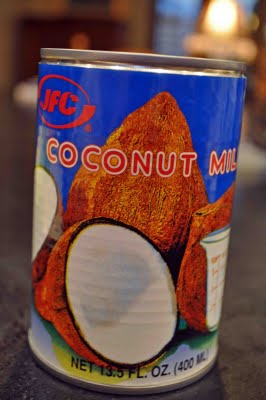 I had this hankering for something with coconut milk…there really is nothing like it. Sweet and savory at the same time, a bit decadent and exotic…mmmm. 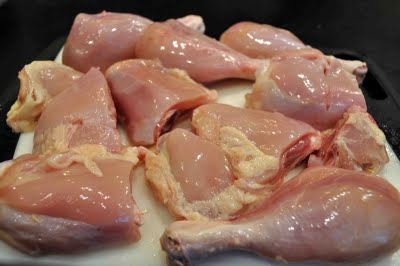 And I had all of these legs and thighs left over from my rancher from last year and wanted to use them up before I get new chicken from him this week. I know some of you are totally grossed out by any pieces of fat or such still hanging on to chicken pieces, so feel free to cut away any of that if you have the time or inclination – I’m a bit too lazy to bother! Do remove the skin for this recipe so it’s not rubbery. 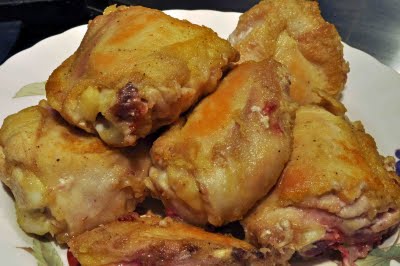 After a dip in seasoned flour, the chicken browned up nicely in a Dutch oven. The flour helps it brown but more importantly will later help the stew thicken as it cooks. 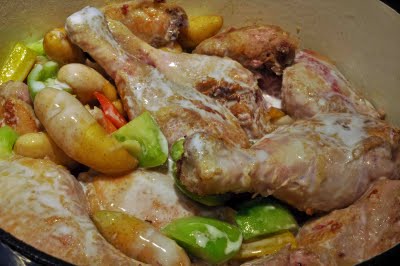 After sauteing all of those vegetables for just a couple of minutes I added the chicken back to the pot and threw in a can of coconut milk. You can see it wasn’t enough to cover it and create that stew consistency… 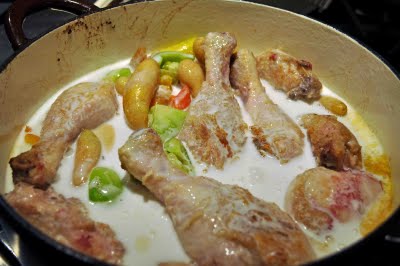 …so I added a second can and that did the trick. Cover on, into the oven, and an hour later I had this rich and delicious stew. 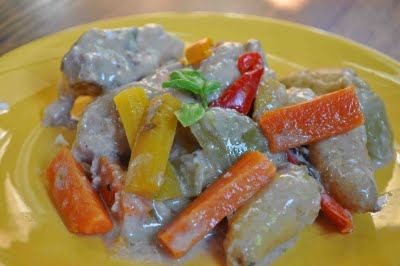 I love this dish – so you can imagine how bummed I was when I woke up the next morning to discover I had left the Dutch oven on the counter all night rendering the chicken dangerous and useless. Such a waste!

Mix flour, salt and pepper in a large plastic bag and add chicken. Toss to coat chicken. Heat oil in a large Dutch oven over medium high heat. Add chicken, a few pieces at a time, and cook until golden brown then turn and brown other side. Remove to a platter and repeat with remaining chicken pieces, adding oil as needed. Remove all chicken to a platter. Add all vegetables to the Dutch oven and saute for a few minutes. Return chicken to the pot and nestle chicken in the vegetables. Combine coconut milk and curry powder, then pour over chicken. Cover and bake at 325 for 1 hour. Season with salt and pepper to taste and serve over jasmine rice.