I’ve made a couple of really important discoveries this week – at least important if you have 30 pounds of green tomatoes sitting on your kitchen counter like I do. The first is that if tomatoes have even the slightest bit of pink on them, even if it’s just a small spot on the bottom, they will ripen up on the windowsill over time. 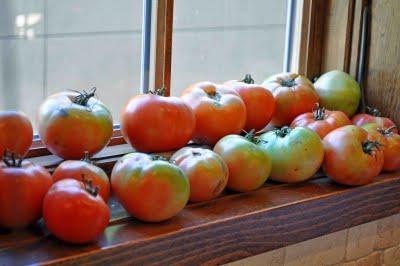 In fact, some that were sitting in my “totally green” pile on the counter actually seemed to sprout a small pinkish spot within the first 24 hours after I harvested them all so they “moved up” from the green pile to the windowsill. They are all faring well, ripening at their own pace, and will give me days, if not weeks, more of garden fresh tomatoes. 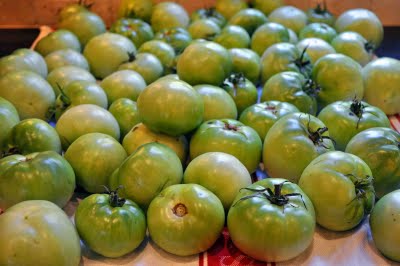 The second discovery actually came as more of a surprise to me – that you can put green tomatoes into just about anything and they seem to morph appropriately to that recipe. So far I’ve made things as disparate as Green Tomato Bread, Green Tomato Relish, and Fried Green Tomatoes, and today I give you… 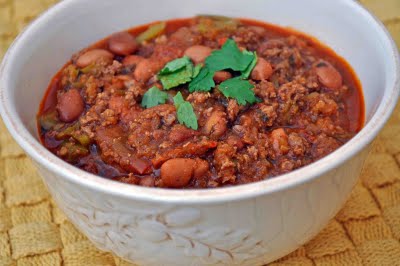 …Green Tomato Chili. I know chili is supposed to be a slow simmering and time consuming process, but I kinda like the quick variety using whatever I have on hand. So here’s what I threw together: 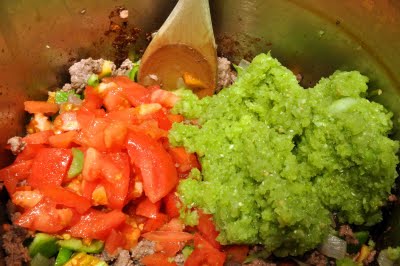 First I browned 1 pound ground beef together with 1 onion, diced. Next I added about 2-3 cups of diced Poblano and banana peppers (small, thin-skinned ones – if they are thick-skinned you will want to roast and peel them first), 1 cup diced red tomatoes, and 1-1/2 cups pureed green tomatoes. 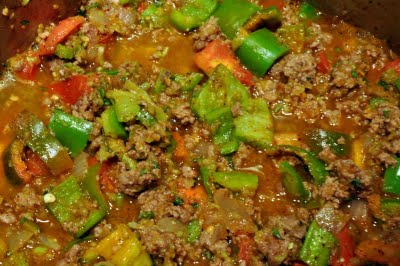 I mixed that all together and threw in my standard chili seasoning blend – a good amount of chili powder (1-2 tablespoons), cumin (2-3 teaspoons), coriander (1 teaspoon), salt and pepper – plus a little cayenne for kick but leave that out if you don’t want it hot. I let the whole thing simmer for about 20-30 minutes and guess what? Great quick chili with a nice level of acidity to it – you’d never even know there were green tomatoes in the mix.
Stay tuned – next up is a Chicken Stew with Curried Coconut Sauce and Green Tomatoes – you won’t want to miss it!