I’ve been waiting to redeem myself in a Foodie Fight battle ever since my last attempt where I forgot to photograph the final result, which seemed to annoy at least one of the judges. (Don’t forget to visit the Foodie Fight site and vote for me!) This time I submitted chestnuts as a possible ingredient, and was excited to see it combined with kumquats as they are both perfect holiday foods. Problem is, kumquats are not in any stores in CO yet (I looked at several) so I had to improvise there, even though I created the recipe for kumquats. 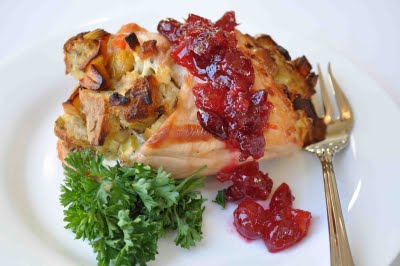 Does this look like Thanksgiving on a plate? Well, I figured I could create something that was mouthwatering and would please the judges but would also give a boost to my readers out there who are still struggling to come up with recipes for their Thanksgiving dinner. In this shot, I’ve used the stuffing to actually stuff a pounded out chicken breast (although this could easily be a turkey breast as well)… 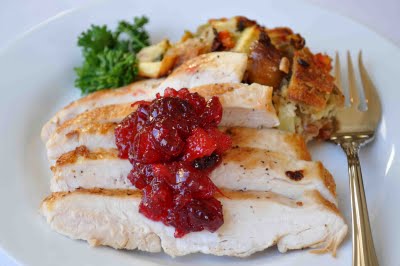 …while in this shot I cooked a separate chicken cutlet, sliced it, and served it with the dressing on the side and a generous dollop of the relish on top. There are so many photos to this post that I actually divided it into two posts – just read on and I’ll direct you where you need to go! 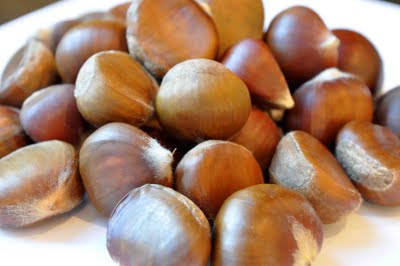 Let’s start with the chestnuts. You can find them peeled, but for some reason my store didn’t have that so I bought them whole in their shells, which allows me to educate you on how the heck you get them out of there. 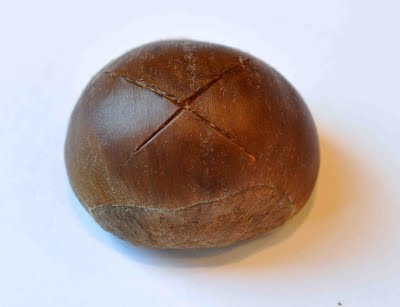 First thing you need to do is to score the shell with a knife. Some chefs are proponents of roasting them at this point, while others recommend boiling them. I did half each way to test, and boiling is WAY easier to peel. That X you cut will open up after simmering for about 20 minutes… 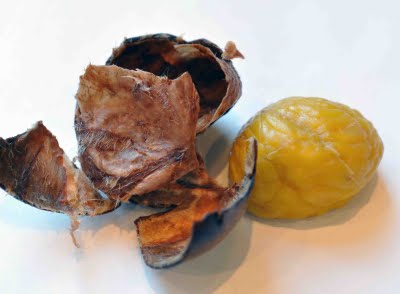 …then you can peel off both the hard outer shell and the inside paper coating to reveal the lovely chestnut inside. 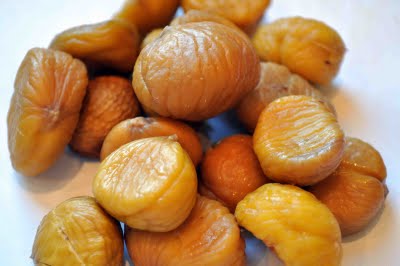 You’ll need about a cup of these chopped, so about 2 handfuls of the whole chestnuts should do it. If you can find the peeled ones that are vacuum sealed you’ll save yourself all of this work! 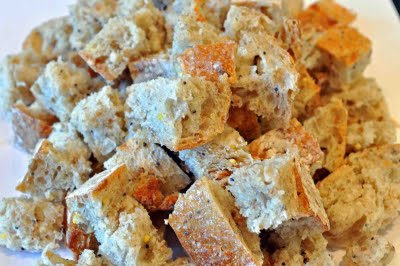 Cube up some bread – I like to use a nice crusty Italian loaf like a ciabatta or a rosemary flavored bread. 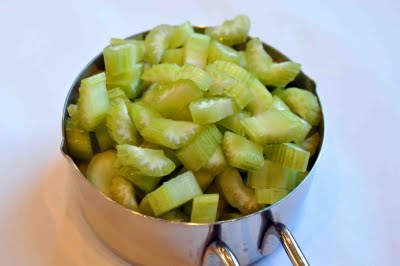 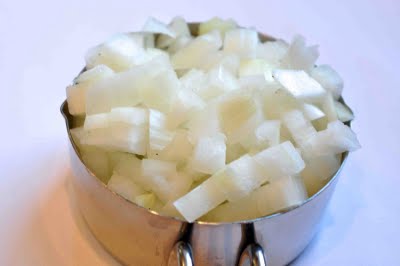 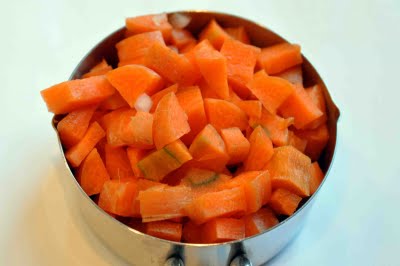 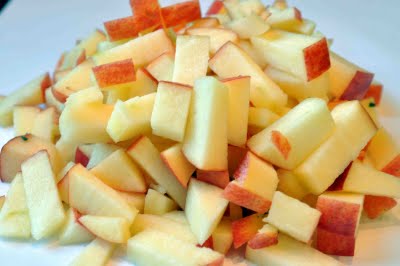 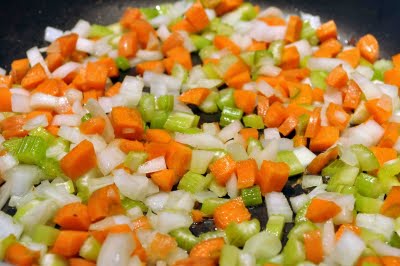 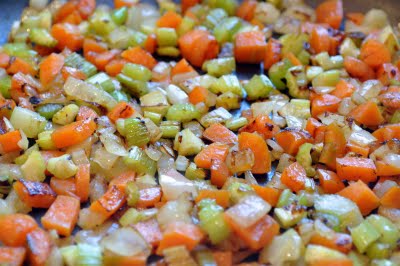 …until the vegetables are slightly softened and taking on some color like this. 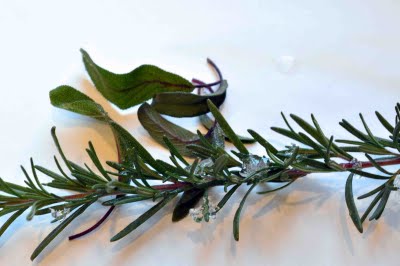 Next you’ll need some herbs – I needed to dig mine out of the foot of snow we got over the weekend (can you see the ice clinging to the rosemary?!). Chop up some fresh rosemary and sage. 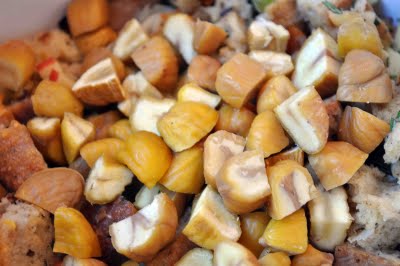 Then mix everything together – the bread with the vegetables, apples, herbs, and chopped chestnuts… 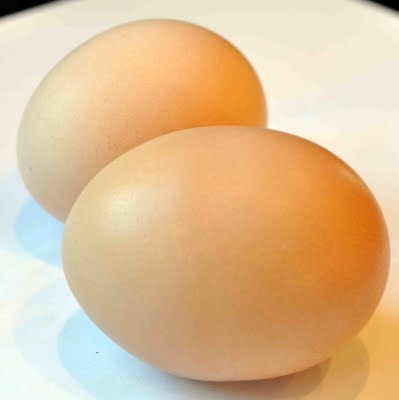 …and get your wet ingredients together. Mix eggs with water or stock and some milk or cream, season with salt and pepper, then stir into the bread and vegetables until it’s all absorbed. 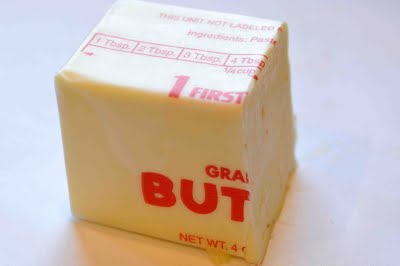 Then just to make sure it’s not dry, melt 1/2 a stick of butter and pour that in too. Stir it well… 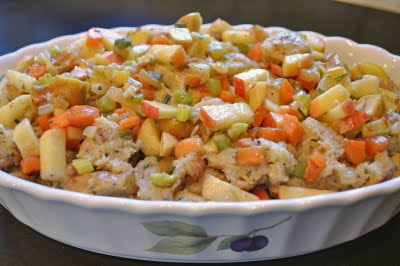 …and pour it into a casserole dish to bake – or if you prefer, stuff your turkey, chicken or goose with the dressing before roasting. 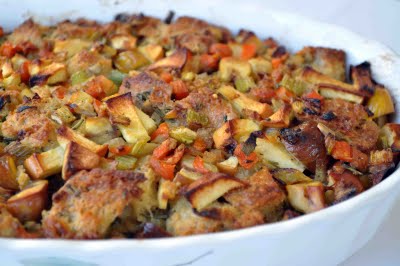 I like to cook my dressing separate from the bird primarily because then you don’t have to overcook the bird to ensure that the internal temperature of the stuffing reaches a safe level. But I also like the taste of the turkey juices that soak into the stuffing when you put it inside the bird. So when I pull my dressing out of the oven, I usually pour about 1/2 to 1 cup of turkey drippings over the top of the casserole dish before serving. Decadent? Yes. Delicious? You bet! 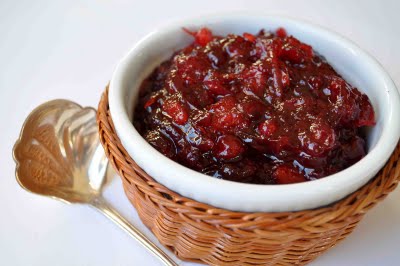 The second part of the challenge for the Foodie Fight was kumquats, and I created this fabulous relish intending to use them. Since they were unavailable I substituted the 1 cup of chopped kumquats in this dish with the zest of one orange, the chopped up orange segments from one orange, a good squeeze of orange juice, and the zest of half of a lemon. Visit this post to read the step by step details on how I made the relish.

Heat oil and butter in a large skillet over medium high heat. Add celery, carrots and onions; cook until softened, about 5-10 minutes. While vegetables are cooking, combine eggs, stock, salt and pepper together and whisk until well combined. In a large bowl, toss together the bread with the vegetable mixture, liquid ingredients, melted butter, apples, chestnuts, sage and rosemary. Put stuffing into an oven safe dish and press down into an even layer. Bake, uncovered, at 375 degrees for 45 minutes or stuff into chicken breasts or whole turkey and cook accordingly. (Note: I like to spoon turkey drippings over the top of the dressing before serving to flavor and moisten it.)

Combine all ingredients in a medium saucepan and simmer until the cranberries and kumquats have broken down and relish has thickened, about 30-40 minutes. Remove from heat, discard cinnamon and star anise, add wine and let cool before serving.

Keep checking back in the next few days for a couple more Thanksgiving side dishes you’ll want to make for your dinner!