How to Properly Poach Chicken

Do you ever have the problem that when you cook boneless chicken breasts they come out dry and chewy, even rubbery? It’s all in the technique. With little fat and all lean meat, it’s hard to keep them moist and tender. One underutilized technique is to poach the chicken. 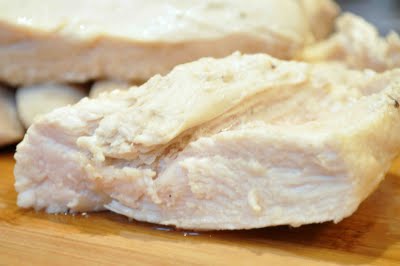 I don’t know if this photo really portrays just how tender and juicy this breast was, so you’ll have to take my word for it. And by the way, this chicken is free range all natural chicken which tends to be even tougher when prepared incorrectly. 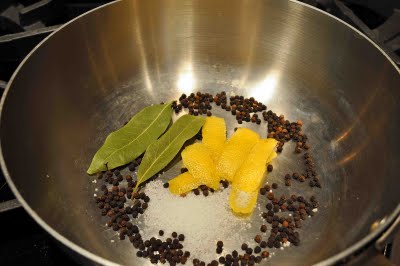 Poaching is simply cooking in barely hot water. That doesn’t mean a rolling boil, which will cook the chicken quickly and cause the meat to seize up and shrink and be nearly impossible to eat. I like to start with a base of seasonings in which to poach – it doesn’t have to be fancy but some lemon peel, a couple of bay leaves, some peppercorns, and some salt will impart subtle seasoning to the meat. 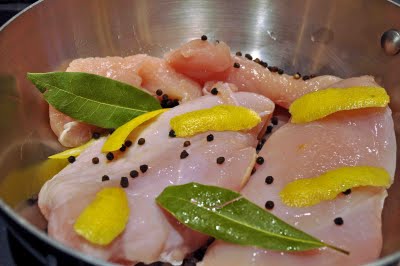 In go the boneless breasts – and notice that I have separated the tenderloins from the thicker breasts as they will cook more quickly and I want to remove them as soon as they are cooked. 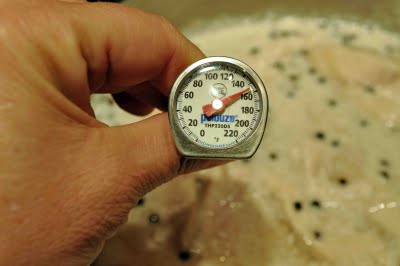 Focus on the thermometer here – you want the water temp to get up over 165 for safety reasons, but to remain under the boiling point, so strive for about 180-190. Check the water a few times and lower or raise the temperature on your stove to keep it at this temperatures. This is, by the way, how this trendy sous vide method of cooking works. You put the food into a sealed bag in water that’s kept at a constant temperature so your food is cooked perfectly to that final temp. Poaching on the stove is the layman’s way of doing this. 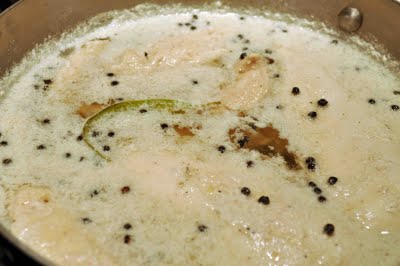 Notice it’s not boiling, and notice how disgusting this looks. Don’t let this send you running for the hills – just skim off the white residue that floats to the top of the pan while your chicken poaches. This is the same technique as slowly heating stock and skimming off those impurities along the way. Or if you’re lazy like me, just let it float there and keep cooking your chicken. 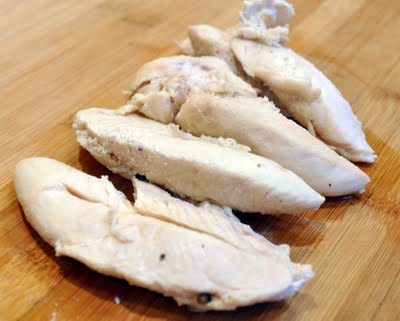 I pulled the tenderloins out earlier than the breasts themselves so they wouldn’t overcook. That’s really the only tough part of poaching – knowing when to pull it out of the pan. With time and experience you’ll know it by touch. But until you develop that skill, you’re looking for it to be barely cooked through (barely past any pink showing) at the thickest part of the breast. My first time around I cut it in half and checked and let it keep cooking a few more minutes. Poached chicken is perfectly tender for using in salads – either topping a tossed green salad or mixed into a chicken salad. If you’re not happy with the results of cooking boneless chicken breasts, give it a try!