I pride myself on most of my blog posts being my own creations, or adaptations of other recipes with enough creativity that I feel I’m presenting you with something original. But sometimes, you just can’t beat what someone else does. 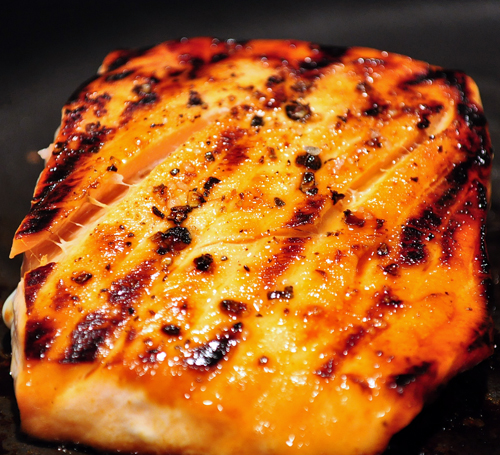 That’s the case with this simple, yet spectacular piece of seared salmon that I saw Giada do the other dayÂ on TV. (Yes, while working out. I’m a bit like a mouse on a wheel that keeps running around trying to get the piece of cheese. But at least I’m on that stupid eliptical trainer!) Her secret ingredient is agave. It’s like a very mild thin syrup or honey, but it’s healthier because it’s sweeter (so you use less) and it doesn’t appear to raise blood sugar levels as much as refined sugar. High blood sugar levels lead to a whole host of life threatening illnesses, which I’m all too aware of since my oldest son is at Type 1 diabetic. 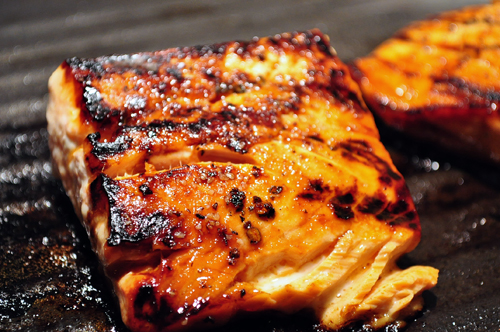 To make this gorgeous and succulent piece of fish for dinner, just brush a very small amount of agave nectar onto each side of the filet. I used about 1 teaspoon on each side, and used a pastry brush to spread it out (you could use your finger if you don’t have a pastry brush handy). Then sprinkle each side with salt and pepper and cook in a nonstick grill pan over medium heat until grill marks appear, about 3 minutes per side. Salmon retains its moisture better if cooked medium, meaning the center is still slightly darker, but if you prefer your fish cooked through, just cook it a couple of extra minutes, making sure the pan isn’t on too high of heat as it will burn with the agave coating. 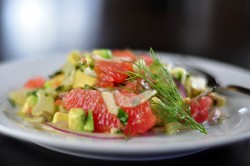 This fish goes perfectly with the Grapefruit and Fennel Salad with Avocado I posted a couple of days ago – just spoon a generous amount of the salad over the fish. The sweetness of the agave contrasts wonderfully with the tartness of the grapefruit. And like fellow blogger Joy said today, “this eating light thing isn’t half bad!”