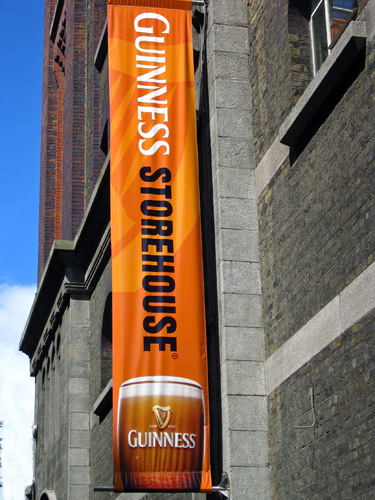 We got lucky again – another warm day of sunshine in Dublin as we set out for the Guinness Storehouse for a tour and a tasting. 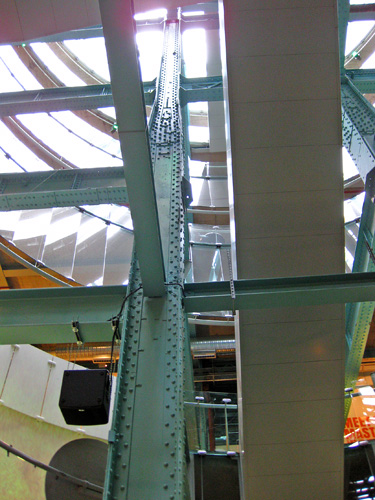 The structure of the Storehouse (which means a place of fermentation) was built in 1904 and modeled after the old Chicago school of architecture. Fortunately an elevator runs up through the inside of the building which helped us move through the levels. 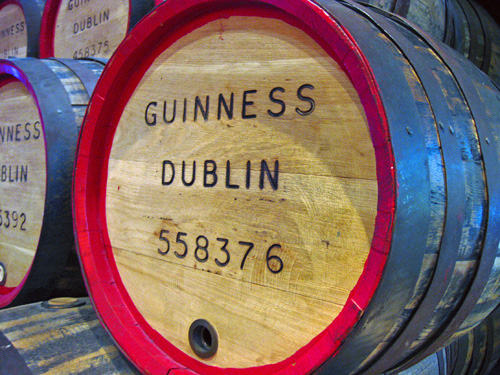 Each floor of the Storehouse shows a different aspect of the Guinness process – from raw ingredients of yeast, barley, hops and water to barrel construction to marketing and branding. When you look at the building’s floors all as a whole, with the glass surrounding each level, you can see that it’s modeled after a giant pint glass. 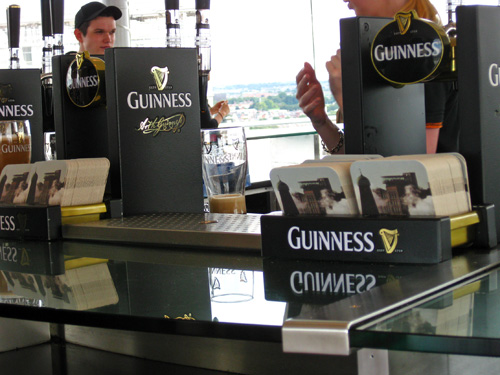 The tour ends in the Gravity Bar on the 7th level where your entry ticket is redeemed for a free pint (or my case since it was only about an hour after breakfast, a taste from a small glass). The real beauty of the bar is the circular glass design which allows you to check out the views over all of Dublin from high above the city. 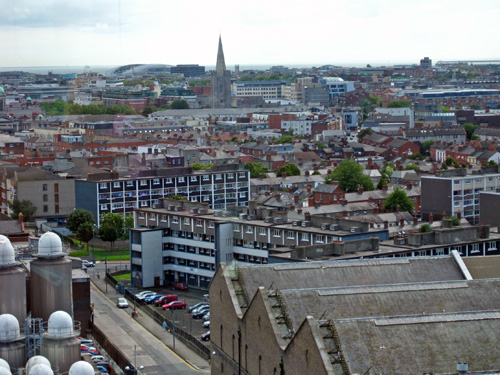 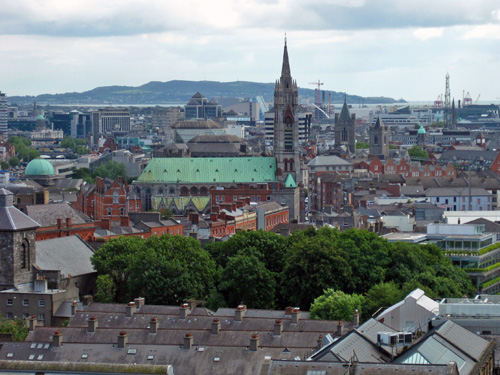 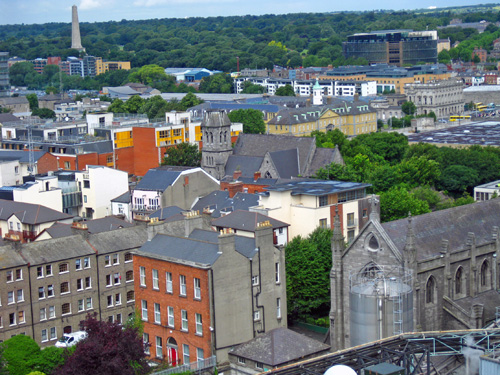 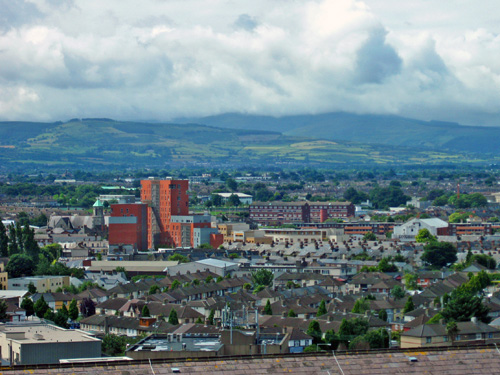 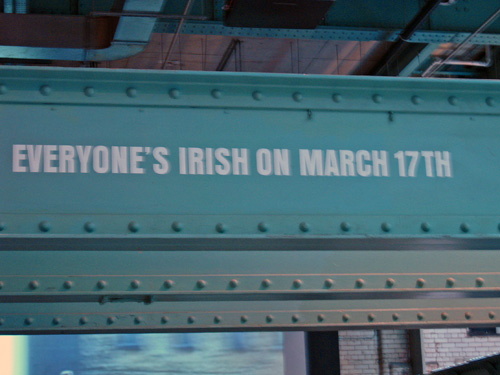 Indeed, after a few Guinness stouts (short for “extra stout porter”) and 10 days in Ireland, I am feeling a wee bit Irish myself! 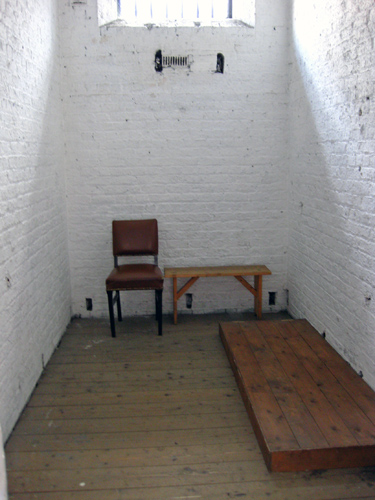 We traveled just a couple more stops past the Guinness Storehouse on the hop on hop off bus to reach the Kilmainham Gaol (jail). While this cell may look spartan and small, in fact it was a major advance over previous prisons because it offered individual cells which provided protection to inmates. Prior to that prisoners were all thrown into a single room together here – women and children as young as five included. 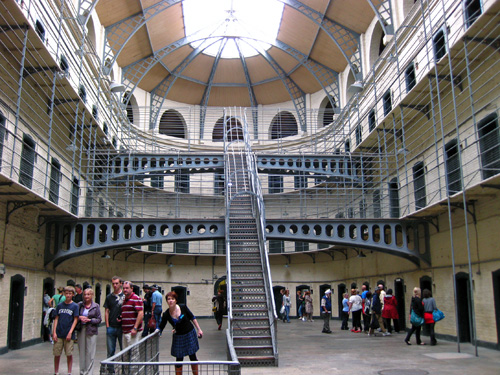 Still, this was no picnic as the jail sat on a hill with no power, water or windows, so was quite exposed and harsh. And as prison populations grew, there were multiple prisoners held in each cell. The jail is the site were the insurgents responsible for the Easter Rising were executed – which in turn led to much greater support for their cause. 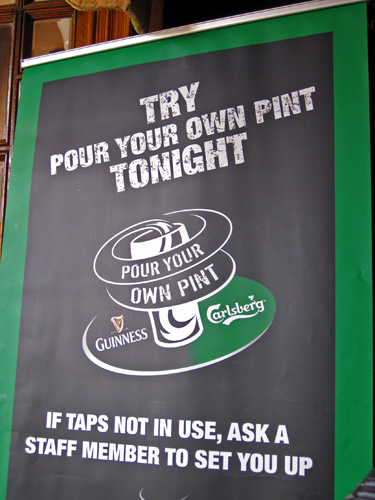 We only stayed for the first 10 minutes of the tour (which prompted the young man at the entrance to insist on refunding our entry fee, something I have trouble imagining happening in the US), and instead went one stop on the bus then got off across from a street filled with pubs to grab some lunch. They had something else I can’t imagine in the US – a “pour your own pint” bar setup. Large bar height tables are fitted with kegs in the center and two taps on top that register how much you pour over the course of sitting there and charge you accordingly. I can just see my son and his fraternity brothers now with this type of setup! 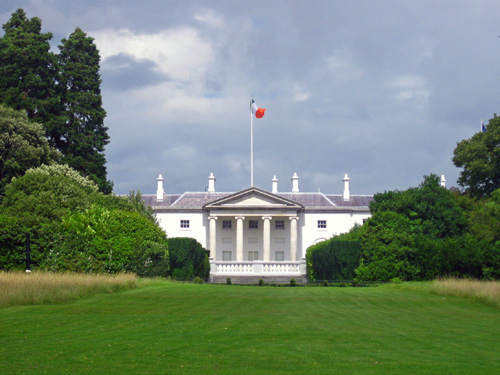 After lunch we boarded the bus again for the ride back to our hotel. I had photographed everything yesterday so didn’t bother except to grab this great shot of the back of the official resident of Ireland’s president Mary McAleese – it’s called Aras an Uachtarain and sits on a lovely spot out in Phoenix Park. In Ireland presidential terms are 7 years with a maximum of 14 years as president. She’s the second woman president in a row here and is currently coming to the end of her 2-term presidency. 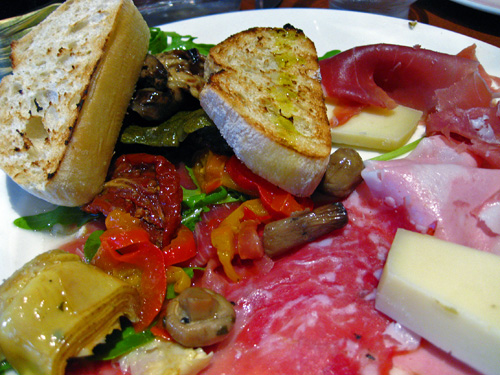 We hit the jackpot with Dunne & Crescenzi right next door to our hotel. Having spent alot of time in Italy, I can tell you this couple from Rome brought the real thing to Dublin. Food & Wine magazine and the New York Times agree! We started by splitting this antipasti platter along with a simple insalata mista between the three of us which was a perfect way to begin the meal. 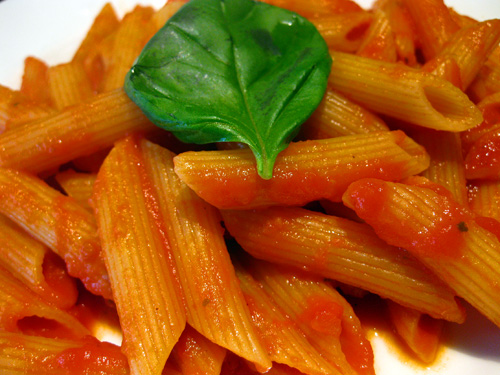 I opted for a simple penne pasta with a pomodoro e basilica sauce (to which I added ample Parmigiano Reggiano cheese). My parents made sure to get a dessert, but I was happy with my own version, a Vin Santo with some amaretti cookies to dip. 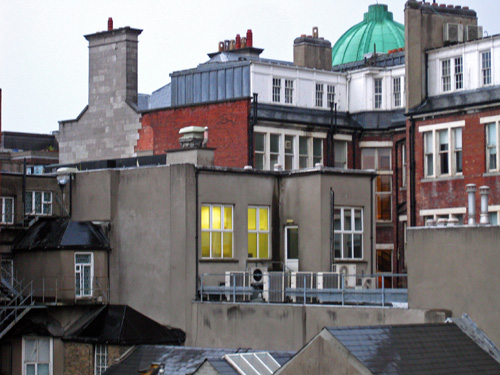 No sooner did we get back to our hotel than it became clear that the rain has settled into Ireland for the weekend (just as the cabbie suggested it might go). Despite being nearly 10pm, there is still a wonderfully eclectic view out the back of my hotel room – old rooftops mix with new architecture, all blending together in the late evening summer rain. Tomorrow morning we’ll be leaving early – I may or may not document the trip home, as I usually find it exhausting and boring. But know this as I sign off from Ireland – the scenery, the food, and the people here are all incredible, and well worth a trip here!