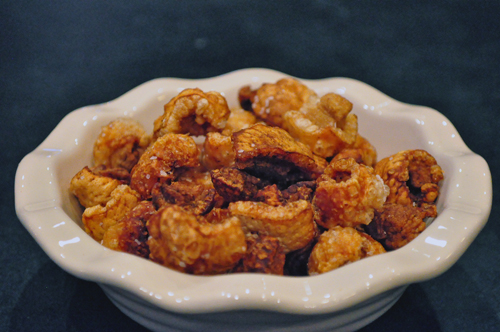 I can just hear the gasps now. What is she thinking posting something like this right after the holidays when she and the rest of us have all agreed to eat a little healthier!? For starters, I promised recipes from my Celebration of the Pig dinner, and this was one of the more talked about parts of the lineup. Add to that my commitment to using as much of the animal as possible and the sheer fact that these are yummy…well, there you have it. And besides, based on the amount of fat that was rendered out of these during the cooking process, I’m thinking maybe they really aren’t that bad for you after all!

To be more specific, pork cracklin’s, from what I have read, are actually small bits of pork skin with some meat and fat attached, while pork rinds are just skin and fat. Either way, you cook them down until the fat is really rendered out and you’re left with a tasty, crunchy morsel of pork goodness. I used these on top of the Pork Roast with Pan Gravy to give some texture and crunch to the dish. I actually put them on the side, but I think everyone gave them a try and most people asked for seconds, me included!

1 piece of pork skin, cleaned, with a small layer of fat attached

Cut into 1 inch squares with a sharp knife. Heat a large Dutch oven over high heat and throw in a handful of the pork pieces to let them start rendering fat. (Alternatively heat 1/4 cup bacon grease in the pot to start.) Add remaining pork pieces and cook, over medium to high heat, until cracklin’s have fully rendered out all of the fat. This process takes a long time – perhaps an hour or more. You’ll know they are done when they take on a puffed up appearance like a cheese puff and can be easily chewed. If you remove them too soon they’ll be tough and inedible. Drain on paper towels and sprinkle liberally with salt while still hot.

Note: pork skin can be difficult to locate – try calling a specialty butcher shop like Marczyk Fine Foods in Denver which is where I found mine.