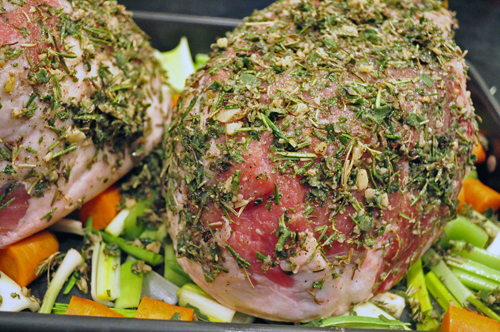 My Celebration of the Pig dinner for New Year’s Eve was delicious and a huge success, other than the very large second degree burn I inflicted on myself with bacon grease. Note to self: wear oven mitts when handling a baking sheet full of hot grease! Note to readers: if you ever get a grease burn, it’s critical to immediately get it under cold running water and pretty much keep it under cold water or a cold washcloth until it stops burning, which in my case was about 14 hours later.

I promised to share a few of the recipes with you here, and I’ll start with the star of the evening, the roast. I don’t really like cured ham, so asked my processor to leave the hams fresh, and I used both of them for this dinner, although it was far more meat than I needed for my 12 guests. But if you cook more, you can use the leftovers as I did yesterday to make some soups and stews. I used 2 pounds of cut up cubed pork for Pork, White Bean and Kale Soup, and another 2 pounds of pork for Pork Green Chile Posole. Both of these freeze well and will make for a tasty lunch or dinner in a hurry on those days I just don’t have time to cook.

The pan gravy is what really makes this roast delicious, so don’t skimp! And make sure to use the rack of vegetables to roast the meat – it’s the vegetables with pork drippings, fully caramelized, that create real depth of flavor and a nice dark brown color in the gravy.

Lay the vegetables in the bottom of a roasting pan to form a rack, then lay the ham, fat side up, over the vegetables. In a small mixing bowl, combine the sea salt, rosemary, thyme, sage, garlic, pepper, mustard, and olive oil to form a paste. Massage the ham with the spice rub paste and drizzle olive oil over the roasts and cook in a very hot oven (450-500 degrees) for 30 minutes. Reduce heat to 350 degrees, pour the chicken stock around the roasts and pour the beer directly over the roasts. Cover loosely with foil and continue to roast until the internal temperature reaches 155-160 degrees. Remove the ham from the pan and cover in foil to rest for 30 minutes. Place roasting pan directly over two burners and add 2 cans of chicken stock. Bring to a simmer, using a wooden spoon to loosen all caramelized vegetables from the bottom of the pan. Strain pan drippings and discard solids. If desired, skim off excess fat. Make a roux in a saucepan with the flour and butter (1-2 tablespoons of each for each cup of liquid), then whisk in pan drippings until thickened. Season with salt and pepper to taste and serve with sliced ham garnished with watercress sprigs.