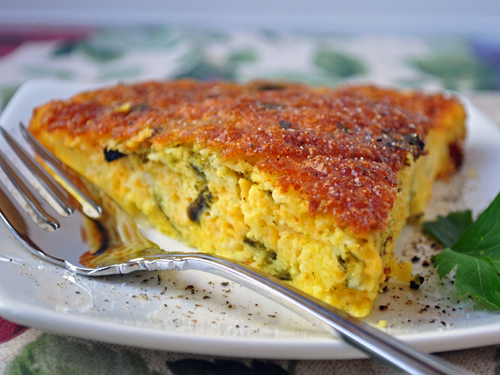 Somehow this recipe escaped being posted, but I know you’re going to want to know about it. A couple of months ago when we were visiting friends in Glenwood Springs (near Aspen), the hosts served this for brunch on Sunday morning. While we tried to refrain from overindulging in it, it was so divine we had seconds. It’s a simple recipe that you throw together and bake, but beware, it’s not diet food, so you’ll probably want to save it for a special occasion. I made it for Mother’s Day, and it was a hit!

Print
Prep time
5 mins
Cook time
45 mins
Total time
50 mins
Adapted from Mary Gould
Recipe type: Breakfast
Serves: 8
Ingredients
Instructions
Notes
Although it may seem like alot of cheese, don't be tempted to reduce it or use low fat versions. The dish gets it's rich flavor and texture from the cheese and you'll be disappointed if you skimp!
Wordpress Recipe Plugin by EasyRecipe
1.2.4