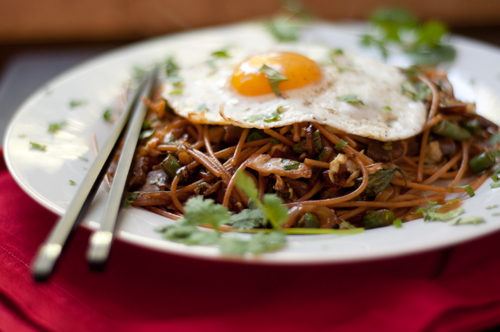 Are you one of those people who just loves vegetables? One who literally can’t name a single vegetable you hate (other than beets or Brussels sprouts)? Well, I’m the opposite. I do love quite a few – tomatoes, corn, broccoli, red peppers, potatoes, cucumbers, lettuce, greens, onions, fennel, beets, celeriac and more. But there’s another list, just about as long, of things I really don’t like. 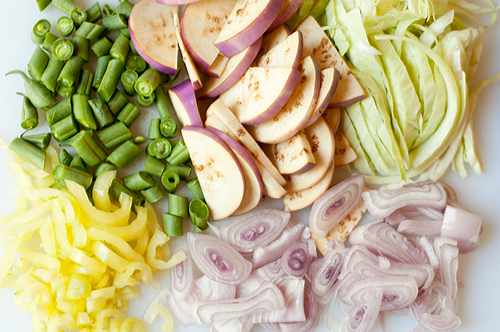 These are the vegetables I need to do something to in order to stomach them. Asparagus – must be roasted and with balsamic glaze or forget it. Carrots – I have to be really hungry to crave one of these. Cauliflower – just smells like sulfur to me. Peas – I’ll blame that on being forced to eat them as a kid. And then this motley crew – cabbage, eggplant, green beans (only way I truly love them is with crispy pancetta dripping with bacon grease), and banana peppers. I shouldn’t lump the lovely shallot, which I also have sliced here, into the mix – I LOVE them. 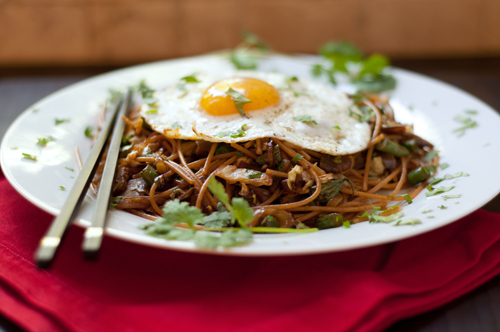 So after reading my blogger friend Kirsten’s great looking recipe for a simple Asian cabbage stir fry with whole wheat spaghetti, I had an idea. If I stir fry all of these with enough seasonings – sesame oil, fish oil, soy sauce, chili oil, ginger, cilantro – and mix them with some cooked pasta, and top if I top it with a fried egg whose runny center will enrich the sauce, then maybe – just maybe – I can love these vegetables too. Well, love is a strong word, but I did eat this entire plate…except a few eggplant slices which I just couldn’t finish. Whether you’re cooking for yourself or a picky spouse or kid, adding interesting new flavors can sometimes take it from yuk to edible!

Asian Stir Fried Vegetables and Pasta with a Fried Egg