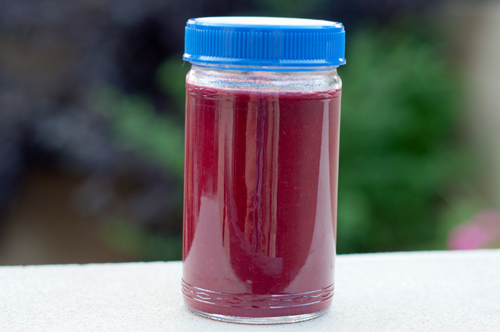 There is only one thing more prolific than zucchini in my yard this year, and that would be plums. 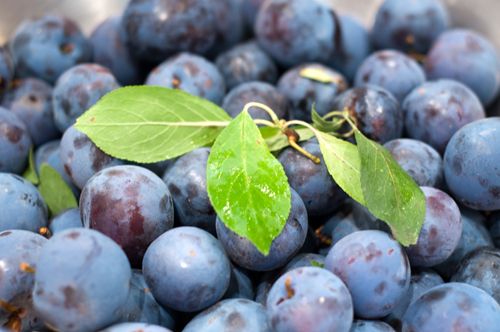 I’ve harvested about 1000 plums from two very small trees in my yard. One tree is only a year old, and the other is 3 years old. They took a break last year, but have made up for it this year. I’ve eaten enough plums to make myself sick. I’ve given away bags of them to friends and family. I dried about 500 of them this past week. But I still had a quite large bowl left this weekend, some of them a bit over-ripe, so I decided to make a simple plum sauce that could be used at a later date. If your plums are nice and ripe, you simply halve them with a sharp knife and the pit will fall right out. 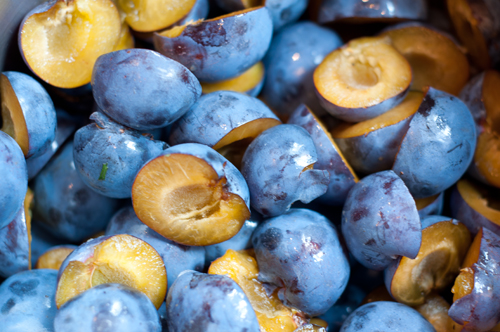 Put all of those halved plums in a large stockpot and let them simmer, covered, until the flesh has completely broken down. I didn’t add any sugar because the plums were so ripe. When they are pretty much mush, and have turned a gorgeous dark purple color (thanks to the skins much the way grape skins color red wine) pass them through a food mill and discard the solids. What’s left is a heavenly thick plum sauce that can be used in both sweet and savory ways: sauce pork chops, on beef, over ice cream, drizzled on waffles and pancakes – or as my friend whom I gave a jar to said this morning, just slather some on toast. There is nothing in the sauce to preserve it, so if you make a large batch like I did (6 or 8 16-ounce jars), you’re best to put it into smaller containers and freeze it.

Don’t you love the satisfaction that comes with a good harvest? Did anything do particularly well for you this year?