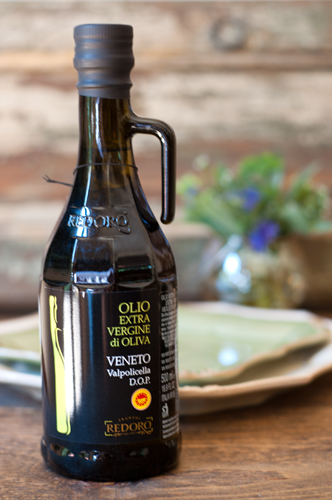 Every once in awhile life gets in the way of blogging. I guess that’s a good thing, because life wouldn’t be very interesting if the only thing to do was blog. But I feel badly when I don’t provide new content for my readers on my normal schedule, so I’m throwing in a special Friday giveaway of this very special extra virgin olive oil from Italy.

The Frantoio Redoro oil is a family business and the oil comes from olives cultivated in the hills around Venice – Nostrano, Favarol and Grignano olives, to be exact. And as I hope you have gathered by now, I’m a huge fan of the real thing – extra virgin olive oil, preferably from Italy for me. You’ll find lots of recipes on my site that call for extra virgin olive oil. Here are just a few.

Remember, these olive oil giveaways are brought to you by the wonderful folks at Gourmet Cooking & Living. I’ve been buying oil from them for years, and they are one of only two sponsors I’ve selected at this time for this blog. Show them a little love and check out their site. Then leave me a comment about something new you learned about Italian olive oil and you’ll be entered for a chance to win a bottle of the Frantoio oil. I can only ship domestically – and the winner will be chosen on Monday.

Hope you all have a great weekend!