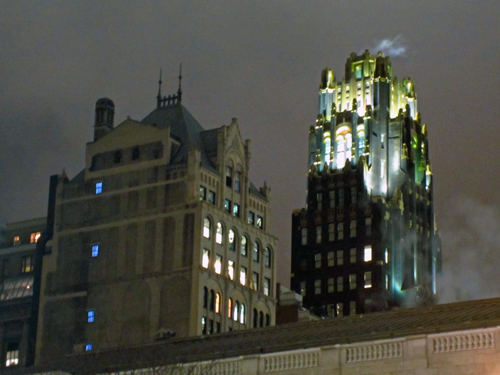 I went to New York a few weeks ago to see my son and it was one of those whirlwind trips – a long flight, only there 45 hours in total, then a long flight home. But we managed to not only get done what we set out to do – take a trip to Ikea in Brooklyn and build him a desk set for working from his tiny apartment – but we also managed to fit in 4 great meals, three at places new for us to try. 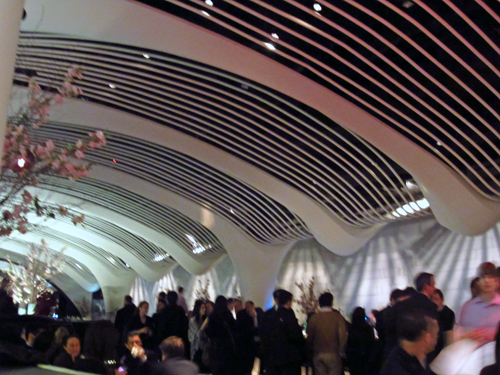 First up, STK in midtown. We had originally tried to go to The Bar Downstairs, a trendy spot in the newly opened Andaz, but they somehow messed up our reservation and it was a long wait. Fortunately, STK is right around the corner. It’s new, trendy, and cool too, as you can see. 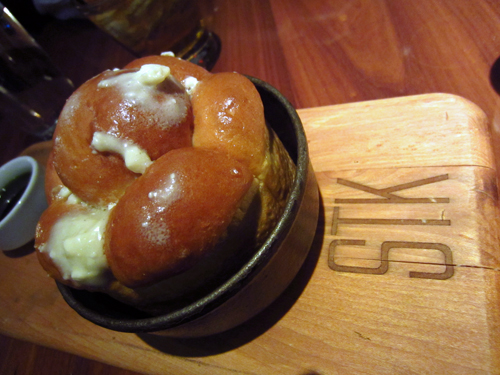 But beyond that, they start you off with these hot dinner rolls slathered in melting blue cheese butter. Both my son & I are trying to lose a few pounds, but we couldn’t resist having some of this – yum. 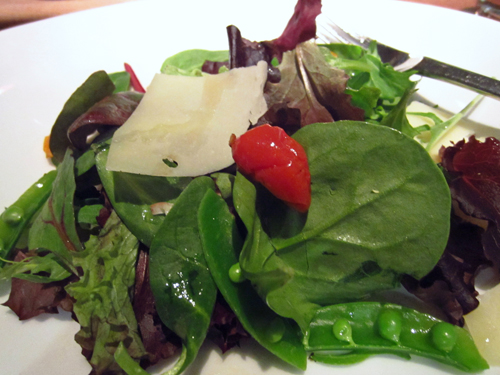 As if to erase those calories, we both had a green salad instead of some other appetizer. I like when a place does a good job on a mixed salad – this one had spring peas, great tomatoes, and some wonderful shaved Parmigiano Reggiano cheese on it. 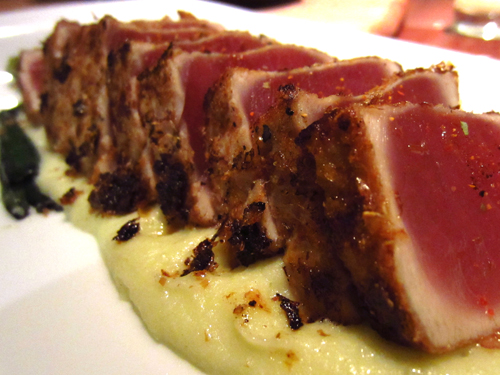 The tuna came perfectly seared and rare, just as I ordered it, and was floating on just the right amount of wasabi mashed potatoes. 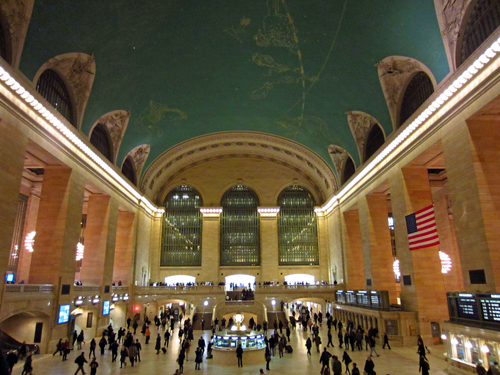 Although I’ve been to New York many times – several in the last year alone – it’s always cool to see iconic images of the city like the lit up interior of Grand Central Station at night. 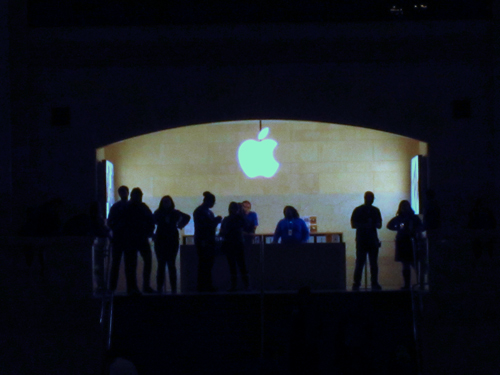 On the second level inside the station is the new Apple store. It’s been said that the Fifth Avenue Apple store is the highest grossing retailer on all of Fifth Avenue, and I’ve heard they get a ridiculous number of visitors to the store each month, so I’m guessing this makes it easier for regular old New Yorkers to get help without battling the tourists at the Fifth Avenue store. 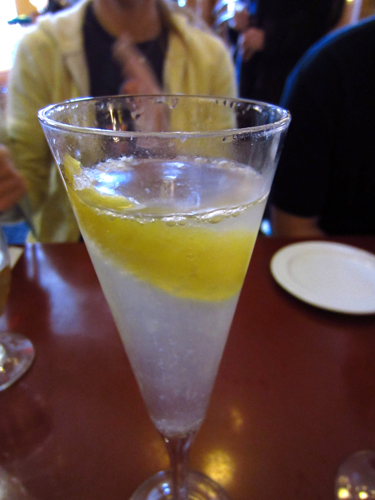 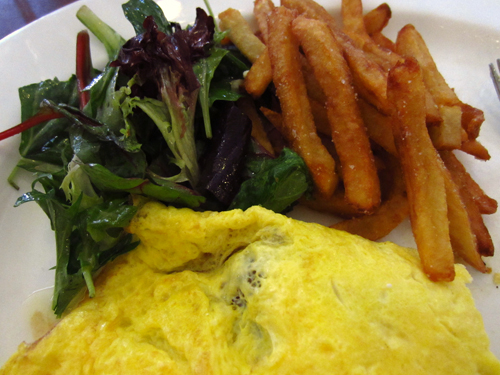 After our morning trip over to Ikea, we came back to the upper east side for some nourishment before beginning the assembly project. I’ve been to Cafe D’Alsace before – the last time I dined alone and wrote a post about dining alone – but we were her for the Saturday brunch. A French 75 for Jon’s friend, a mimosa for me, a beer for Jon, and then a perfect French brunch of an omelet with a mixed green salad and crispy fries. Oh, and there was bacon – but that’s never around long enough for a photo! 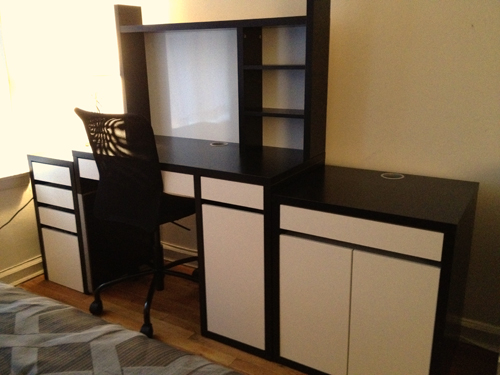 After several hours of assembly, only a little swearing, we had put together a file cabinet, a desk with an upper set of shelves, a storage unit, and a chair – we couldn’t wait to get showered and meet up with friends for dinner at Il Gattopardo. I keep a long list of recommended NY restaurants (contact me if you want to know anything), and this was on there for some time. 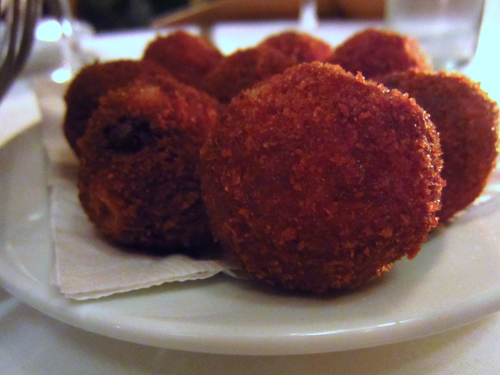 Don’t you love when a chef presents you with a little present to start? These arancini were a perfect fried morsel to accompany our Franciacorta sparking wine. 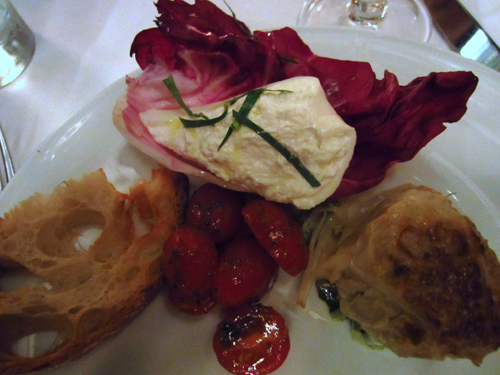 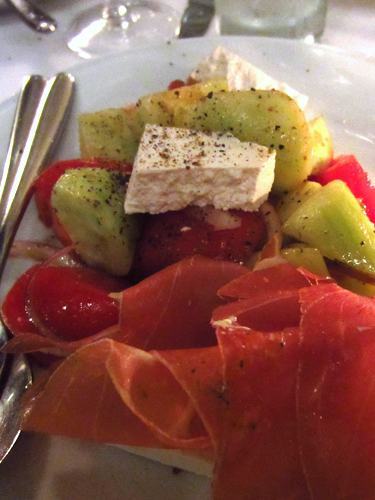 When you have several people dining together, I always like the idea of ordering lots of different things to share. You get to try more of what the restaurant has to offer than if you just order your own dinner. So we had a bevy of antipasti, including imported burrata, prosciutto, tomato and cucumber salad with ricotta salata, crostini and more. 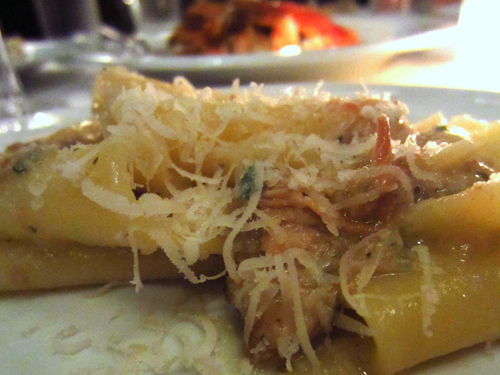 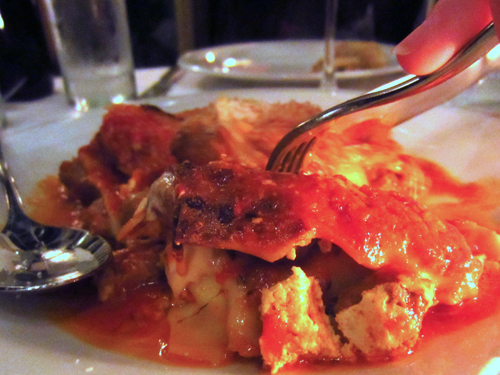 The four of us also shared 2 pasta dishes – a wide flat noodle with a pork ragu of sorts and a lasagna with tiny veal meatballs layered in. Delicious – really great – just like Italy. 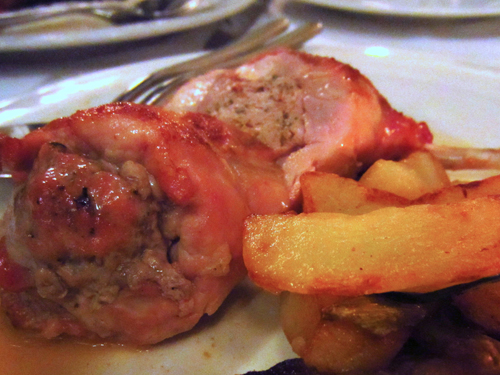 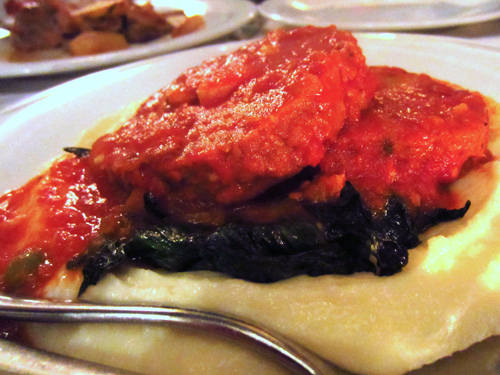 When I see rabbit on a menu, I usually like to order it since you don’t find it all that often. When I asked our waiter what other secondo he might recommend, he immediately said the meatloaf. Kind of a weird thing to be your top recommendation – but I happen to love meatloaf and also believe in taking the advice of a waiter when you ask him for it. It was velvety smooth, I’m sure thanks to the addition of veal. 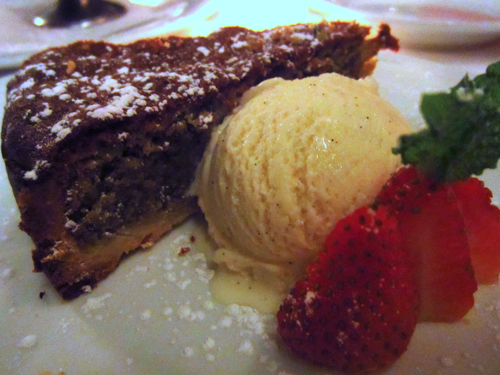 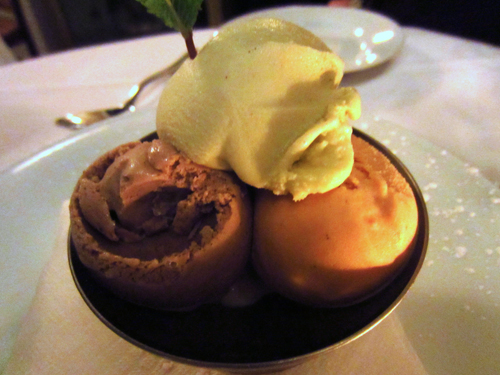 I was too full to even sample the dessert – a pistachio cake and a bowl full of gelato – but the guys in the group managed to help us polish it off. 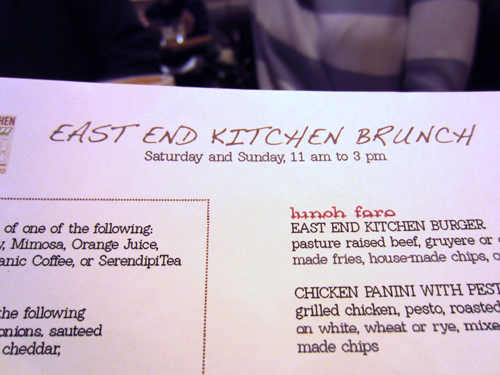 Carrie from the Sex in the City gang once said, “There are very few things this New Yorker loves as much as Sunday brunch. You can sleep until noon and still get eggs anywhere in the city, alcohol is often included with the meal, and Sunday is the one day a week you get the single woman’s sports pages: the New York Times wedding section.” And so it is that my son almost always meets friends for Sunday brunch – trying to find someplace new each time, and in this case trying to find something on the upper east side so I’d be able to get to LGA in time for my afternoon flight. 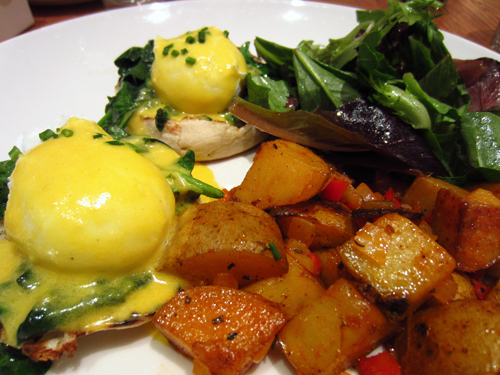 The East End Kitchen is an adorable spot, and if I lived anywhere near there I’d be a regular. True to Sunday brunch form in the city, it comes with a mimosa. I don’t usually get fancy eggs, but knowing this would probably be my only meal of the day based on my flight schedule, I ordered eggs florentine, accompanied by some good pan fried potatoes and a mixed green salad. Sunday brunch like it should be served. A weekend in New York like it should be enjoyed – full of time with my son and plenty of great meals.