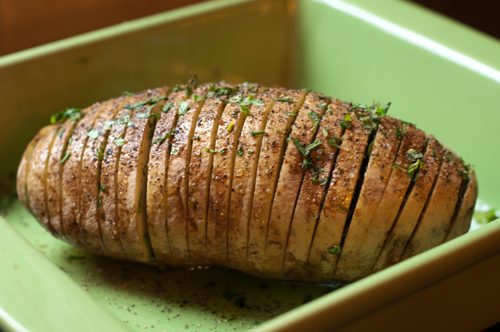 I’ve been watching bloggers write about hasselback potatoes for the past two years. Like many people out there, I was smitten with how cute they looked. I also spent a fair amount of time drooling over the various preparations, most of which were made with butter, and many that were loaded with cheese. I knew I wanted to make these, but it took me a trip to Italy where I tasted some incredible olive oils in the Sabina Hills to figure out how I was going to make my own version of a hasselback potato. 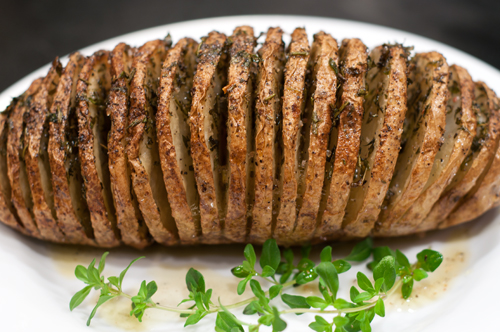 I read somewhere that these were created at the Hasselback Hotel in Stockholm, Sweden. Whoever dreamed it up was quite clever, as the cutting technique (sliced, but not all the way through) exposes all of that potato surface to roast. So you get the texture and flavors like you would in roasted potatoes, but in this pretty presentation. I decided to flavor mine with herbs, extra virgin olive oil, and sea salt. Pretty great combination, if I do say so myself, but feel free to change yours up if you like. Just make sure to roast them until the potatoes are fully cooked through, about an hour or so for a large potato.