Apple and Brie Quesadillas – and a Cocktail Party Menu 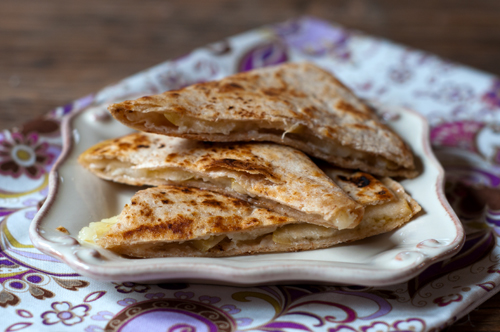 If you’ve been following along, you know that I had quite a week of catering last week. The biggest event was a cocktail party with food for 90 people – I’m not entirely sure, but I think that might be the biggest event I’ve done yet, and I’m happy to say it went beautifully. The hostess had an apple and brie quesadilla in mind when we were building the menu together, and I was happy to oblige. 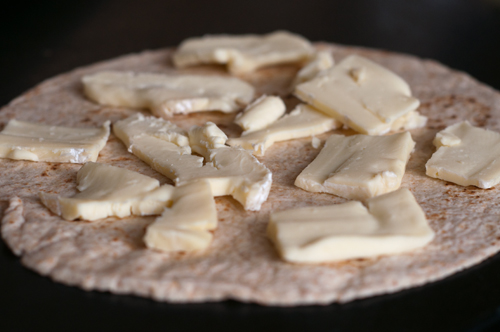 Making these quesadillas couldn’t have been easier – except when you’re making 40 of them it takes about 2 hours! You simply lay some thinly sliced brie cheese on a whole wheat tortilla… 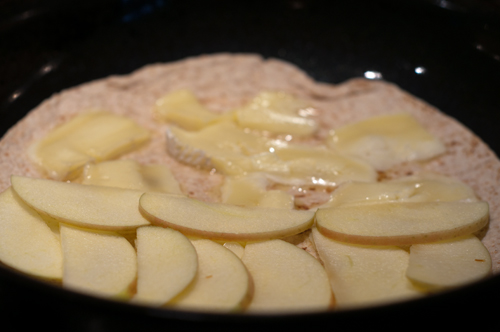 …then layer half of the tortilla with thin apple slices. I found that about 1/4 of an apple works well for one serving. Cook in a nonstick skillet over medium heat until the cheese is melted and the tortilla is lightly browned and crispy, then fold in half over the apples. 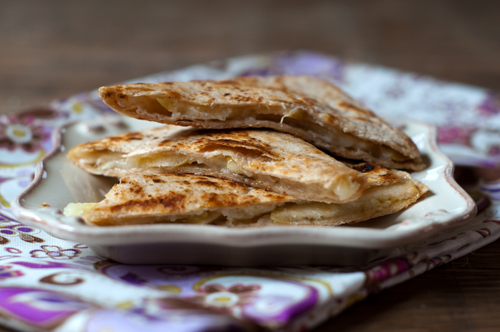 Remove to a cutting board and use a pizza cutter to cut into wedges and serve. Yum. Equally good as a party appetizer or for breakfast!

In case you want to copy the full menu for a party of your own, it included:

Chicken and Pork Meatballs (made just like these only half pork and half chicken) Stuffed with mozzarella with a Marinara Dipping Sauce
Shrimp with Romesco Sauce
Crudite Platter of Vegetables with Classic Hummus
Polenta Bites (cooked polenta, spread into a baking sheet, cut into squares and topped with pesto, mozzarella and sun-dried tomatoes)
Beef Crostini spread with Bearnaise Sauce and topped with Thinly Sliced Beef Tenderloin (tip: chill the bearnaise sauce after making it and it will spread like soft butter on the crostini)