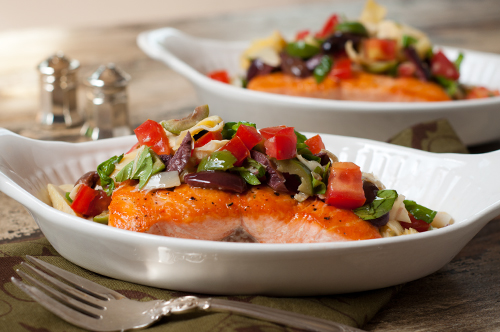 While just about everything about launching my cookbook has been exciting, I must say I got a small thrill when my publisher called to tell me that all 10 stores in Costco would be carrying the book. More than the obvious value of selling large volumes, for me, Costco’s decision to carry the book feels like an endorsement of the book’s broad appeal not only as a cookbook but also a great gift item. It landed in stores on the April 15th (just in time for Mother’s Day!), and Costco invited me to do some book signings with a couple of their stores this week:

Come visit your favorite warehouse store on Friday or Saturday, stock up for the weekend, and pick up signed copies of Tasting Colorado! In the meantime, enjoy one of the lighter, healthier recipes from the book – just in time for spring.

And because some of you have asked about the photography in the book, here’s the spread of some of the photos I took for this recipe. I had a vision for the photos in my book – white and neutral dishes, some unexpected sparkle from silverware or glasses, and lots of rustic wood backdrops. For most recipes, I shot between 12 and 20 photos, with varying styling and props.

I photographed the food with a fixed 50mm lens set to f/3.5 – f/4.2 for most dishes, and made sure to shoot from a variety of angles. For those of you struggling with lighting for your food photography, I shot everything in the southwest corner of my family room where there is a french door on one corner and a window on the other. With the right camera settings and a tripod you just don’t need more light than that. I did use a scrim to diffuse the light if it was landing directly on the food, and rarely used artificial light in the book.

Tasting Colorado: Favorite Recipes from the Centennial State showcases the dazzling variety of Colorado’s cuisine, from classic Western fare to innovative fusions of global flavors. Mouthwatering photographs complement 120 recipes both simple and sumptuous from Colorado’s finest restaurants, lodges, and bed-and-breakfasts. For a fresh take on fabulous food, sample these irresistible dishes from the Centennial State:

Michele Morris, a chef and sommelier, is the owner of Cooking with Michele®, where she teaches cooking lessons for both adults and children and develops recipes for corporate clients. As a freelance food writer, she has contributed to numerous local and regional publications, and is the author of a popular food blog offering recipes, tips, menus, and more. Michele is also the author of A Taste of Washington (Farcountry Press, 2014). She is passionate about helping others eat local and seasonal food and volunteers extensively, teaching school children and their parents just how easy it is to make healthy, real food at home. With her three children now independent young adults, Michele enjoys traveling and exploring local cuisines.