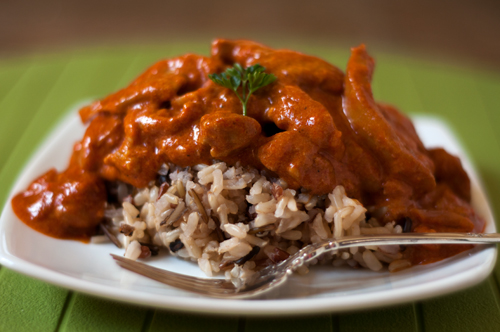 Are you one of those people who avoids chicken because it can be so bland and boring? I am – in fact, I’d sooner reach for just about any other meat before chicken. But chicken can be quite lean, and therefore is a good lean protein choice in our diet. Plus I had some chicken in the freezer giving me the stink eye every time I opened the door and chose something else. I’ve been wanting to create a simple version of this classic Hungarian stew for some time. You know my style: use just a few ingredients that would be considered traditional and you’ll end up with something close enough. And while the traditional recipes call for sour cream, that’s not really part of the carb cycling nutrition plan I’ve been following, nor would be the dumpling type of egg noodles they usually serve this over. Not to worry; I had the perfect substitutions in mind. 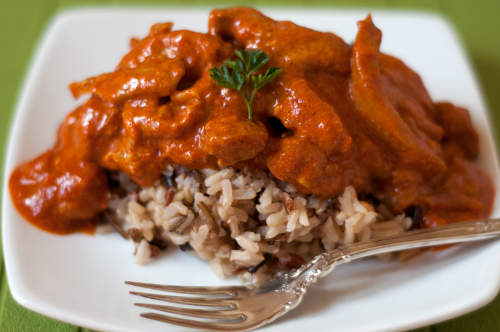 You’ll see many Paprikash recipes calling for actual peppers, but I didn’t use them in this simple to prepare weeknight kind of dish. I substituted nonfat Greek yogurt for the sour cream and nobody would know the difference. I didn’t have sweet paprika, so used smoked instead and it tasted just fine – just a little smokier. I pressed about 4 cups of thawed frozen tomatoes from this summer through a food mill and tossed the solids. That left me with a very thin tomato sauce that was really more like tomato juice. I simmered it a bit to reduce by about 1/4 before using it, then let the entire stew simmer until it was reduced and thickened, a great technique resulting in the velvety sauce you see in these photos. Finally, I served this over wild and brown rice to include a complex carb, but you could serve it over egg noodles, spaetzle, or dumplings as well. It’s easy, it’s healthy, it’s fast, and it’s tasty. Just right, I think, for making chicken more interesting.