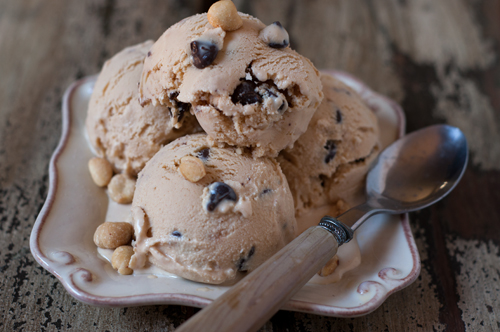 I know last month was actually National Ice Cream Month, and I should have gotten around to this recipe then. But August in Colorado is every bit as hot, and frankly this ice cream is so great (assuming you like peanut butter cups!), that I’ll be eating it all year long. 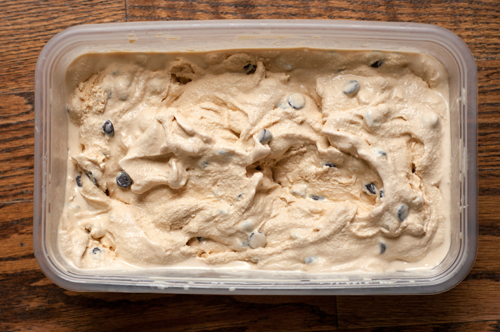 I learned something new in the kitchen when making this recipe. I had frozen some egg yolks from some time back and when I went to thaw them for use in the ice cream, they were nearly solid gelatin. I did some research and found that egg yolks will do this when frozen unless you mix something into them. Since mostly I’m saving mine for sweet preparations, the proper thing is to mix in about 1 1/2 teaspoons of sugar for each 4 yolks to keep them from gelling. Next time I’ll know! 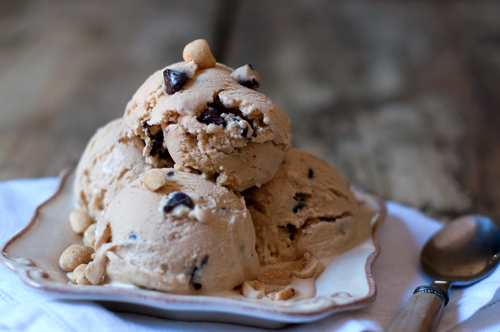 This recipe follow a basic custard ice cream but with peanut butter melted into the mix. I think the ratio of peanut better is spot on, but you could also use only half of the peanut butter in the ice cream itself, then swirl the remanning half in ribbons through the semi-frozen ice cream before you put it into the freezer to set up firm. I left peanuts out of mine, opting instead to sprinkle them on for garnish, but by all means mix some in if you like that texture and flavor. And had I had them on hand, I would have definitely chopped up Reese’s peanut butter cups to use instead of the chocolate chips in the recipe, just like they do at Ben & Jerry’s. Here’s to summer!