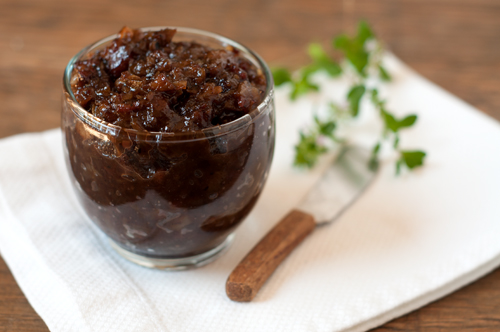 I’m having friends over this weekend for a casual, early Sunday night dinner. That’s what happens when your kids are grown and gone: you take advantage of “off nights” to get together, have more brunch with friends, and even go out on “school nights”. For those of you still in the thick of raising kids, I promise you that you are going to love this relaxed stage of life! It’s been years since I made a burger even though I do love them, so on Sunday I’ll be making burgers on the grill, made from Colorado bison. I’m hoping to dress up the menu a bit, so this Bacon-Onion Jam is going to be perfect. 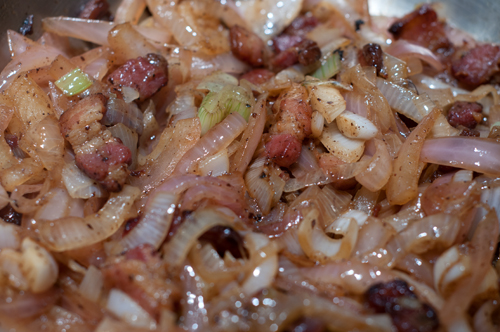 I used my pancetta cured bacon in the recipe and you can use pancetta or bacon – both work great. First cook the bacon down until it’s kind of a tender crisp, not all the way cooked to crumbly, about 10 minutes. Drain off enough fat before adding your onions so that 2-3 tablespoons of the bacon fat remains in the pan. And cook your onions over medium heat until they are wilted down and partially caramelized, like the photo above. That will take about 15 minutes. 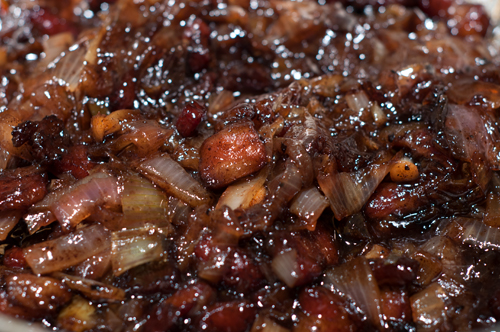 Then, simply simmer with the remaining ingredients for about 45 minutes, until you have something that looks glazed like this. Let it cool a few minutes so you don’t burn yourself, then pulse it in a food processor until the jam is the consistency of a chunky spread (not all the way smooth). 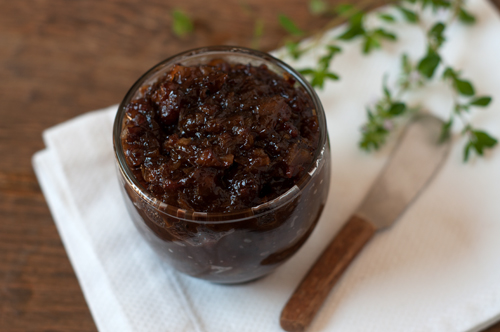 Spread on hamburger buns like I plan to do to elevate a simple burger to something special. Or use this as a condiment with cheese and crackers. If you’re here in the US, Happy 4th of July!