I’ve had lentils sitting on my counter for a week, trying to get inspired to create a lentil dish using up some of my green tomatoes, but alas, mother nature has once again astonished me. All of my green tomatoes – yes I mean all 30 pounds of them – have slowly ripened to red on my counter over the last couple of weeks. Let that be a tip to all of you – while many recommend carefully wrapping the tomatoes in single layers in newspaper and storing in a cool, dark place to get them to ripen, I kinda like the easy method of just staring at them each day and eating the ones that look ready! 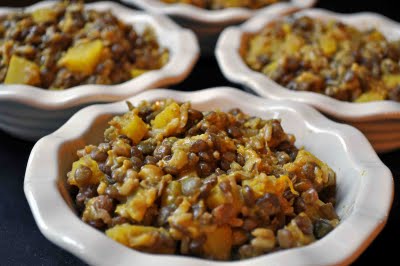 So I put my lentils to use making an easy vegetarian casserole that can serve as either a side dish or a meatless entree. (You actually can even make this vegan by omitting the cheese.) Lentils are packed with stuff that’s good for you, they store forever in your pantry, and they cook quickly. What more can you ask for from a humble legume?! 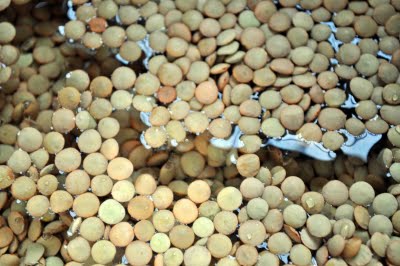 You’ll need to cook the lentils first – and for this recipe I included some brown rice which I attempted to cook together in the same pot as the lentils. Not really a good idea, as they require different cooking times and amounts of water. If you want to have rice in your dish, cook it separately then combine the two when you add everything else. I cooked my lentils in plain water figuring I was adding a ton of flavors later so didn’t need to put seasoning in the water, but you can also flavor the cooking water if you’d like. 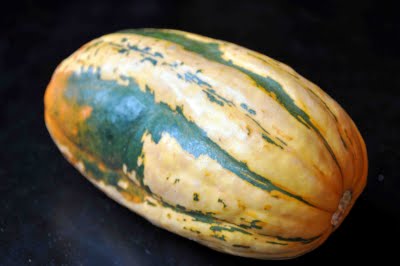 This is a sugar loaf squash, which is in the delicata squash family. They are tiny (this one is about 6-8 inches long) and although they are in the winter squash family, their skin is rumored to be not as tough as butternut squash, so they don’t last quite as long on the counter. 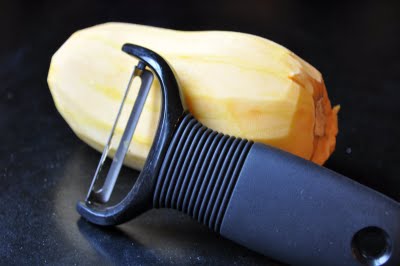 The easiest way to peel this is with a Y-shaped vegetable peeler, working from top to bottom in long single strokes. Delicata squash have some ridges so you’ll need to go deep enough to get rid of all of the skin. 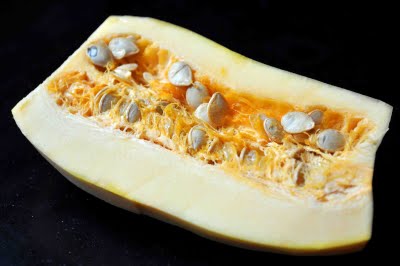 Next cut it in half lengthwise to reveal the seeds… 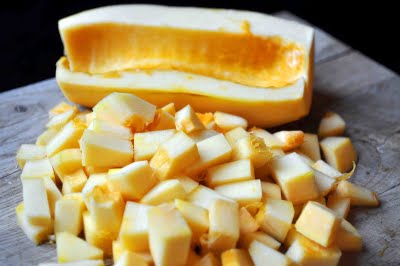 …then scoop out those seeds and dice it small. There’s another tip – I like food to be similarly sized in dishes. Since the lentils are tiny, you don’t want huge chunks of squash. Simply steam the squash in the microwave with a tiny bit of water until just barely soft, which takes 3-4 minutes. 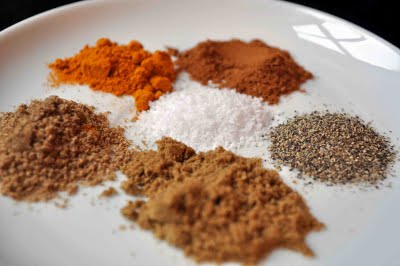 Then you’re ready to combine everything. Put the lentils, rice and squash into a bowl and add spices – cumin, coriander, turmeric, cinnamon, salt and pepper. I love that photo…you can almost smell the spices just looking at it! 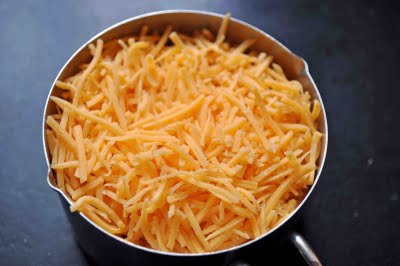 After pouring in the spices, add some olive oil and grated cheddar cheese and stir it together. Since everything is cooked and the hot lentils and squash melt the cheese as you stir it in, you can really eat this right away. 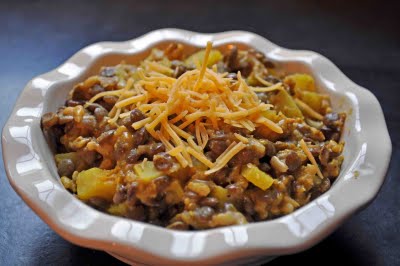 Or if you like, top it with more cheese and bake it in the oven at 350 degrees for 20-30 minutes. That’s what I’m doing with this for dinner tonight, accompanied by a lamb meatloaf you’re going to want to hear about tomorrow!

Cook lentils and brown rice in simmering water until soft, then drain any excess water. While lentils are cooking, place squash in a covered dish with a little water and steam until soft, about 3-4 minutes; drain. Combine lentils, rice, squash and all remaining ingredients and stir gently together. Can be either served immediately or baked. To bake, place in a large casserole and if desired top with a little more shredded cheese. Bake uncovered for 30 minutes.