Last year I started taking friends (and strangers who became friends) on culinary tours to Italy. The trip last year was to Rome and then to The Awaiting Table in the Apulia region of Italy. That’s all the way south in the “heel” of Italy, close to the Adriatic Sea. Americans call it Puglia – why do we do rename every European city to an English version? Is it really easier to say Rome than Roma, Puglia and Apulia, Milan than Milano? This drives me nuts! Lecce, in Apulia, happens to be one of the very best preserved baroque cities in the world, and Silvestro Silvestori runs a very authentic cookery program there that includes tons of interaction with the locals of the town. I thought it was so good that I’m taking another group of seven clients there in April. 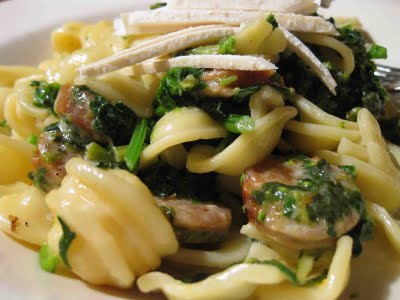 Because Italy was unified until 1861, the cuisine remains largely regionalized still – that’s a good thing, because as you go to each region in Italy you get to experience totally different things. The most famous pasta dish in Apulia is le orecchiette con le cime di rape, and Il Fornaio featured their version of orecchiette with broccoli rabe and sausage last night.Â Il Fornaio features about six regional Italian specialty menus each year, and starting tomorrow they will feature foods and wines of Apulia. If you’re going with me in April, stop in to get a preview of the orecchiette pasta, the burrata appetizer (I think the most perfect cheese ever!) and some Primitivo wine. If you’re not going, you’ll wish you were!