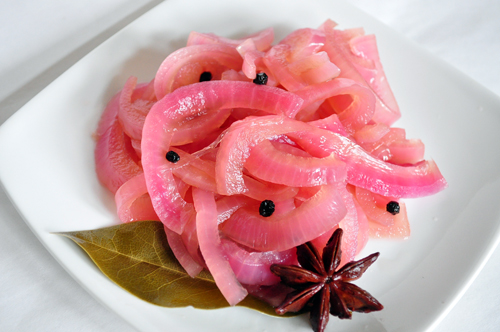 I gotta tell you, I’m just tickled pink about these pickled pink onions. This may sound like a weird recipe to post, but ever since I last had them with the fish tacos at the Pioneer restaurant near my house, I’ve been meaning to make them at home. Lest you think this is some elaborate Little House on the Prairie type of canning project, rest assured, I wouldn’t take you there! 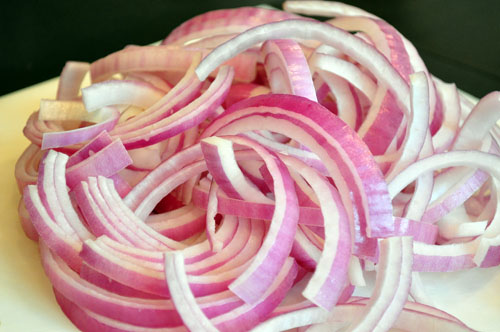 Instead, this is a quick pickle, and it starts with thinly sliced red onions. You can pickle white onions as well, but it’s that red coloring that gets leached out and gives them that lovely pink hue. I sliced mine into half moons, but you can also slice them into rings. 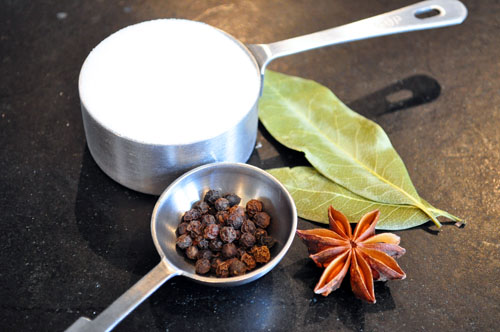 Put the onions into a non-reactive (important) stainless steel pot and cover with vinegar and pickling spices. I’ll credit David Liebowitz with the suggestion of star anise and I think it adds a nice subtle background flavor. If you don’t have that, you can omit or use a cinnamon stick or some allspice. I also used cider vinegar instead of white vinegar, a couple of bay leaves, and some peppercorns. Cover, bring to a boil, reduce heat and simmer for 30 minutes. 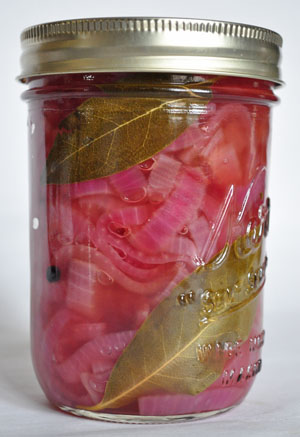 Let the onions cool then store in a covered jar in the refrigerator, making sure to pack the onions in the pickling liquid to preserve them. I’ve read they will last weeks, so I intend to enjoy them on sandwiches, pork chops, scrambled eggs, fish tacos and more!

Pickled Pink Onions
Yields a little more than a pint, or about 6 servings

Combine all ingredients in a non-reactive stainless steel pot. Cover, bring to a boil, reduce heat and simmer for 30 minutes. Let cool then pack into a clean glass jar, cover and store in the refrigerator for up to 3 weeks.