I’ve been on an egg kick lately – I simply crave the farm fresh eggs I get from Monroe Farms plus I’m experimenting with getting more protein in my morning diet. As a result, I’ve tried just about every pan I own to cook eggs, and none have worked all that well. Until this morning. 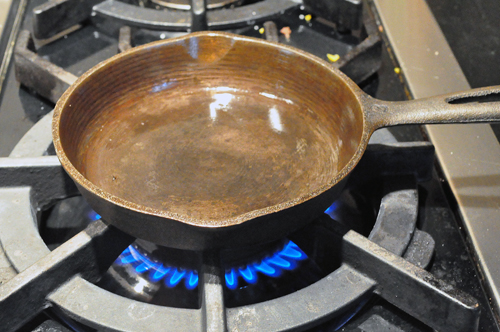 When I moved my parents recently, I cleared out a bunch of their kitchen equipment and cookware since they now eat primarily in the dining room of their complex. I gave most of the stuff away – to my sister who needed a mixer, my daughter who will take just about any cookware offered to her, to my son who just wanted a decent pot, to friends who were looking for one special item, and finally, the remainder to charity.

I didn’t keep much for myself – if moving elderly parents teaches you anything, it’s to make do with less, pare down now so your kids don’t have to do it later. But I did keep this small cast iron skillet, partially because it’s just so darn cute, partially because it had been my grandfather’s. It was covered in rust when I retrieved it, but with some simple steel wool work and a new seasoning with oil, it was back to working condition. I put it away, and promptly forgot about it. Until this morning. 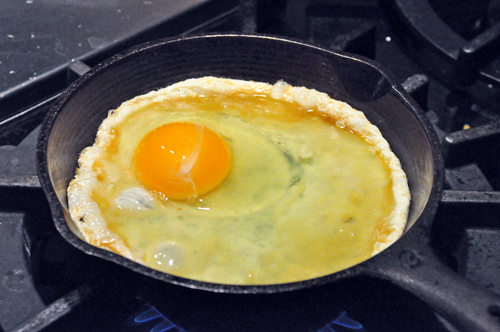 I’ve recently seen people talking about these ceramic coated skillets, raving about their cooking capabilities. But one cook mentioned they are not great for frying. So what’s the point of a skillet that’s not great for frying an egg? Somehow that dilemma reminded me of my tiny little cast iron skillet, so out it came to cook an egg for me this morning. 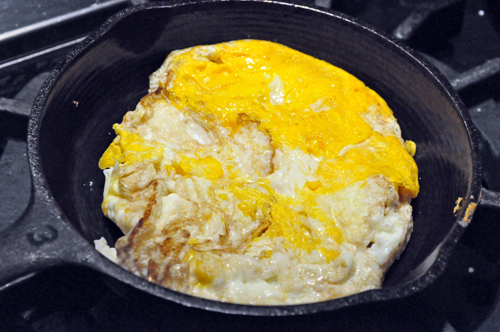 It heats up surprisingly fast for as dense as it is. I’ve gotten hooked on this bizarre semi-fried egg that I make with extra whites. I crack one whole egg along with one or two extra whites into a mug, then pour that into the hot pan that I’ve melted just a tad of butter in. When the whites are nearly cooked, I crack the yolk, and sort of flip the egg around to semi-cook the yolk. It’s my version of an over-hard egg, but you don’t have to be so careful flipping it over. 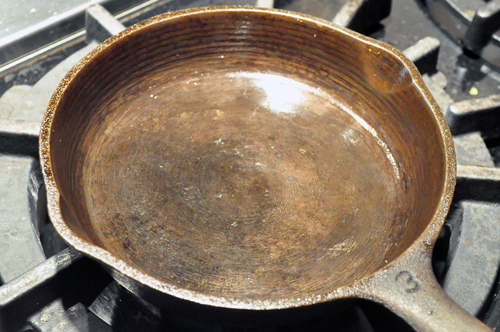 Even the whites didn’t stick a tiny bit in the pan. And will you look at the “dirty” pan after I slid the egg out? Not a speck of food remains. I think I’ll follow the old approach of never washing the pan, just wiping it out, to preserve the seasoning and nonstick properties. Thanks for the pan, Papa – I’ll think of you every time I use it.