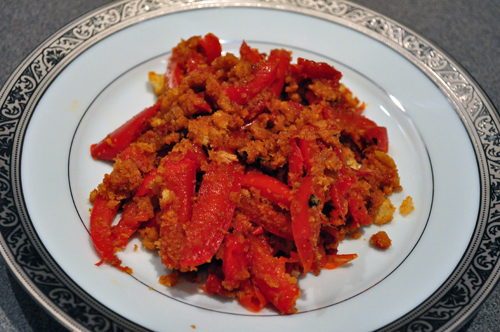 Although I’ve been to cooking school in Italy on more than one occasion and have made this dish at least 3 or 4 times, every time I try it at home, I’m not sure I did it right. I think the Italians use more olive oil – as in LOTS more. The first time I made this back home, I realized you have to really toast the breadcrumbs and add them at the last minute to keep them somewhat crunchy. One thing I know for sure is that this is a low and slow cook, similar to caramelizing onions or mushrooms. 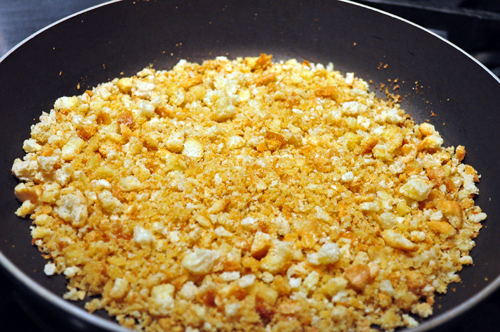 When I serve crostini at parties, I’m often left with extras. Because they have been baked with olive oil, I’m afraid they’ll go rancid if left out, so I crush them up into crumbs and freeze them. They happen to make the perfect crumb to use for this recipe. Cook some cloves of garlic in oil for a few minutes (I used the oil left from when I roast large batches of garlic cloves on the stove), then remove the garlic and cook the breadcrumbs in the oil for a few minutes until toasted but not burned. They are perfect to toss with the pepperonata. Serve the pepperonata with grilled meats or as part of a vegetarian feast – it’s really good, despite its simplicity.

I still have room to add people to my cooking trip to Italy this fall – why don’t you join me so we can figure out how to really get the pepperonata right?!