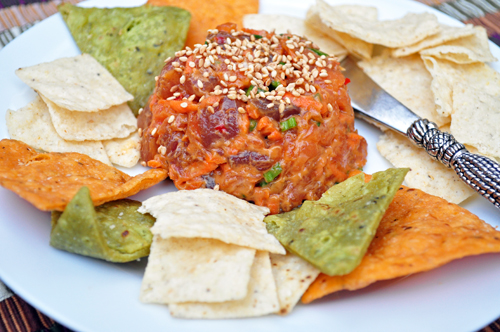 I kicked off my summer series of cooking lessons for kids – Cooking with Michele on Mondays, in partnership with The Kids Cook Monday – with a sushi class this week. 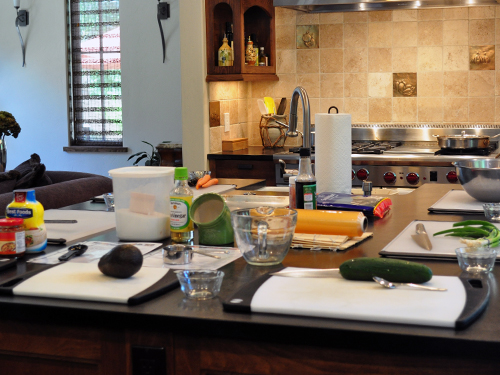 This is what the kitchen looks like before the kids get here – all orderly, clean and ready to cook. I can’t show you an “after” photo because I’m usually too exhausted to even lift up my camera after 2 hours of cooking with a dozen kids. The thing about my kids’ classes is that I don’t charge as much as adults, and therefore don’t make that much. So with sushi grade tuna going for $30 a pound, I want to make sure nothing is wasted. 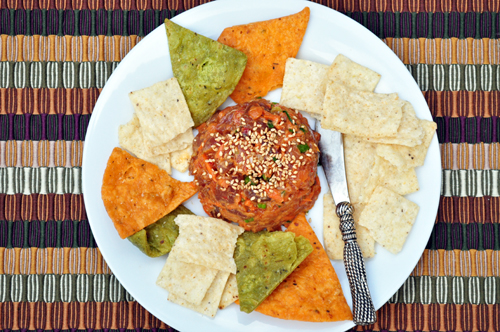 So as I was cleaning up, I noticed that I had a little assortment of fixin’s left: a small amount of tuna mixed with spicy tuna sauce from making Spicy Tuna Rolls, a few pieces of raw salmon, some grated carrots, one green onion, condiments like soy sauce, sesame oil, and sesame seeds. So I simply diced up the salmon and added it to the tuna mixture, along with the diced green onion, grated carrots, a little soy sauce, and a little sesame oil. I used a small timbale dish to mound it out onto my plate, topped it with sesame seeds, and served it with some chips. This, along with a nice glass of wine, made for a lovely cocktail hour on my back patio after a tiring day. But you don’t need to wait for sushi leftovers or for a tiring day – make this up any time for an appetizer, lunch, dinner or snack. Just make sure to always use sushi grade raw fish!