A Visit to Fruition Farm 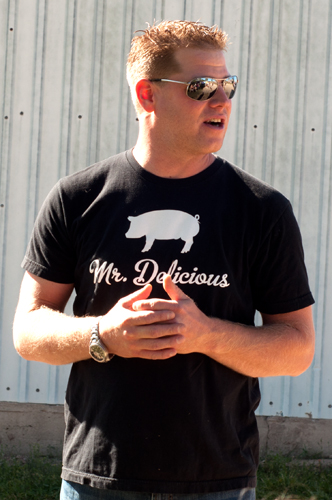 There is something intoxicating about listening to someone with a vision. And I’d challenge anyone who wouldn’t describe Alex Seidel, the chef and co-owner of Fruition Restaurant and Fruition Farm, a visionary. After his stint working for Frank Bonano at Mizuna, he launched the restaurant in 2007, and he’s achieved success for sure, being named one of Food & Wine’s top new chefs in 2010. But somewhere during the last 5 years, he became truly passionate about where his ingredients come from, although he jokes about the “farm to table” trend in dining right now. “Really, doesn’t all food come from a farm?” But he didn’t want just any farm, so he bought a 10-acre farm in Larkspur – and my, what he’s accomplished in a short time. He started by creating a coalition with his restaurant team – they all work a day a week at the farm, and were brought together for a “paint the barn” day to launch the farm. 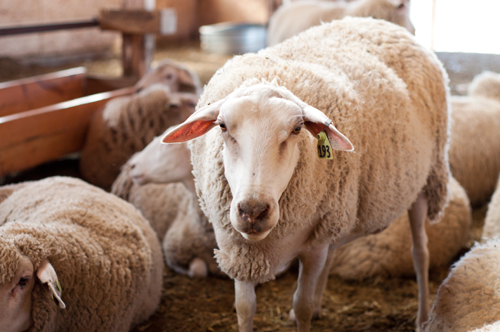 Our tour started with “the ladies”, as Alex calls them. “Colorado is the land of lamb. Go to any great restaurant across the country and they will be serving Colorado lamb,” he says. So he insisted on a sheep operation. His goal is to reach 100 ewes, a mix of East Friesian and Lacaune breeds. 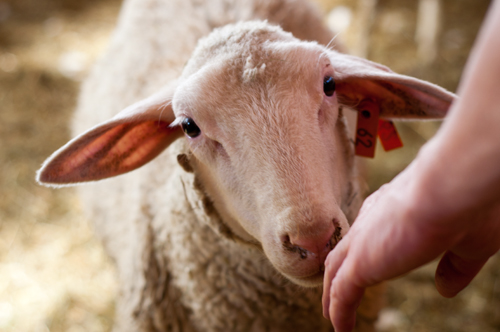 When the lambs are born, they nurse briefly to obtain the needed benefits of nursing, but then are hand bottle fed by the team. Eventually the male lambs are processed and sold to local restaurants – that’s where Alex’s contacts in the industry really give him a leg up over a traditional farmer – and the females are kept. After the lambs are born, the ewes are sent into dairy production, with milking at 6am and 6pm every day. But it hardly seems like work. 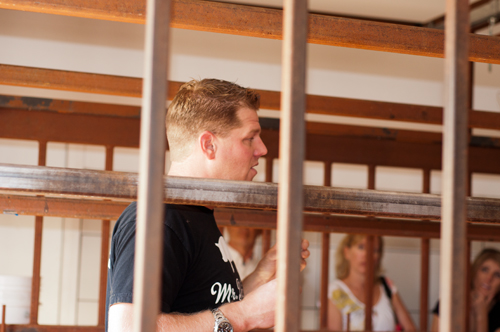 They eagerly climb the small ramp into the milking room that Alex and partner Jim Warren (the official shepherd of the operation) built, anxious for the treats they get while also gaining relief from an udder full of milk. They are raised on natural pastures, supplemented with alfalfa and a sweet feed that helps improve the taste of the milk they produce (and which they LOVE). When asked if they are certified organic, Alex drifts off to a discussion about our country’s issues with certifying organic, both cost and politics. He assures the group that his animals are raised naturally, but is quick to point out that occasionally they need antibiotics to keep them healthy. The operation is much more complex than you’d think, requiring a process thatÂ  mimics the suckling of a baby lamb, yet still, the whole flocked is milked in about 35-45 minutes. 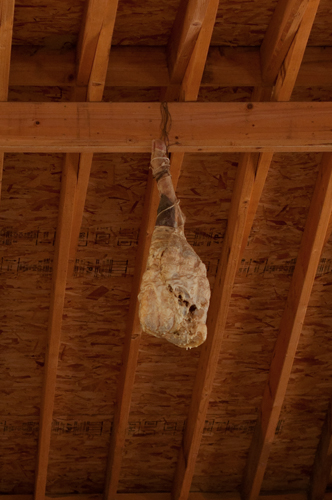 I was visiting the farm with Slow Food Denver, on precisely the one year anniversary of the operation. Although we started our tour in the barn with “the ladies” (and “Rambo”, the one male who evidently had a very busy day the previous day and couldn’t even be bothered to get up and greet us), there’s alot more going on here. Little things like this prosciutto hanging in the barn, an experiment that Alex hopes will lead him more broadly into the world of charcuterie. 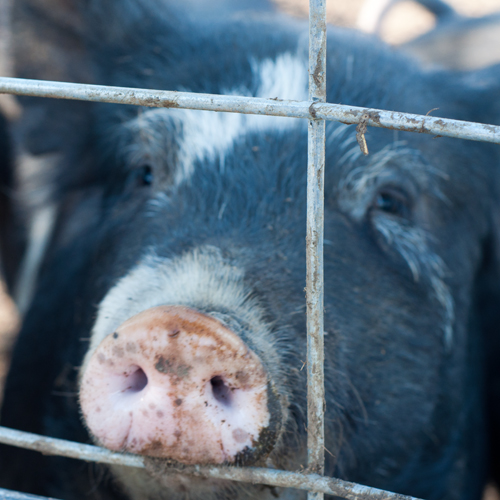 That came from the pigs he is raising, a few different varieties, but what caught my attention were the cute little heirloom breed Berkshires. 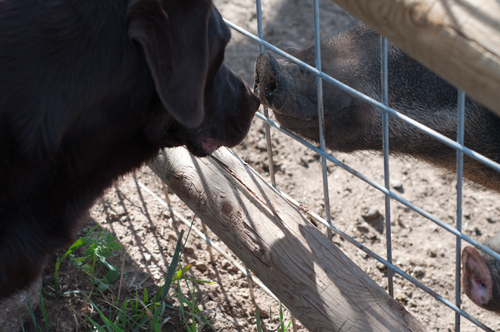 Evidently Reggie the lab, who never left Alex’s side on the 2 hour tour, is smitten also – that’s him kissing one of the pigs through the fence. There’s an interesting symbiotic relationship between the restaurant in Denver and the farm. Not only does the staff work at both places, but all of the food scraps are brought to the farm – some to feed the pigs (we learn they love egg whites and egg shells but not citrus), and some to add to the compost pile. 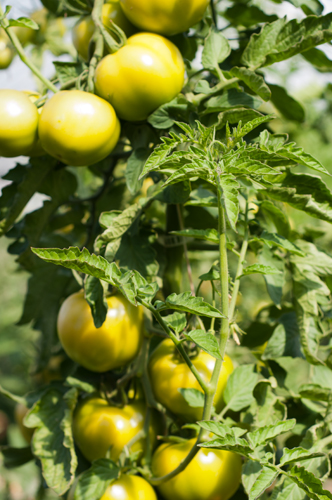 You won’t find pesticides and fertilizers here – they innovate with compost, and make use of things like oyster shells from the restaurant. The farm has even broadened their reach by developing a relationship with their coffee purveyor to use the husks from the coffee beans for bedding, and by taking tired produce from the produce guy to feed the pigs. They might move beyond just raising pigs into breeding them down the road – just another puzzle piece in Alex’s broad and creative vision. 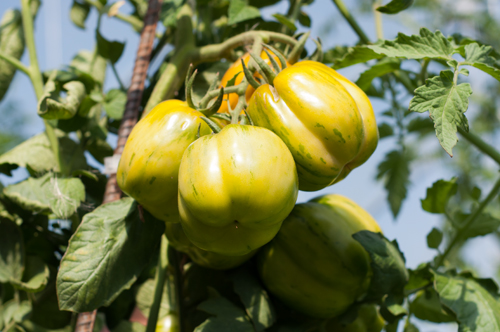 The produce in the hoop houses kind of blows my mind – tomatoes vined up 20 feet to the ceiling, with more tomatoes on one single plant than I got all summer in my garden. Those hoop houses are home to a wide variety of crops being grown by the farmer, Josh Halter, who moved his family here to run the farm. Potatoes, garlic, parsnips, peppers, greens, broccoli, cauliflower, onions – you name it, it seems like they have it growing. 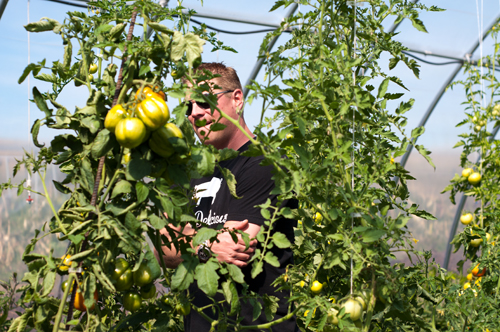 Some of the produce is used in the restaurant, some Josh sells to make a living. He’s learned all sorts of things about farming – that heat causes broccoli and cauliflower to bolt, and that the cold weather makes for sweet onions and beets. He’s also learned how to deal with the short growing season and high winds in this part of Colorado. 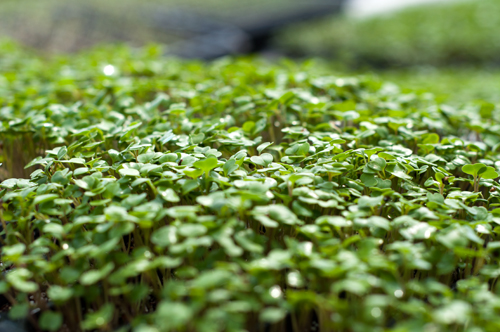 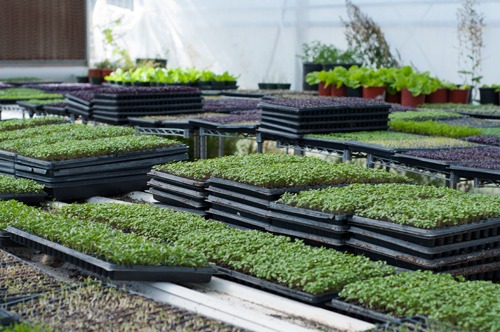 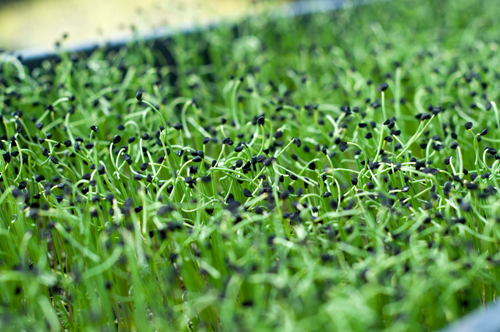 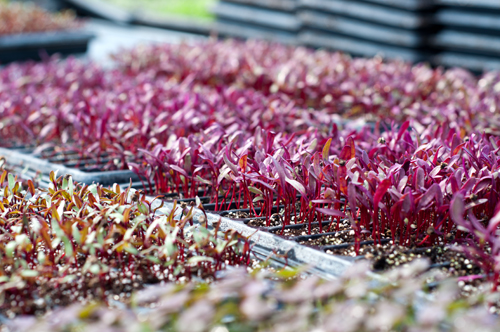 And then there are the microgreens in the other greenhouse. A vast array of them in tiny flats, lovingly raised, hand snipped, and sold at high cost to restaurants around town. Divine would be an understatement. As we nibble our way through the place, most of us were shocked to find how much each baby leaf tasted like the vegetable that plant would mature to produce. Just might have to get a grow light and try that myself this winter! 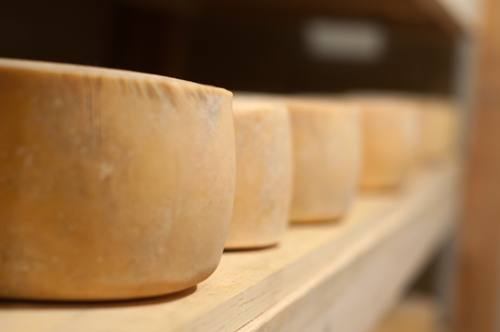 Perhaps the most fascinating thing about this entire operation is the cheese production. Making cheese is complicated, and requires an exact science. Things need to be processed on a specific schedule or the batch is ruined. Laws in our country are very strict about temperatures, aging times and more. The 50 gallon pasteurizing tank alone cost $20,000. There are cultures, and molds, and the other kind of molds, and rennet. 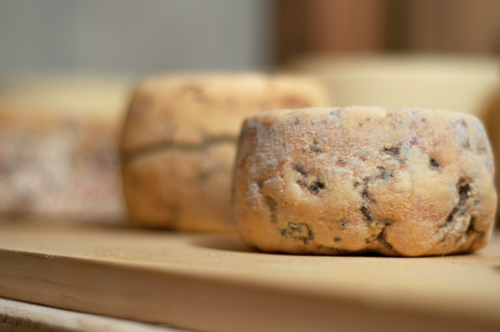 You need to understand flocculation and how to cut the curds – by hand in larger chunks for softer cheese, in smaller curds to lard aged cheeses. If you wait too long the cheese ends up dry and crumbly. And you’ve just wasted that precious sheep’s milk – a big price to pay when they produce less than a half gallon a day each. And did you know that sheep’s milk has a higher fat content at 8% and is naturally homogenized so it won’t separate? 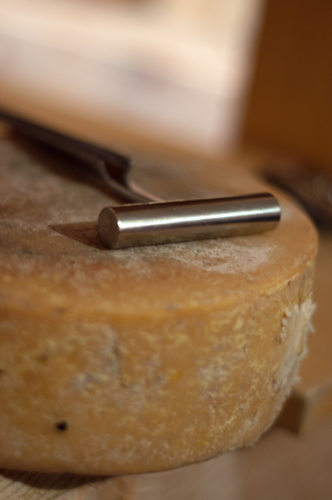 When the processing is done, it’s a waiting game on the aged cheeses. One wheel per shelf is for trying, and that cool little tool is used to pull out a piece about once a month, then the hole is sealed back up. When it seems ready, it’s for sale. While it’s still a fairly small operation, just recently the folks from the high end restaurant Eleven Madison Park in Manhattan came to visit and expressed how interested they are in Fruition’s products. 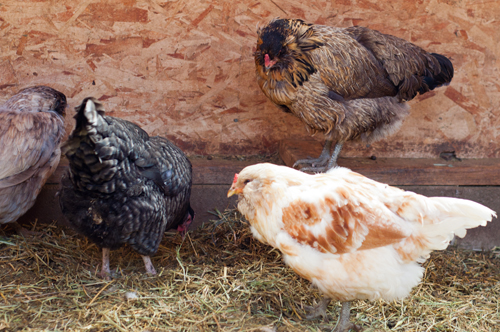 So you tell me, how does a young chef (he’s not 40 yet) in such a short time create such a unique business model? How does he – with no background at all in dairy farming or cheese making – help lead this team to a first place ribbon for their ricotta from the American Cheese Society? Vision, that’s how. And I’m sure a bunch of other qualities like creativity, eagerness to learn, willingness to try new things, a collaborative approach, and strong leadership skills. And did I mention he’s just a nice guy to be around? 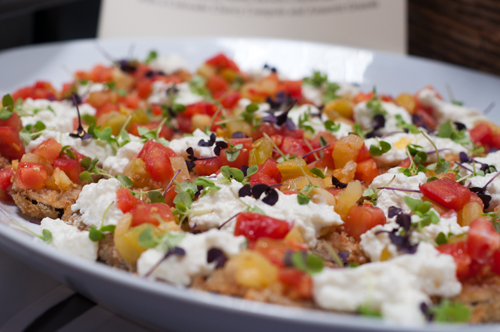 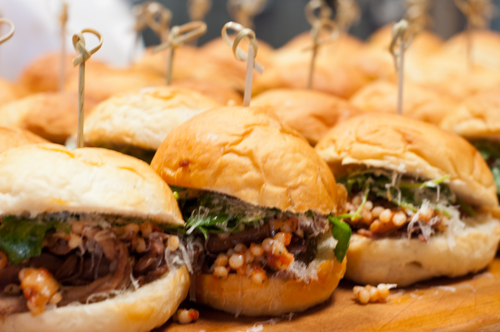 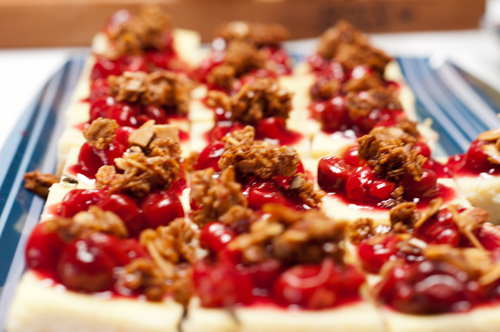 …and cheesecake made with Fruition Farm cheese and topped with cherries. Don’t pass up an opportunity to visit here if it presents itself to you. I could not have scripted a a better way to spend a warm fall day in Colorado!

In Denver, you can buy Fruition Farm cheese at The Truffle Cheese Shop.