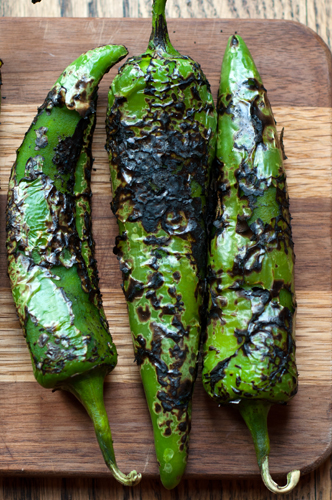 It’s hard to think about anything being blistering hot when it’s still winter and snow keeps reminding us that it’s still quite some time until spring. But blistering chiles? Now that’s another story entirely. 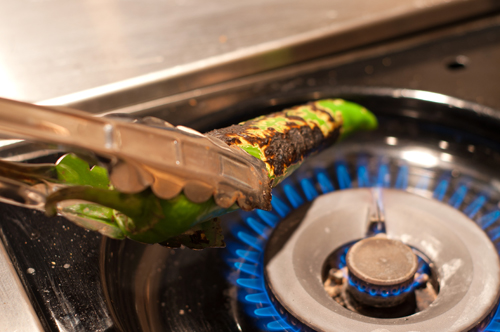 Most recipes that call for chile peppers want you to char the skin and remove it before using the supple flesh of the chile pepper itself in the recipe. If it’s a really thick skinned pepper such as a mild red pepper, you can char the skin easily under the broiler or on the grill. But in my experience, more thinned skin chiles such as poblanos and Anaheims lose too much volume in the process. The skin is simply too thin and you end up charring away the chile itself. A better technique for these thinner skinned chiles is to simply blister the skin, using tongs over an open gas flame on the stove. 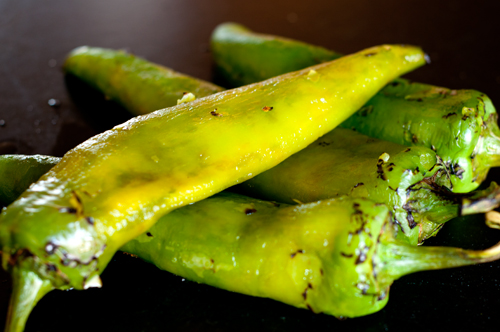 You’ll actually hear popping sounds and see the blisters, and as you continue to rotate it over the flame it will char all over like the first photo in this post. Pop all the charred chiles into a covered container to steam a bit and cool, then rinse under water to remove the blistered skin. If you have trouble getting all of the skin off, I’ve found that gently scraping the chile with a small serrated knife works wonders. 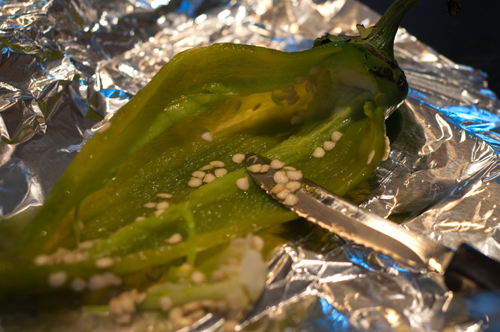 To make rellenos, you’ll need to carefully remove the seeds and ribs. First slice down the side of the chile – either a small incision if you want to have the relleno basically encased, or all the way down the side if you want to serve it more “open faced” style. When you cut out the seed pod, take care not to cut the stem off or to cut through the flesh of the chile. 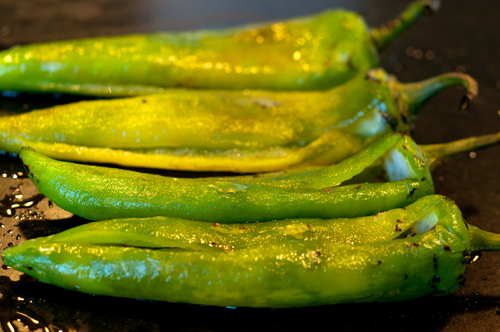 At this point you are ready to fill your rellenos. You could stuff them full of cheese and dip them in batter if you’d like. I am certain most of us agree that’s downright delicious. But if you’re looking for a healthier way to eat them, fill them with something other than cheese. A mix of diced vegetables, some black beans, crab or shrimp, avocado, shredded chicken or some combination of all of these. Perhaps throw just a little cheese into the filling if you like. 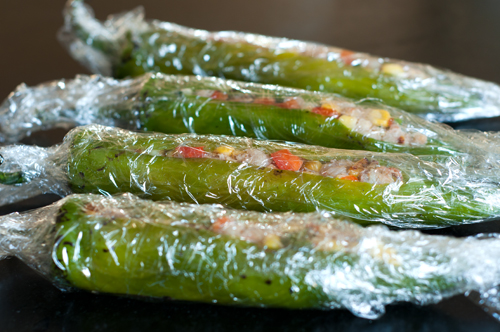 Then, instead of deep frying the rellenos, wrap each one up tightly in a couple of layers of plastic wrap, lay them into a steam basket, and steam them for about 10 minutes over some boiling water. Be careful when you unwrap them to serve as they’ll likely be hotter than you might imagine. Serve them up with any condiments of your choice. And if you come up with a killer filling, won’t you share it with the rest of us?