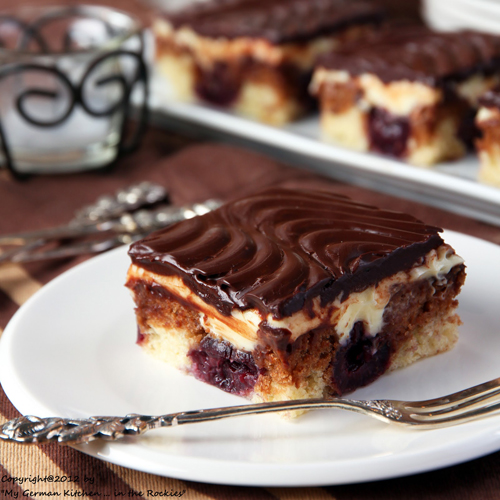 I’ve been wanting to feature a guest post from my friend and fellow Colorado food blogger Kirsten Hall for some time. She’s from Germany, and her baking skills are far superior to mine. She’s also a fun friend who is always generous with her time and ideas – she even helped me with some of the recipe testing and photography for my cookbook project. So while I continue sailing around the Windward Islands in the Caribbean, heeeeeere’s Kirsten!

Hello, helloooo! I’m Kirsten and I blog over at “My German Kitchen … in the Rockies”. Fabulous to meet you all. I can’t thank my local blogger friend Michele enough for letting me guest post for her today. She’s the best.

I would like to share a very traditional German Cake recipe with you – Donauwelle. Donauwelle would literally translate to Donau wave and maybe the cut cake could resemble waves. I don’t really see this and will leave it up to you. Unfortunately I couldn’t find any explanation regarding the origin of the cake’s name. Well, who cares anyway, the importance is the taste and let me tell you, it is outstanding, it’s especially a favorite with kids.

A Donauwelle is usually a sheet cake with several layers. The bottom layer is a black and white cake with cherries inserted. After the baking you spread the cake with a vanilla pudding butter layer and top it with chocolate. I even added some Nutella in my chocolate layer. Do I need to say anymore?

This recipe leads you through the steps to assemble it effortlessly in your own kitchen.

At any get-together where Germans bring cakes you are bound to find a Donauwelle. So, surprise your family with your new discovery, a German Donauwelle. 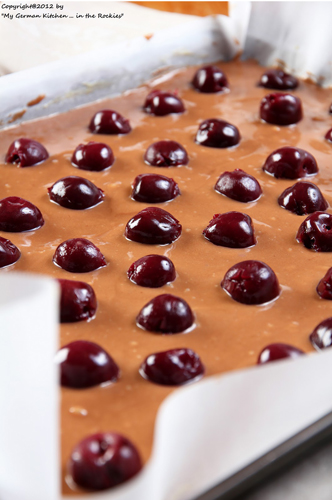 Isn’t she great! Thanks for the delicious recipe Kirsten!