When a Restaurant Has an Off Night 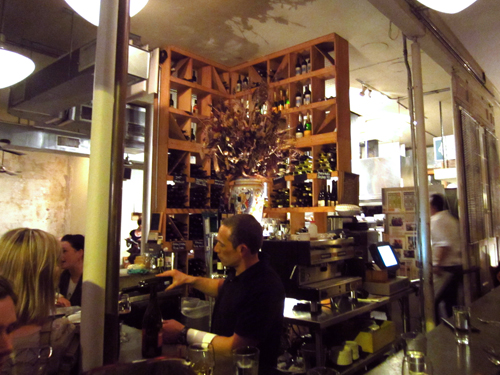 We’re all human. We all have off days. For most of us, that doesn’t mean we lose our jobs, our friends, or our family. It just means we had a bad day. But what does it mean to a restaurant when they have a bad day or an off night? And what happened recently when we dined at Potager in Denver? 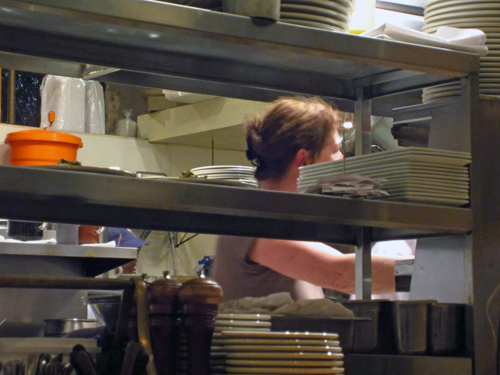 Here in Denver, I read that nearly 300 new restaurants opened last year. Included in that outrageously large number are outlets of chains – so a new Chipotle store counts as do higher end dining spots like Linger and Row14, both new in 2011. Regardless, with that many newcomers to the restaurant scene, for a restaurant like Potager to still be in business after 15 years is a credit to executive chef and owner Teri Ripetto (above). 5280 Magazine ranks them in the top 25 of all restaurants in Denver. The business is so brisk that they didn’t bother to participate in Denver Restaurant Week. In fact, that’s exactly why we chose to go there last night, thinking it wouldn’t be as crazy as places participating in the $52.80 meal for two deal. We were wrong. 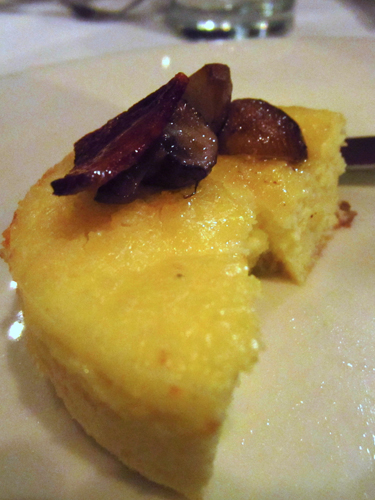 Potager doesn’t take reservations – we of course knew this before going, but were still surprised that the wait was over an hour. Waiting isn’t all that bad if there’s a nice place to do it, but Potager is so busy that the bar gets taken over by impatient diners who choose to eat there instead of wait for a table, so there isn’t a bar area to hang out. We actually went to a dive bar across the street and returned 45 minutes later rather than stand in the doorway for an hour. When we finally were seated, our waitress was delightfully cheerful, and took extra care to soothe my husband who gets cranky while waiting for food (and who assumes the answer to this for every restauranteur is to just expand their joint or open a second one). We ordered wine, settled in, and ordered an appetizer to share. The cheese souffle topped with mushrooms and fried salami was really smooth and delicious. So far so good. 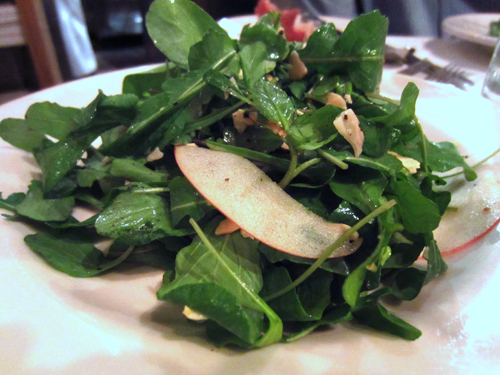 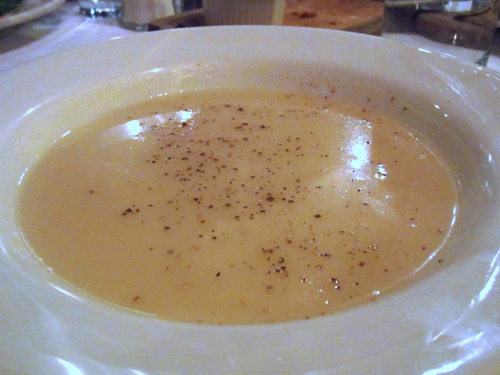 The menu at Potager isn’t huge – that’s fine with me, as I’m one of those people who would just happily eat whatever a good chef puts in front of me. Other people, like my husband, when finding that the only beef option is grass-fed (which for the life of me I can’t understand why he hates) are left feeling like they didn’t have that many options. There was only one salad on the menu – arugula – which fortunately he likes. And only one soup, a creamy potato and leek, which as it turned out was perfect for a windy cold evening. Both were good. 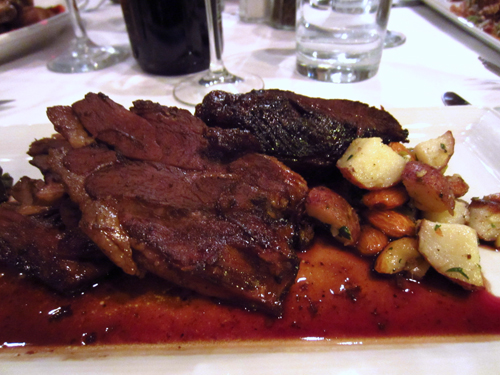 Then our entrees arrived. I had asked the server which she thought was best, and thus ordered the lamb shoulder. Good call on her part, and good call on my part to follow her suggestion. It was succulent and tender, served with a nice sauce and some potatoes. My friend had the duck breast – it was good, but not great. Tasty, but not that exciting. I guess the best way to describe it is not memorable, which isn’t good for a restaurant. They want all of their food to be memorable so you’ll go home, keep dreaming about it, recommend them to friends, and return again and again because you can’t get enough of it. My lamb was close to this, the duck wasn’t even close. 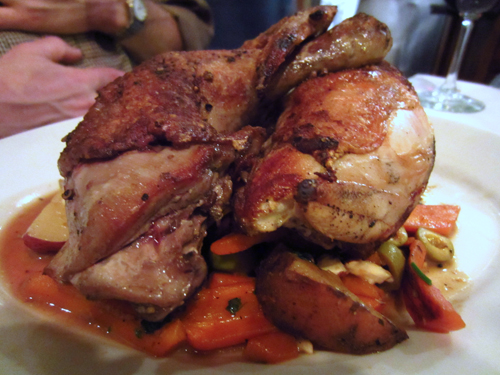 And then there was the roast chicken. I always tease my husband that he orders poorly and that’s why he doesn’t like his food. You know, ordering schnitzel in a sushi restaurant – how the heck is that going to be good? But in this case, I had recommended he order the half roast chicken, figuring it was simple comfort food that he would like. The menu advises you must give 25 minutes notice, so we were prepared for the wait. But when it arrived, both his and my friend’s husband’s clearly were undercooked. The thighs were running red juices and were bloody at the bone. It helps to be a cook, so I quickly advised the server of the issue and asked her to separate the thigh and leg portions for more cooking, but bring back the breasts (which were cooked through since the breast always cooks faster) so they could begin eating. She did, was very nice and apologetic about it, but the breasts were dry and fairly flavorless. I just made a roast chicken on Thursday night, and honestly mine was much better.

So just what does this experience mean? The server comped us a couple of desserts as an apology for the long wait and the mediocre chicken. Still, the two men were less than impressed at dining experience, and I know at least my husband won’t want to return. Is that fair or not? Clearly if 5280 has it listed in the Top 25, and if diner’s were lining up to wait an hour or more to eat through most of the evening, the food must be generally really good. Was it a fluke that the chicken just wasn’t up to par? And is that reason to write them off and move on to the long list of other spots we’re dying to try? Or should we cut them a break, return, and give them another chance? Like I said at the beginning, we’re all human. So why do we expect our chefs to walk on water every time they put food out of the kitchen?