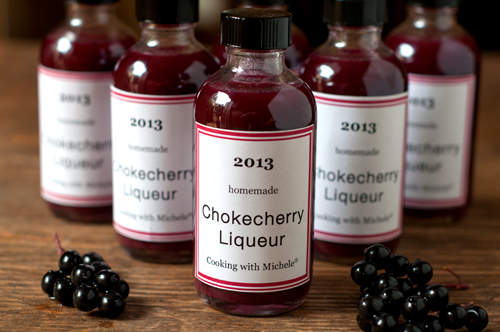 I’ve been watching my dogs and the squirrels at our house devour the chokecherries for years now, but for some reason was never compelled to pick them myself and do anything with them. Until last week, that is. I was having a Little House on the Prairie sort of weekend – I canned dill pickles, made Limoncello, and cured some bacon pancetta style – and for some reason I couldn’t stop there. 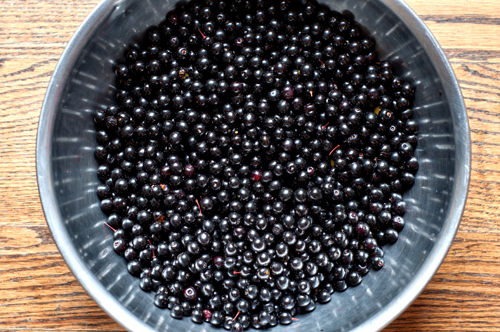 Chokecherries are easy to pick – either snip off the tiny bunches that droop down with some kitchen shears, or simply use your hand to sort of strip the berries right into a bowl. I harvested about 6 cups of berries in about 10 minutes – pretty easy work. 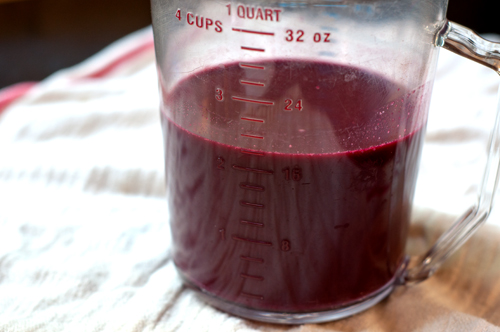 No matter what you are going to do with the chokecherries – chokecherry syrup, chokecherry-apple butter, chokecherry liqueur – it seems the first step is to make juice. Place them in a pot and just barely cover with water. Simmer for 15 minutes then mash them with a potato masher then press them through a fine mesh strainer to collect the juice. My 6 cups yielded 2 cups of juice – not bad! 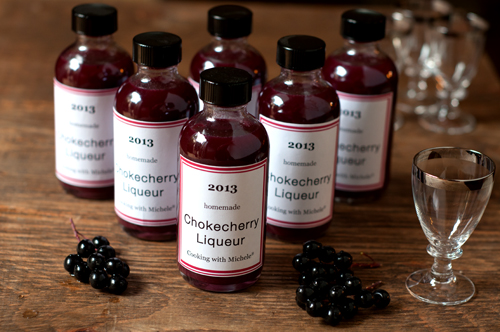 Making chokecherry liqueur is much like making limoncello – mix some sugar into the juice, mix with grain alcohol, and bottle. The mixture needs to sit for a month before serving – according to Milly Mathiason who won the 1990 Chokecherry Festival with this recipe. (I know, who knew that festival even existed, right?!) I put my bottles away to use as party favors for my New Year’s Eve dinner party. Won’t those look pretty on the table?