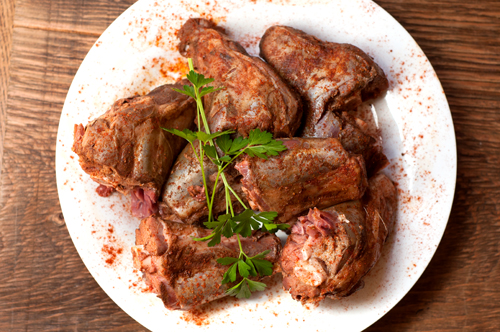 I’ve been going a little crazy with the sous vide around here, ever since the kind folks at Sous Vide Supreme sent me a machine earlier this month to test recipes and blog about. My first attempt, the Bison Rump Roast with Porcini Rub, was a touchdown, Peyton Manning style. Precise. Decisive. No hesitation. Called an audible with no prior training. But this recipe left me a little confused – sort of like watching one of those touchdowns when they throw the ball side to side to several guys before somebody inches across the line into the end zone and you aren’t 100% sure that his knee wasn’t down when he was touched by the defenseman on the 5 yard line. Yea, this is what my husband (and Payton Manning and the Broncos) have turned me into. One of those people who starts thinking of normal daily activities like cooking in sports analogies. 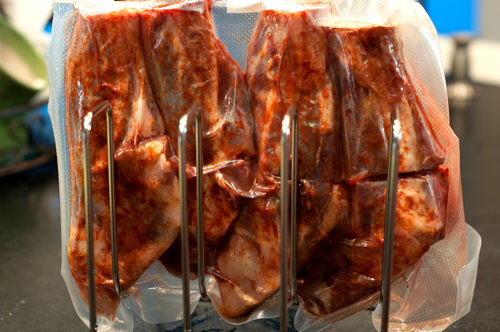 I seasoned the lamb shanks with the mergeuz seasoning I had leftover from making Lamb Merguez Sausage Sliders. Having not cooked lamb shanks yet in the sous vide machine (and not finding any recipes online for them), I cooked them initially for 14 hours (not even close), put them back until 18 hours (the top photo), and then put them back again until I called “uncle” at 24 hours. I cooked the meat at 135 for the first 14 hours and 140 for the remaining 10 hours. It still had a medium temperature to it, it tastes delicious, and once you cut the meat from the shanks, it’s tender to eat and not mushy like meat that’s been in a sous vide too long. The only thing is that the connective tissue really hadn’t broken down yet in that amount of time on the shanks (you can see that in the top photo), so it wasn’t “fall of the bone” like you expect from a lamb shank. I almost didn’t include the recipe here, but felt others using the sous vide technique might learn from this. I also concluded that the meat, cut into chunks, will be delicious in a flatbread wrap with some raita sauce, so I intend to eat it that way. If you try this recipe and cook them longer with different results, please let me know the outcome!