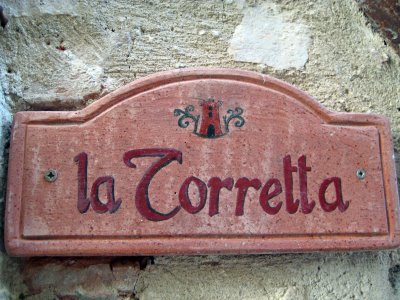 I slept in until 9:30 on our last day in Italy, but then was anxious to walk around and capture some photos of the town before leaving. 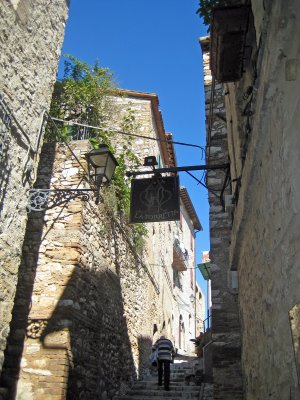 I especially like this view of Casperia from the back road that exits town – it really highlights the true beauty and ancient feel of the hill towns of Umbria and Tuscany. 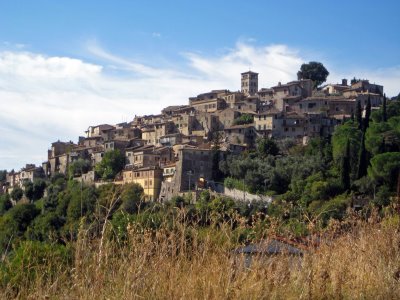 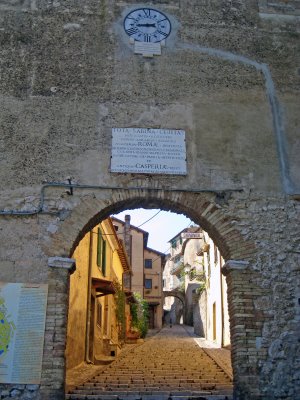 The arches on either end of the town lead to the shallow 175 steps from the larger “new” town below up to the door of La Torretta in the walled old town. 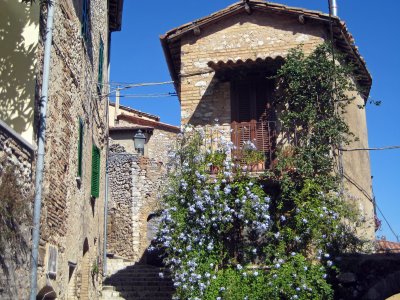 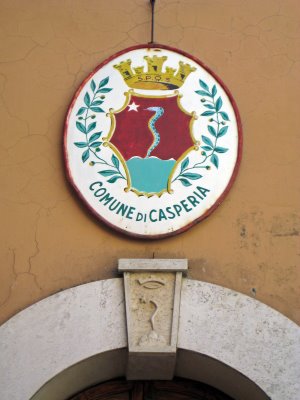 We met up with the Ungers and RC by Friend’s Cafe in the piazza and had a diet coke before grabbing Karen to head out to our planned Sunday lunch at Gusto al’ Borgo, a fairly new agritourismo and restaurant about 1/2 mile outside of town. 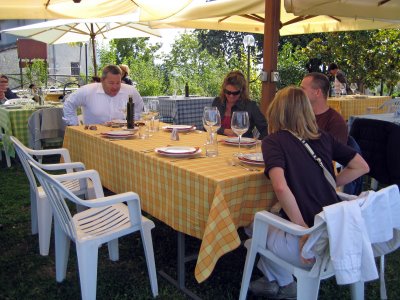 The restaurant had just a few tables like this one set up outside the small building that also hosts cooking classes, and we settled in for what we could tell was going to be a special day. 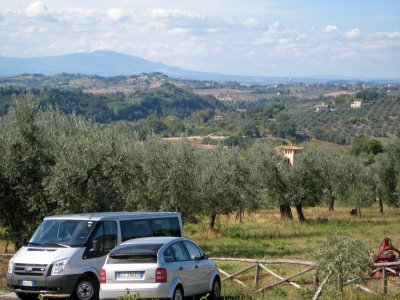 That’s “the toaster” (aka our van) in the background with the view from our table to the rolling Sabina countryside beyond. Could you pick a better view for a 3 hour lunch in the country? 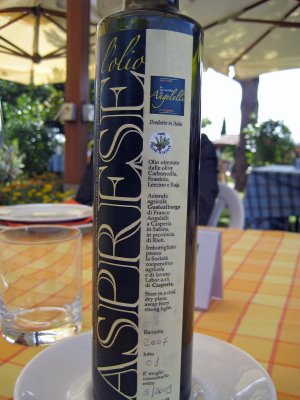 The proprietor of Gusto al’ Borgo explained that everything is grown locally, and he was especially proud of his olive oil which we all agreed was outstanding. 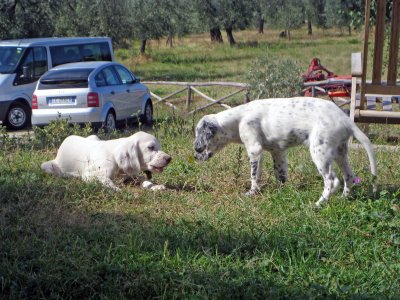 One of the best parts of the experience was watching the dalmatian puppies romp and play all around the tables while we ate. At one point there was a loud crash and all the puppies gathered to lick the ground – the site where the entire dish of grated Parmigiano Reggiano had fallen. Can you blame them?! 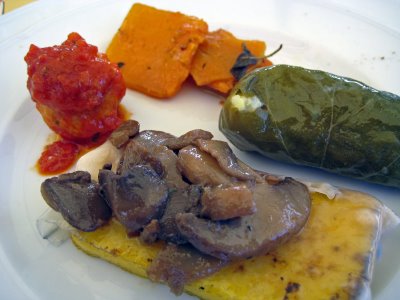 We began lunch with an antipasto of risotto in grape leaves, a gnocchi type dumpling with marinara sauce, spiced pumpkin, and polenta smothered with prosciutto and mushrooms. 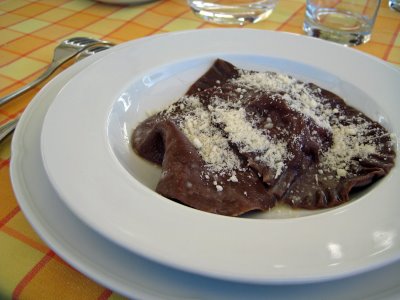 The pasta course started with ravioli stuffed with pumpkin and cheese… 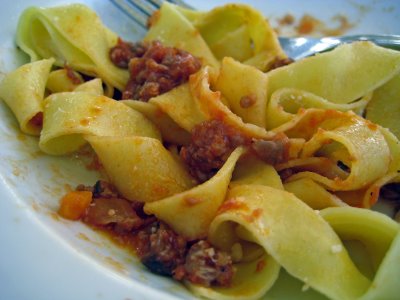 …which was then followed by papardelle with Bolognese sauce. You have to love any meal that offers not one, but TWO pasta courses. Pasta dishes in Italy are simple, not smothered in sauce, and so flavorful thanks to the use of local ingredients. 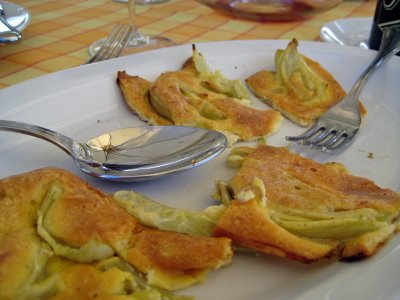 For the secondi, we were served these artichoke pancakes to accompany the short ribs of maiale (pork). 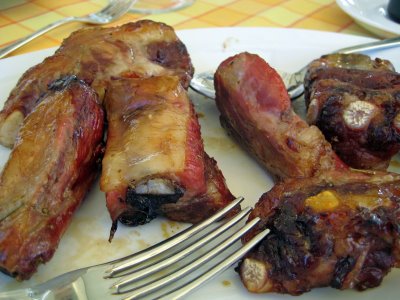 I actually lowered myself to gnawing on the bones because they were so delicious! 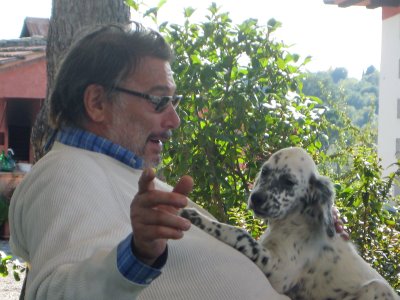 You can tell the owner loves his puppies, and we delighted in watching them (and petting and holding them!) throughout our meal. 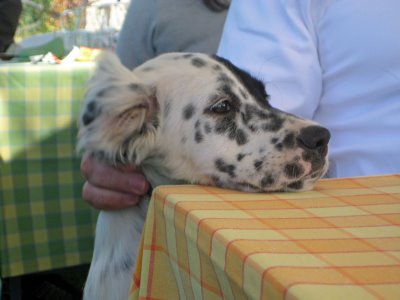 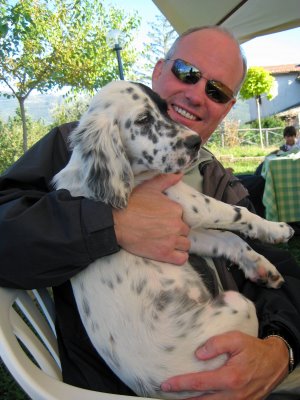 For dessert we managed to polish off the cannoli stuffed with ricotta and drizzled with chocolate, and throughout the meal we enjoyed the very good house made red wine. After sipping the owner’s house made plum grappa (again offered as a token of friendship), we waved the white flag of surrender, and headed back to La Torretta in the late afternoon, early enough for me to capture this incredible shot of the roof tiles. 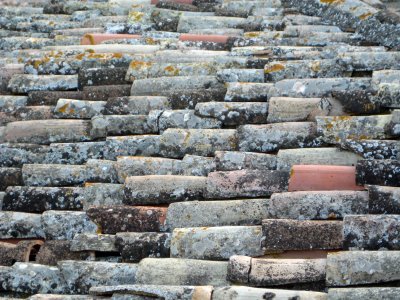 We had three hours to kill before our next planned activity, and that means either you sleep or keep going. I decided to side with Greg and RC and met them at the cafe for a prosecco before showering to wake myself up for the evening. 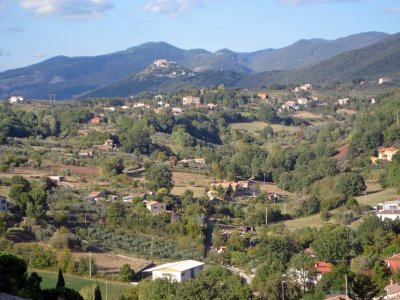 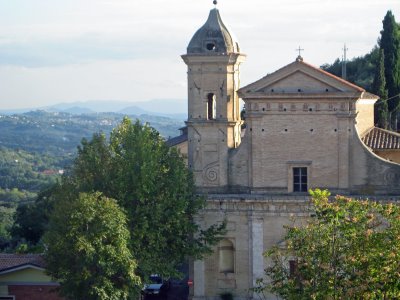 Maureen had arranged for us to have an olive oil and wine tasting evening with Johnny Madge, a displaced Brit who has lived in Italy for 25 or more years. He’s passionate about food, olive oil, and wine, and we joined some of Maureen’s other guests for our final evening with him. 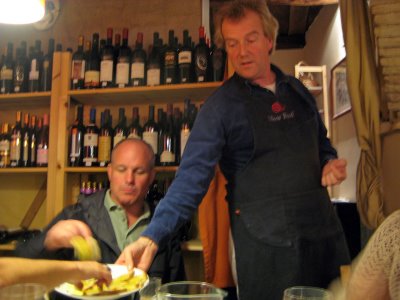 He took us through courses of local specialty foods like the fresh ricotta drizzled with olive oil (all right, drowning in it)… 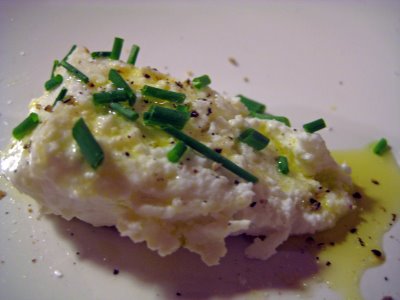 …bresaola swimming in olive oil, small spinach and ricotta stuffed bites, prosicutto, and more. It was a fun way to spend our last night and we were all a bit sad about the trip ending. 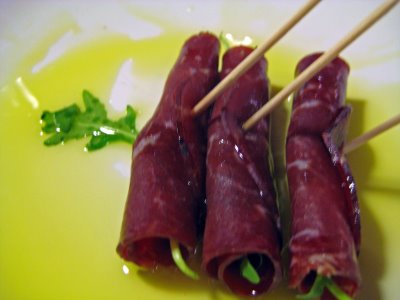 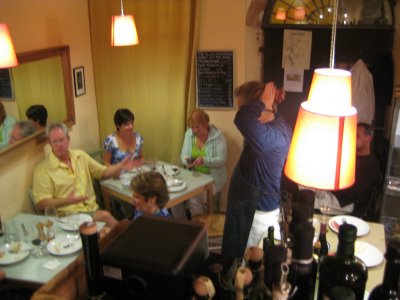 Back at La Torretta, we gathered in the sitting room for one last nightcap (ok actually a bottle of Prosecco) with the group before hitting the sack to get up for our early flight the next day.