Do you know how great it feels to be leaving town when the weather stinks? Nobody in Denver was that thrilled about the spring blizzard (except the farmers who needed the moisture), and we were all grins heading to the train station to begin our adventure. We’ve never done train travel in the US before and our friends had heard how gorgeous the scenery was along the route of the California Zephyr from Denver to San Francisco, so we set out, boarding for an 8am departure. 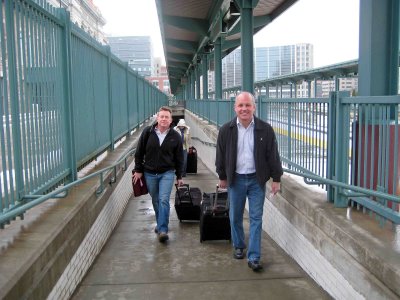 After numerous discussions with Amtrack we had picked the sleeper car accommodations, and selected the family sleeper which actually spans the full width of the car in the back of each car. So each couple had a family sleeper room to ourselves. 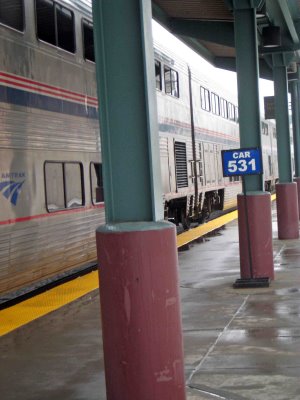 As soon as we boarded, we headed up to the observation car, which is great because it has windows all the way around and over the top, with chairs that turn for easier socializing or playing cards. Those are our friends Sharon & Tim below, all ready for the sights and to win some money playing cards. 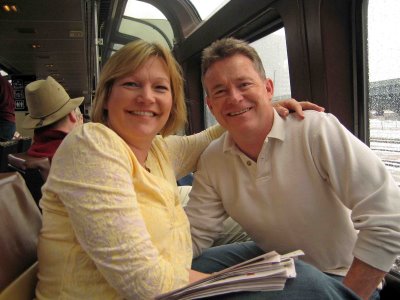 We chugged out of the station and made it as far as Golden when we stopped in order to let the crews work on some of the ice on the switches. I had had this conversation with my friend before boarding – what do trains do with 2 feet of snow on the tracks? She was convinced they just plow through it, but I guess the ice on the switches is a real problem so we were happy to let them clear it before trying to pass. 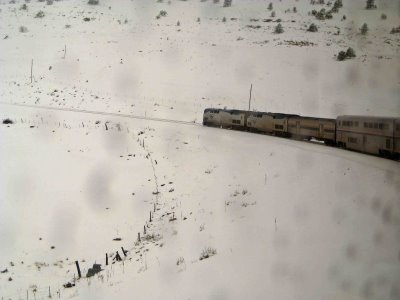 No better time for reading the paper or a snooze, since we were sitting in this position for a good hour. 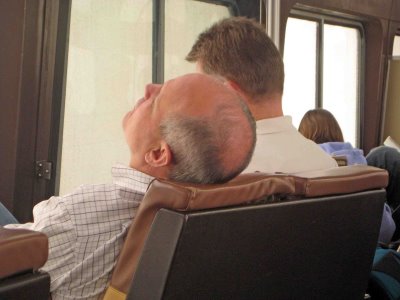 Dining on the train is a bit different. The dining car calls open dining for those passengers in the sleeping cars (I didn’t realize ahead of time that if you were in coach in addition to having no place to sleep you might not get a meal either). Passengers file in and as soon as it’s filled, they start taking a list for other diners. Eventually they call last call to get on the list, and then you wait to be called to dine. Thankfully the food was edible, if not great. I was famished – the prior 10 days of packing and moving my parents had taken its toll on me – and I dug into a spinach and cheese omelet with bacon, hash browns, and a biscuit. 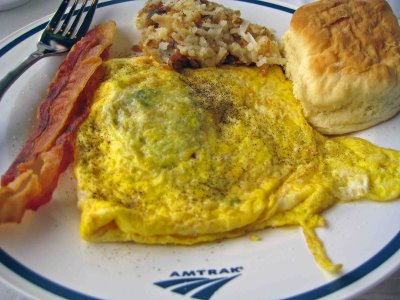 We slowly started creeping along the tracks through the storm, and made it about to Genesee. If you’re not from Colorado and you’re reading this, that’s only 45 minutes by car, but we had already spent two to three hours on the train. This is when we learned the most important thing there is to know about train travel: it’s not like a car or plane. They don’t cancel. They don’t turn back. They just sit there until they can keep moving forward, regardless of how long that takes. 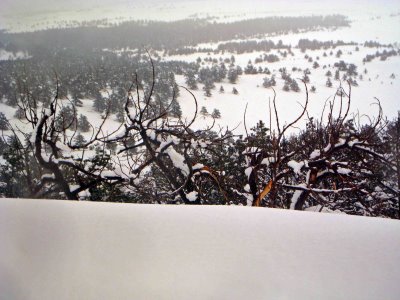 We lingered in the dining car, playing Hangman on the paper tablecloth to pass the time before figuring out we had to abandon our dining car seats so they could prepare for lunch service. 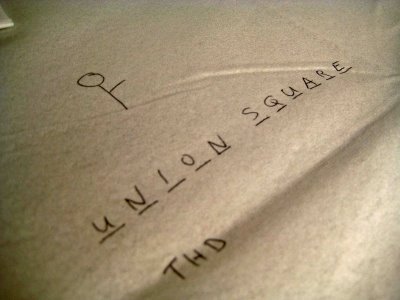 Does it seem from this blog post that we just went from breakfast to lunch? Well, that’s a bit what it felt like sitting in the blizzard on the train in Genesee without anything to do but eat. I’m not sure I can even recall what this was – some sort of chicken and gravy stew with rice) but by the time I finished it I was kind of in a food coma. 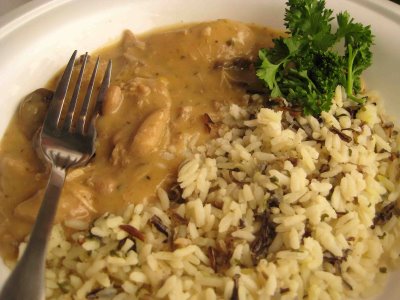 Thankfully, that sleeper car was calling me and I was able to read some magazines and rest a bit, because there certainly wasn’t a thing to be seen out the windows. 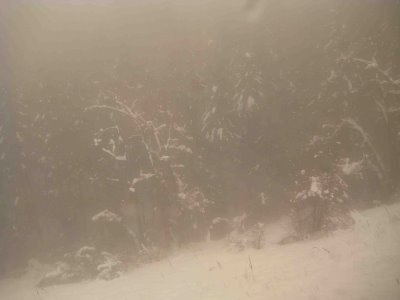 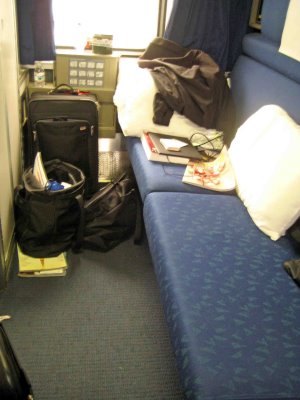 You might be wondering at this point how long we sat in this winter wonderland. Ten and a half hours would be the answer. While we were able to capture a few pretty photos like this one… 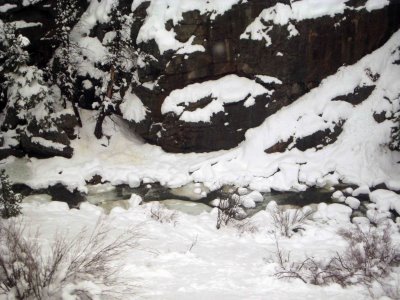 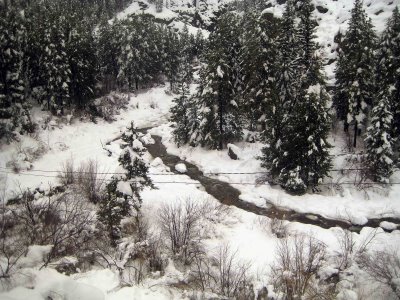 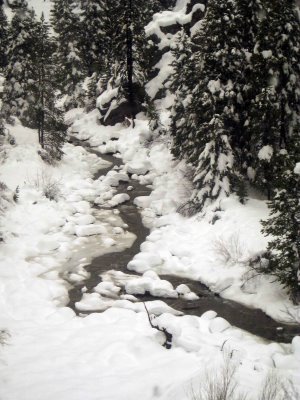 …basically that’s all we saw all day long as we literally inched our way through the snow. Although we were beginning to worry about getting to our final destination, our worries paled compared to the passengers aboard who were only trying to get to Winter Park to ski. They were dressed in their ski attire with boots on – not appealing for ten hours. One guy actually asked the conductor if he could get off, hike up the hill, and hitchhike – he got a simple “NO” in response. 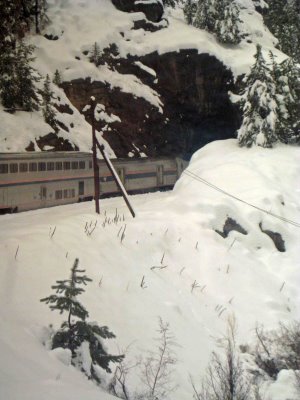 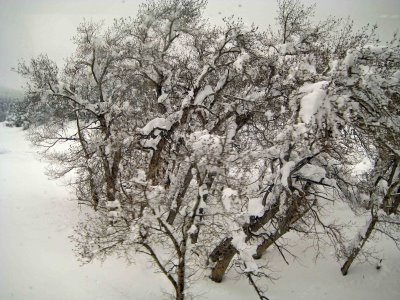 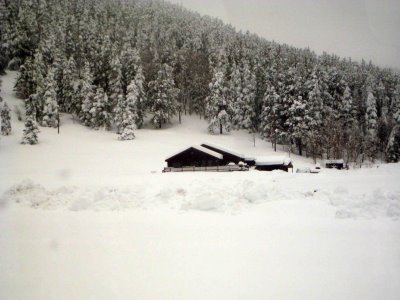 …and the sun finally began to break through the clouds. Unfortunately, it was so late in the day that it quickly turned to dark, meaning we missed any CO mountain scenery. (Remember, that’s the whole reason to take the train to begin with.) 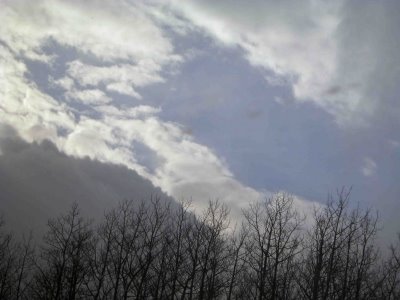 Don’t ask me what wheat nuts are – I tried these and they are disgusting. But our friends love them. Or is he just delirious from being captive for a full day without really going more than 90 minutes from Denver? 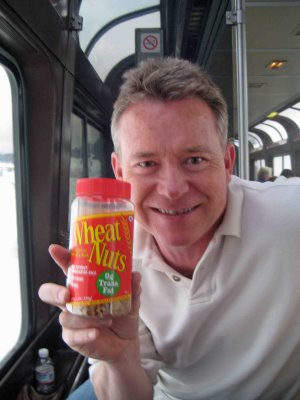 As it turned dark, we settled into the dining car for yet another meal – most of us had roast chicken which was edible but not photograph-able – and then we retired to our sleeping cars. And then spent the next 8 hours trying to sleep aboard a bumpy and noisy train. Not at all what we envisioned but we we’re hoping for the best tomorrow!