Wow, this week has gotten away from me – spent a day with my good friend at chemo and a day with my mom at the doctor, which left less time for cooking than I’d like. I did manage, however, to complete the third place chili recipe from the Leyden Street Chili Cook-off that I judged this summer, and this one is really different than most chili recipes I’ve seen. 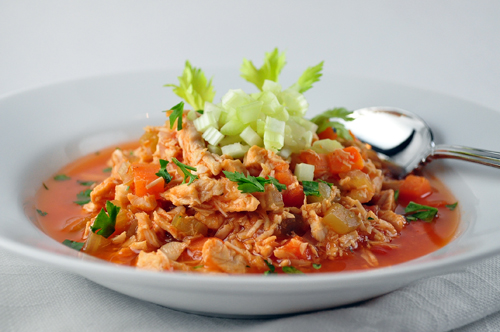 Buff Chick Chili was presented by Julie Michalek, and I think what wowed the judges the most was the uniqueness of the dish. If you like the flavor of buffalo wings, you’ll love this chili, as it mirrors all of those flavors. What’s more, it was probably the easiest of all of the chili recipes to make. I actually don’t like buffalo wings because of the slimy texture of the skin and the amount of bones and things you need to gnaw through to get a bite of meat. Julie’s chili removes all of that work and presents the same great buffalo wing taste. 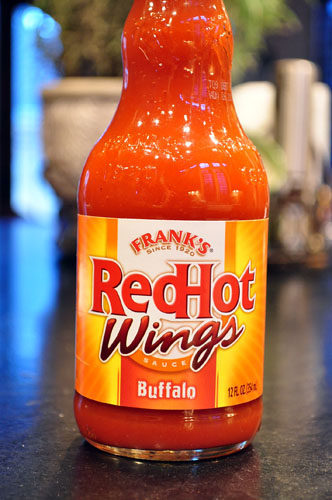 The most important ingredient in the chili has to be the wing sauce – it’s the predominant flavor. I didn’t photograph all of the steps because they were really so straightforward. Cook the chicken in a crock pot, shred it, combine with diced veggies and sauces,Â cook until ready. Julie serves this with tortilla chips that she tops with blue cheese and puts under the broiler just briefly and had I had either ingredient in the house you can bet I would have done that! You can also top with some diced celery as I have and maybe a sprinkling of blue cheese, a dollop of blue cheese dressing, or a bit of sour cream. 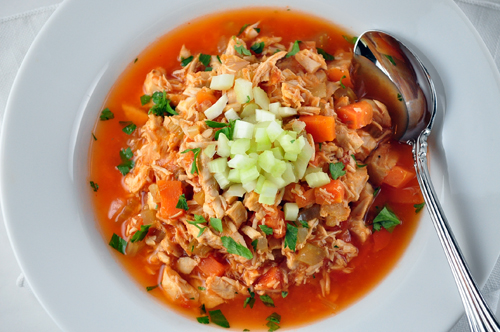 Place chicken breasts in a Crockpot with 1 can chicken stock and 2 cups water. Cook on high until the chicken is cooked. Let chicken cool, then shred. Discard cooking liquid. Mix shredded chicken and 1/2 cup of the hot sauce in a pan lightly browning it for 5 minutes. Return chicken to the Crockpot and add carrots, onion, celery remaining hot sauce, chicken stock, and tomato sauce. Season with salt and pepper and cook on high for another 3-4 hours.

Serve with blue cheese tortilla chips: Preheat broiler and spread tortilla chips out on a baking sheet. Top with crumbled blue cheese and place under broiler for 2-3 minutes. Watch carefully as they burn easily.

Note: For whatever reason I don’t own a Crockpot! I poached the chicken breasts until cooked through, then let them cool and shredded them before continuing with the rest of the recipe on the stovetop, letting the chili simmer for a few hours. I did find that my technique produced a more runny chili, so recommend you follow Julie’s Crockpot method if you have one.