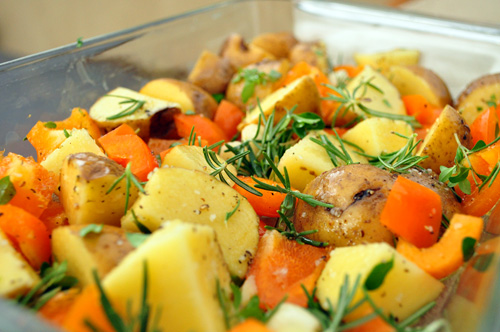 You’re probably reading this wondering just what I mean by inserting the word “summer” in front of roasted potatoes. I know that I often talk about roasting vegetables in the fall and winter, when it’s NOT 90 degrees outside. But roasting in the summer has one distinct advantage – the proliferation of fresh herbs from my garden can be used to elevate the dish without spending $4 on a small and slightly moldy plastic package of herbs from the local grocery store.

This is more of a technique than a recipe, so I’ll keep it short. Toss some cubed potatoes of choice (I had a few Yukon Gold ones remaining from my farm winter share) with whatever else you want (I used a diced orange pepper and some pungent cloves of garlic). Throw in copious amounts of fresh herbs (I like the rosemary and thyme combo best, but you can use sage, parsley or tarragon if you like), drizzle the whole thing liberally with extra virgin olive oil, season well with sea salt and freshly cracked black pepper, then roast at 400 degrees for about 30 minutes until everything looks nicely cooked and golden brown. I served this with a pan seared pork chop that I had gotten from my CSA farm. Oh alright, I’ll confess:Â  I ate almost two whole chops they were so darned tasty!