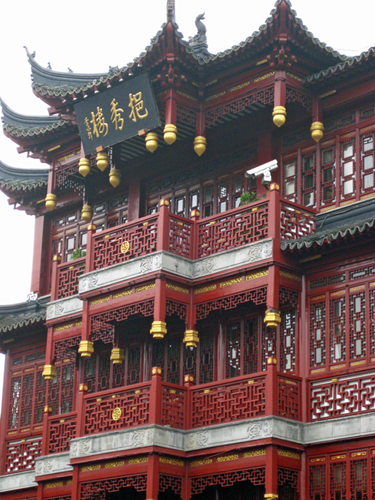 Now this is what I thought China would look like. Yes, intellectually I knew that the country has been advancing and growing, but still. I just wasn’t prepared for all of the polluted, bland high rise cities filled with millions of relocated Chinese that I had been seeing all over the country for the past week or so. I expected to see more “old China”, sporting this architecture. 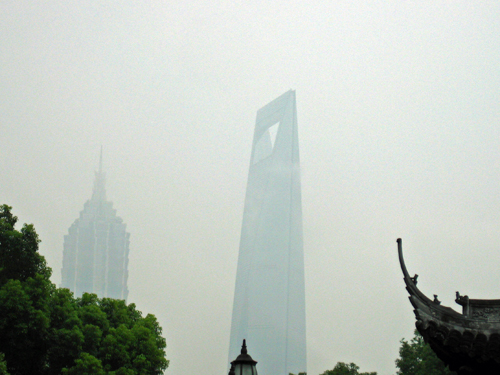 Yes, if you look up and behind those curled up rooftops (they were made that way to keep water from running down on people who passed by and because they look like they are smiling), you see the two icon skyscrapers on Pudong just behind. 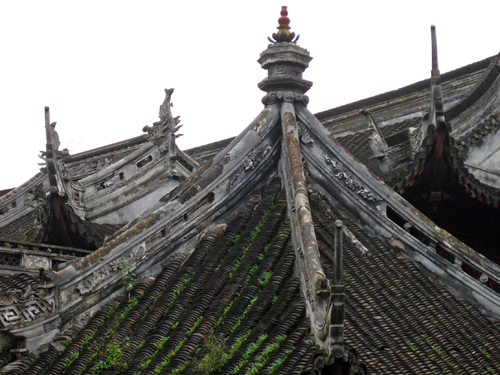 But for an hour or so we didn’t look up or out, but instead, we got a closeup look at the Yuyuan Gardens, one of the best old Chinese gardens around. 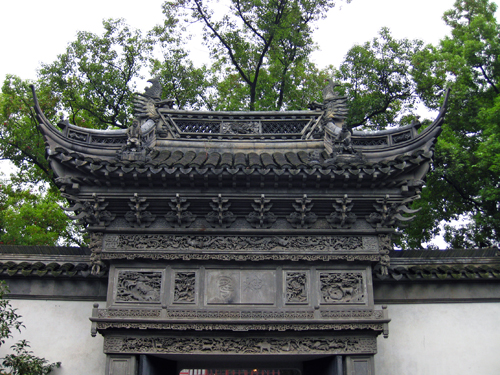 Our guide said it was built as a 60th birthday present for some guy’s mother, but online I found something that said the garden was first established in 1559 as a private garden created by Pan Yunduan, who spent almost 20 years building a garden to please his father Pan En, a high-ranking official in the Ming Dynasty, during his father’s old age. 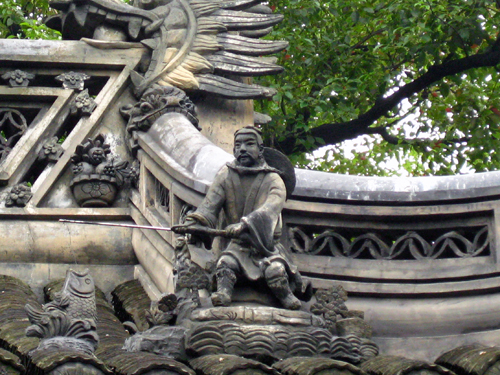 Yet another site says it was built simply to please his parents in their old age. 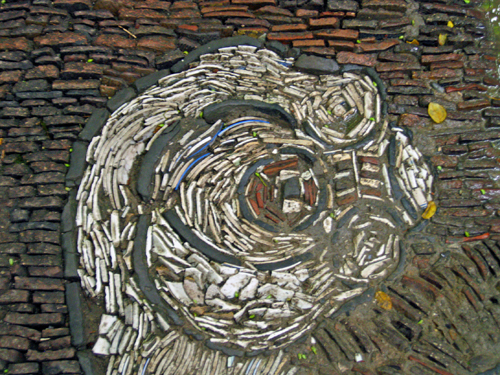 Whatever the true story is, it’s clear that this gorgeous setting was created to be pleasing (yu in Chinese) and that it was created to honor parents during the Ming dynasty. The floors are a combination of intricate stone mosaics like this one and other flat cut granite and marble and stone. 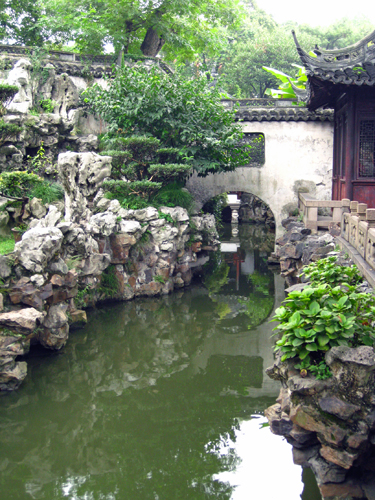 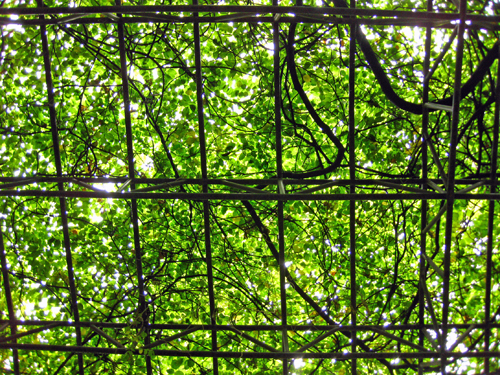 As you wander through the paths you pass by ponds and under arbors on your way to yet another secret corner of the garden. 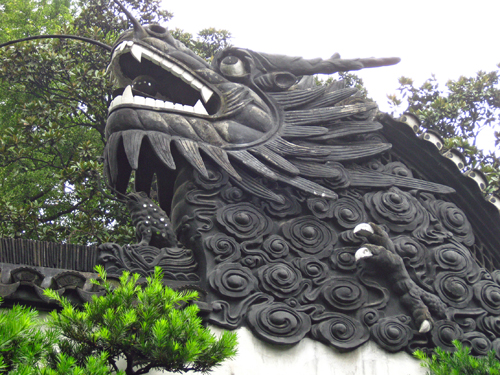 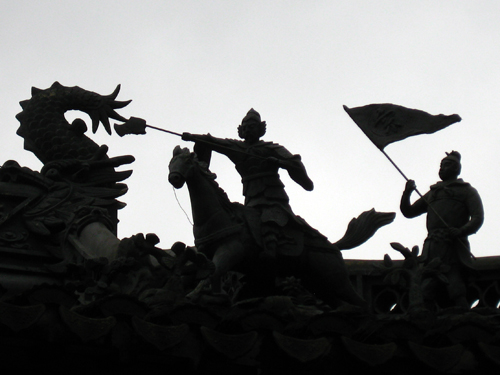 Pausing to look up you’ll find ornamental decorations on just about every rooftop, some quite elaborate scenes, others simple animal figures. 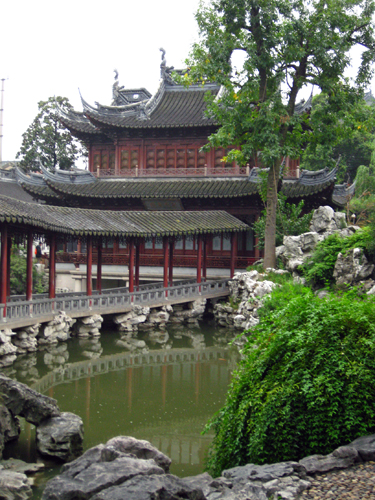 Don’t be misled by the name garden – the entire area includes numerous buildings that were used to greet and entertain people including a complete performance stage housed in one structure. 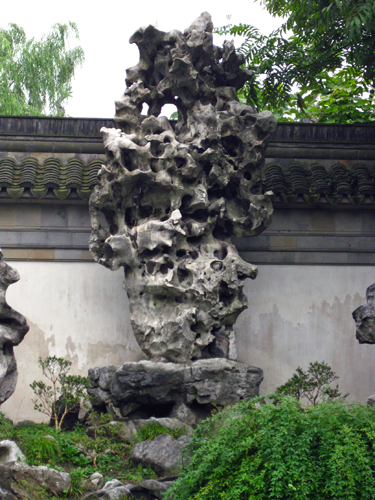 And throughout the gardens you see this rock used extensively. It’s pulled from lakes, and thus is worn by water creating interesting holes and crevices. This large one at the front of the gardens is considered to be the most exquisite rock of this type in China, and it was rumored to have been pilfered more that once before it ended up here. 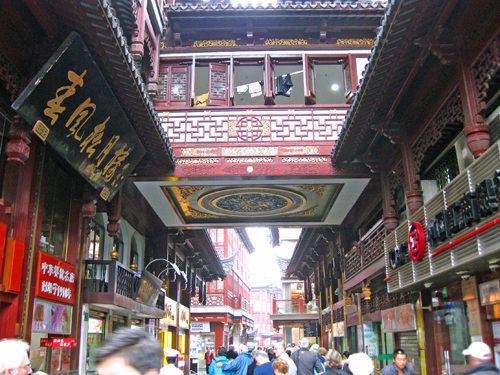 Outside of the gardens and covering several blocks is the Yuyuan Bazaar which borders Old Shanghai Street. 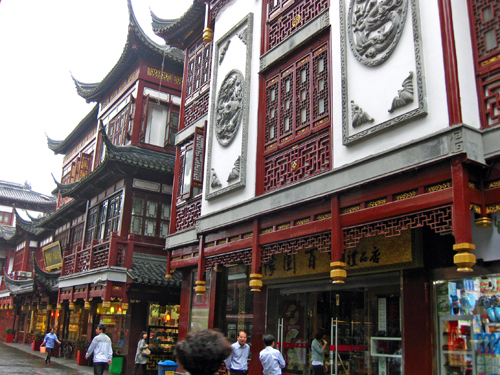 It’s the place to haggle for everything – from jade buddhas to pearls, from silk bags to tea sets. And haggle is right – you start at 10% of the listed price and argue back and forth (I can only imagine what they are calling me in Chinese) until you settle on a price, usually about a third of asking price. In the process, if you try to walk away don’t be surprised if the vendor grabs your arm to hold you there, continually yelling “hello!” and “cheapelel!“, which I’m guessing is cheaper, but cheaper than what? Our group dispersed quickly for shopping as soon as we were let loose here, knowing this was our last day in China to buy gifts to bring home to friends and family. 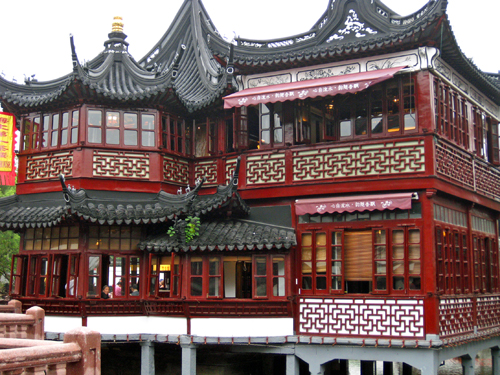 This area is also home to food and drink, including everything from the oldest tea house in the area… 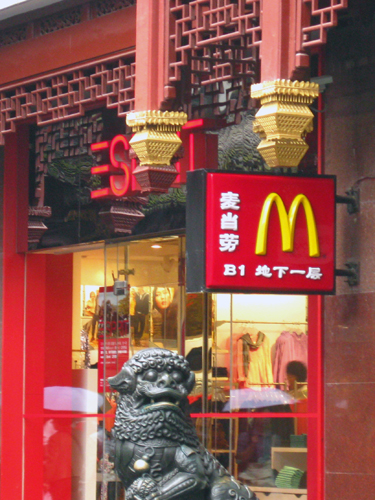 …to McDonald’s guarded by the ever present lion out front. It depresses me to see McDonald’s in foreign countries, especially when our guide explained that Chinese grandmothers love to take their kids here and that seeing them eat french fries is a symbol that they are affluent. Backwards, right? 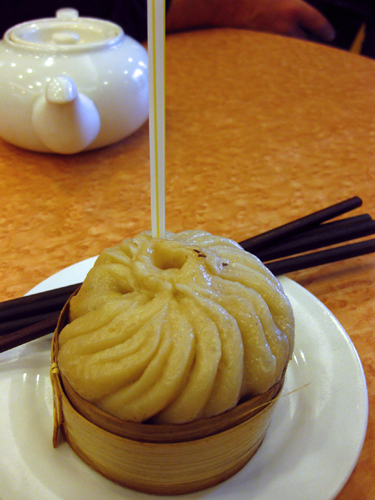 Being the consummate foodie that I am, my first stop before shopping was to get one of the soup dumplings I had read so much about. This big dumpling is filled with a rich broth that you sip out of the straw, making Starbucks coffee (which is right next door and on every corner in Chinese cities) feel lukewarm compared to the scorching heat of the soup. I had a small sip or two, then pried it open a bit to reveal the soup contents, which were indiscernible and could have been anything ground up and mixed with a broth. It was also intensely fatty, coating my mouth with a greasy feeling as I took a sip. I decided to leave it uneaten, not wanting to risk food poisoning for the flight home, but happy I at least had the chance to see what all the fuss is about.