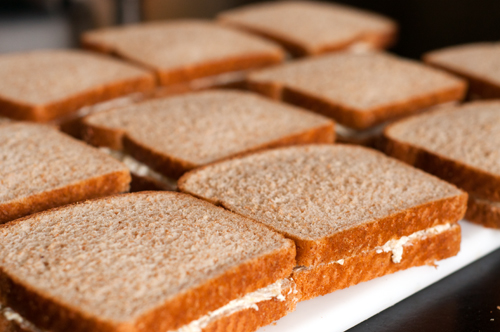 Have you wondered where I’ve been for the past week or two? Well, December is the busiest time of year for my catering business and I’ve had 5 major events in just 10 days – two cooking dinner parties, two large cocktail parties (one for 50 and one for 90), and a plated dinner party for 22. Yes, my back and feet hurt. Yes, my new knee is fatigued. But the good news is I have some yummy recipes to share this week that just might make their way into your holiday entertaining plans. 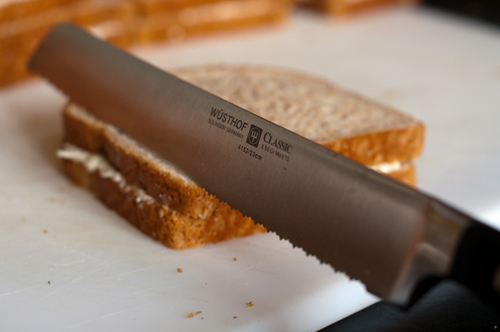 The dinner party I did was for 22 women who have held a themed cookie exchange for the past 30 years, if you can believe it. This year the theme was the Queen’s Jubilee, so they requested tea sandwiches for the passed appetizers. These are simple to make, even in a large portion like I did for the party, but you need a great bread knife to make a clean cut when removing the crusts. WÃ¼sthof was kind enough to send me their Classic Double Serrated Bread Knife to try out – and I love this knife. It’s the cleanest cutting bread knife I’ve ever owned, and there is one on the way to one of you lucky readers too, just check out the details below! 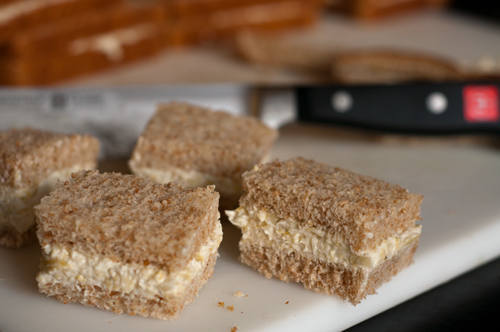 I made two varieties of tea sandwiches: one with a lemon dill cream cheese spread (recipe coming soon) and cucumbers, and one with this cheesy artichoke spread. If you have any filling left over you can heat it up and eat like an artichoke dip with veggies and crackers.

WÃ¼sthof provided me a bread knife to test and is providing the knife as a giveaway for one of my readers, but my opinions about the knife are my own, and I love it! You can find them on Facebook and Twitter at:
Facebook
Twitter: @wusthof