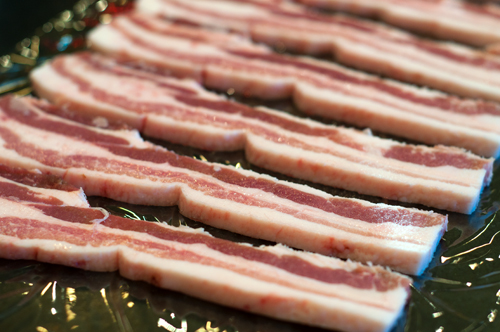 I’ve written here many times about buying meat from local farmers and ranchers. Nothing excites me so much in the food world as the day I get the call that my half hog is ready at the processor. I drive the hour or so north east of Denver to pick it up and can’t wait to get home and make pancetta from the pork belly that I always ask them to leave unsmoked and uncured. Unfotunately, this year I arrived to find that they had gone ahead and sliced the pork belly into thick slices and wrapped them as rashers of uncured bacon. Well that stumped me…but only for a minute! 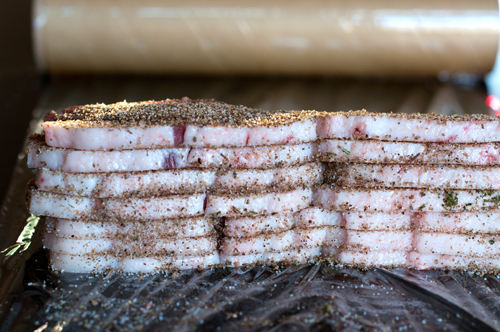 I don’t have the means to smoke the bacon (although I would love to try applewood smoking it someday), but I do have a great curing spice mix that I used for my pancetta last year. So I experimented with a single package of the pork belly slices, which is about a pound, rubbed my curing spice blend all over each slice, then stacked them one on top of each other. 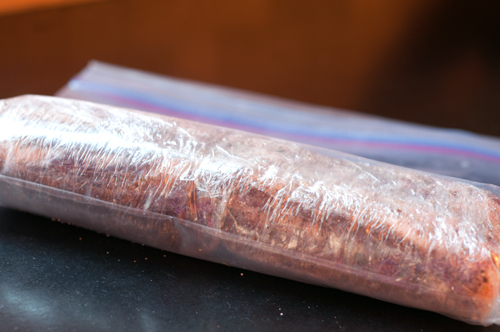 I wrapped the slices tightly in plastic wrap then put the whole thing in a Ziploc bag to cure in the refrigerator.I figured I would just try a 10-14 day cure like I used for pancetta, and it turns out that was perfect. 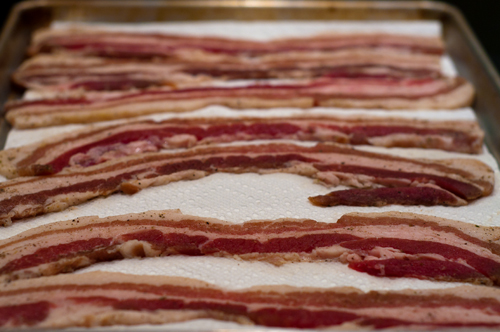 After the curing, because every single slice is slathered with curing spices which include a ton of salt (both pink and kosher), it’s really critical to rinse them very well and get as much of that off as you can. Normally when making pancetta after rinsing off the curing spice I would hang it to dry inside my spare refrigerator for another 10-14 days, but since the slices are so thin I feared this would overly dry it and leave me with jerky instead of bacon. So instead I laid the rinsed slices on layers of paper towels on a baking sheet, blotted the top with more towels to remove as much moisture as possible, then let it air dry in the refrigerator just overnight. I cooked up one piece to make sure it worked, and it was perfect – so perfect that I gobbled it down with my eggs and forgot to snap a photo of it. So if you find yourself with any fabulous thick sliced pork belly, by all means give this a try.