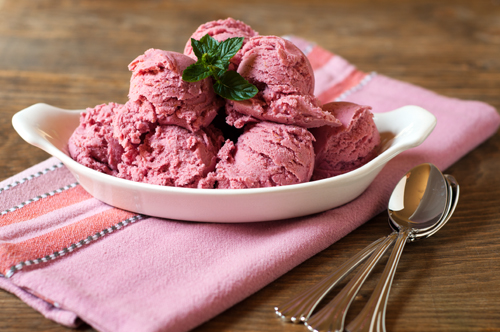 A couple of weeks ago my daughter and I were asked to judge the canning contest at our CSA farm’s harvest festival, and when we got home we made this raspberry ice cream using fresh raspberries from the farm. The festival itself is always a great event, filled with families, food, and the annual opportunity to raid the fields in a U-Pick frenzy. For those of you wondering if a CSA is financially a good deal or not, here’s the secret: taking advantage of the U-Pick opportunities at my farm this year netted me 100 pounds of organic heirloom tomatoes (a $400-$500 value according to Whole Foods’ pricing), 25 pounds of Anaheim and Poblano chiles (I could of picked more but was just lazy), 3 nice pumpkins, and two gorgeous pints of raspberries that were so ripe they were starting to macerate on the way home. I could also have picked onions and eggplant, but didn’t feel we needed more and didn’t want to be greedy. And thanks to my travels early in the summer, I actually missed the strawberry and asparagus picking. Those veggies were all put up – canned, roasted, frozen and such – and the value of that produce more than covered the cost of the CSA for the whole summer. It is TOTALLY worth it! 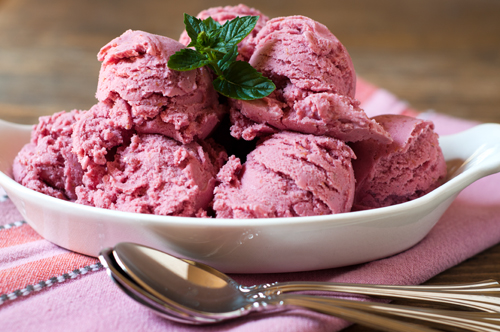 But back to those raspberries. I knew I had to do something with them immediately, as they wouldn’t even last overnight. I could have made a simple raspberry sauce, strained it, and frozen it to figure out how to use later. But I opted to make ice cream. This might be the strangest ice cream recipe I’ve come up with. I wanted to make it a bit more like sherbet, heavier on the fruit than cream. But it turned out I only had about 1/2 cup of heavy cream and no milk. So I made a custard using dry milk, water, sugar, and egg yolks. The fat in the yolks makes up for the missing fat in the skim milk – without the eggs, this would have been very icy indeed, and not at all creamy. I also didn’t strain the seeds from the raspberries because it was too much work (I had to roast that 25 pounds of chiles the same day at 5pm!), but you can if the seeds bother you. The result was a creamy, but sherbet-like ice cream that happens to go really well with a nice reduced balsamic glaze. Don’t have fresh raspberries? You can certainly make this using frozen. Give it a try and let me know what you think.