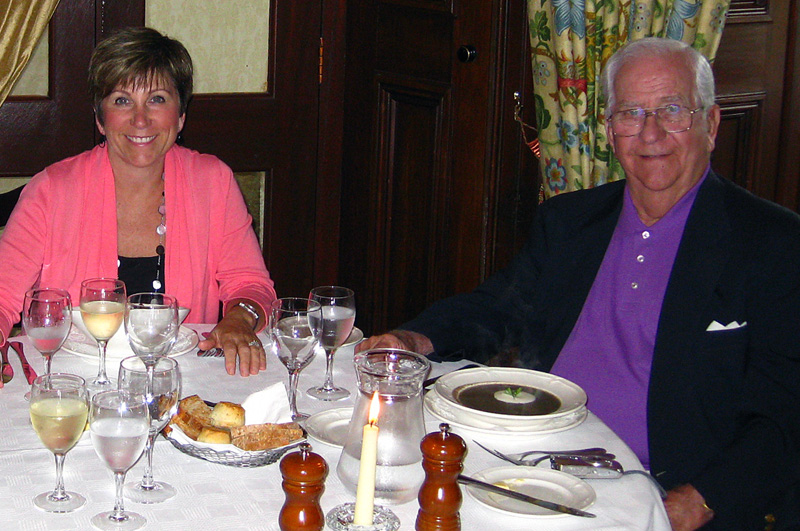 Dinner with my dad at Ballinalacken Castle in Ireland
It’s been four years since I lost my dad and as anyone who has lost a parent knows, you never stop missing them. Over time, your memories bring you comfort, I’ve learned, but I still miss my dad tremendously. After he died, I began that awful yet unavoidable process of cleaning out his desk and files. Drawers were filled with old bank statements, far too many office supplies for a retired person, and one folder that immediately caught my eye: Recipies. Yes, that’s how it was spelled, which shows you how little my dad really knew about cooking, or how much cooking he ever did. I tucked that folder away for later, then forgot about it in the whirlwind of things to take care of after his death. Last week while cleaning out my office, coinciding nearly to the day of the four year mark since I lost my dad, I found it, and relished going through the file.

As a kid, I would make a peanut butter sandwich with strawberry jelly almost daily, and my dad would inevitably ask me to give it to him and make myself another one. My mom was the cook, not him, and it wasn’t until her dementia set in that I ever really saw him cook anything. Even then, when he did take over some of the cooking, he made things like bacon and eggs with toast for breakfast in their retirement apartment, or soups, which both of them loved for dinner as they aged.

But here in his file drawer was a glimpse into his cravings, a side to him I didn’t really know while he was alive. I wouldn’t be able to discuss whether he made these dishes or not, but just leafing through the torn out magazine pages, I felt I was connected to him still.

Right on top was an elaborate piece on Chicken Pot Pie, in a 2011 issue of Fine Cooking, to celebrate the 60th anniversary of Swanson’s creation of that classic comfort food. I saw immediately why this appealed to him: the article showcased 5 different variations of the classic, but all were topped with an all-butter, fabulously flaky crust. My dad was a sucker for comfort foods, especially if they included a buttery crust.

The next page was a Rick Bayless recipe for Spinach Salad with Bacon and Roasted Mushrooms, featured in Country Living. My first thought was why were my parents reading Country Living since they never lived in the country? Even more perplexing, though, was why my dad would ever have a recipe for anything with spinach in it. As a kid, he was brought up in a Catholic school where the nuns actually forced food down kids’ throats if they didn’t eat it. He had had a run in with one of the nuns over spinach, and although my mom and I adored it, never in my life had I seen him eat it. Did he think the bacon and mushrooms would cover the taste? Was my mom pushing him to try it again? Did he maybe just hate it cooked and could handle it in a salad?

The Gazpacho recipe from Real Simple that I found, on the other hand, was no surprise. In the summer of 1970, my family made a 5-week long road trip across the country, using our trailerable 22-foot sailboat as a camper. On that trip, we met my godparents (Uncle Ted was at the time the city manager for Boulder) to have a picnic at the top of Pike’s Peak near Colorado Springs. My mom brought gazpacho, and my Aunt Rosemary brought something I had never had, something that seemed both exotic and fun to an 11-year-old: string cheese. For many years my mom would regularly make a quick version of gazpacho by just pureeing the leftover salad from the night before with some tomato juice, and my dad loved it.

There were many pages of recipes in that file that I couldn’t make sense of: was he planning to make his own crackers, a different type of chicken pot pie, or the Panang vegetable curry, which were all on the same page of one article? Others were obvious because he had starred the recipe with a Sharpie: Irresistible Tiramisu or Frozen Blueberry Cheesecake. Now these, indeed, sounded like the kind of decadent desserts my dad would have salivated over.

My dad loved many things in life: sailing, golf, telling a joke, his family, and gin are all right up there. But maybe nothing as much as great food – he lived to eat. From his chubby teenage years, to his college years (his nickname was “Tubby”), and through his adult life, my dad was always overweight. He just couldn’t say no to delicious things.

My mom, who worked for many years for a diet company similar to Weight Watchers, was constantly trying to get him on a diet or monitor what he was eating. If she was cooking the dinner, that worked pretty well, but when they retired and ate out more, she lost that control. Whether it was her nagging, or his own worry about his health, he had a 2012 article in that file titled Healthy Comfort Food from Good Housekeeping that featured reduced calorie versions of old favorites. Sadly, you can’t start eating healthy at 78 years old and expect it to erase the sins of a lifetime, and he died suddenly of a heart attach just a few months later.

The last page of the file was a printed email that I had sent him. He had wanted to make a seafood pasta recipe like he had recently eaten in a restaurant, and asked me to figure it out for him. I scoured the Internet and came up a version I thought sounded similar to what he had described, and sent to him along my recipe for the carrot soup I had taken over to my parents just the week before. I was touched to find that he had filed it along with these other special recipes.

We had come a long way from sharing that peanut butter and jelly sandwich in my childhood. I was not an easy child to raise – having a fiercely independent spirit, and always willing to test the limits, I was in trouble quite a bit. My dad and I battled during my teenage years, but got through that period with our relationship intact, and remained very close. We were alike in many ways – both Libras, both extroverted, both worked in the tech industry – but perhaps most alike in our love of eating really delicious food. I was so proud the day the boxes arrived stacked with copies of my first cookbook, yet the first thing I did was burst into tears – actually more like heaving sobs of grief – because my dad wasn’t there to share my success with me.

As happens in families, the role of caregiving shifts from the parent to the child as the parent ages and the child matures. I was happy my parents chose to spend their final years close by in Colorado, and I was honored to be able to help my dad as he aged. I did big things like help him through his treatments for prostate cancer and managing the bills once my mom’s dementia set in. And I did little things like buy him blueberries from Costco to store in the freezer because he so adored blueberries and ate them every day.

Although I’ve tossed all of my own old recipe clippings, knowing I can find just about anything online these days, I’m hanging on to that file of his. And one day soon I’m going to make that Frozen Blueberry Cheesecake, and enjoy it with my wonderful memories of my dad to keep me company.