Nothing says cooking in season in cold regions like slow cooking something in the oven. I dread turning on the oven in the summer for fear of overheating an already hot house, but in the winter, I crave the extra warmth, and the scented kitchen all afternoon is just a bonus. 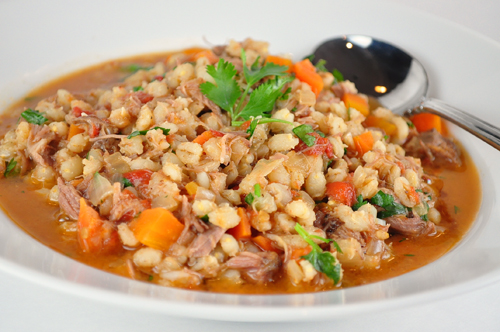 The other bonus is that a slow cooking method can make super stars out of lesser (translation: cheap) cuts of meat like a shoulder roast. Since I bought a whole lamb and a half hog this year, I have these cuts to use up, and came up with this very satisfying lamb and barley stew last week. 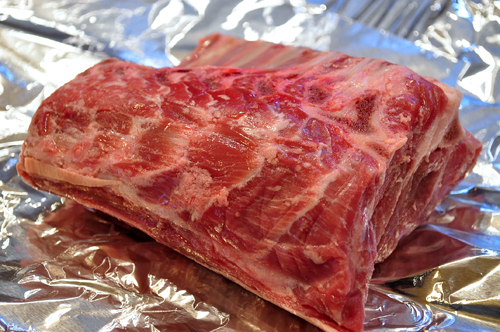 I developed this technique for cooking shoulder roasts after making the chili from the cookoff I judged this summer (those of you wanting the second and third place winner recipes, I’m working on it.) Lay the shoulder roast on top of several layers of foil – enough to be able to wrap it tightly and not let any steam or juices escape. 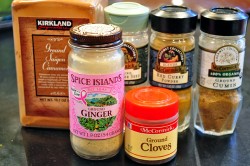 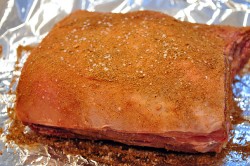 Then season it. I was going for a Middle Eastern flavor profile, so I created a dry spice rub and slathered it all over the roast before sealing it up tightly in the foil and placing it in my Dutch oven that I had filled with about an inch of water. 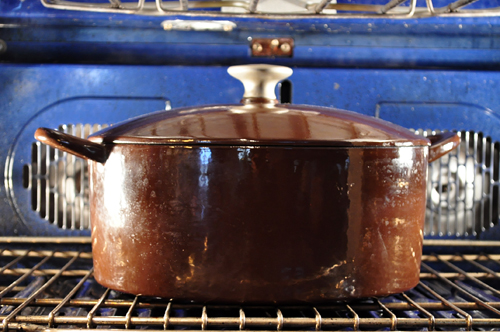 If you don’t have a Dutch oven yet, visit my new Kitchen Shop and you’ll find the one I have plus this smaller version and this petite version. They are all from Mario Batali’s line of cookware, and no offense to the more expensive brands, but these are great productrs for significantly less money. And that’s a good thing… 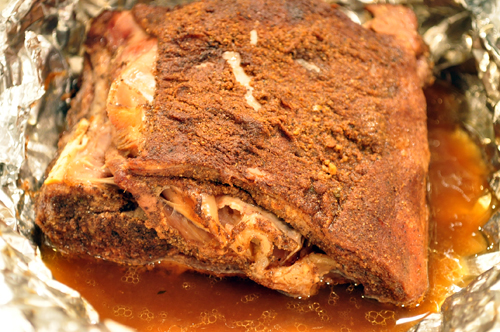 After slow roasting in the covered Dutch oven (low temp like 300, long time like 3-4 hours), carefully open the foil and you’ll find this tender meat sitting in it’s own juices. Carefully lift the meat out on to a cutting board while making sure you don’t spill the juices. Then pour the drippings into one of those measuring cups that separate the fat from the flavor. Drain off the fat and retain the other drippings to add to the stew. 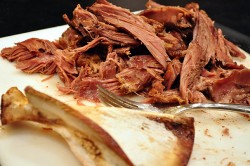 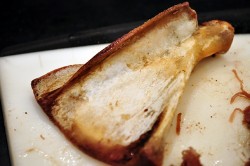 Separate the fat and bones from the meat, which I did with my hands and a fork because it was so tender. Notice how clean the bone is? That’s because the meat literally just fell off it. Return the shredded meat to a pot on the stove along with the remaining stew ingredients to simmer together. 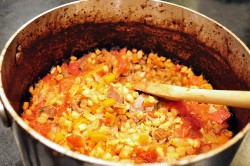 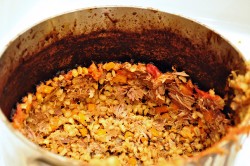 And here’s where blogging gets in the way of cooking. I was busily working on my site, posting a new recipe, reading other food blogs when I began to smell something burning. I had turned the stew on high, meaning to reduce it to simmer, which I obviously forgot until all the moisture boiled away and it burned badly. Fortunately I was able to save the center portion of the stew (although I nearly cried at how much of that lovely lamb was charred onto the side of the pan). And fortunately my husband is compulsive about doing dishes. After two days of working on the pot he saved it. 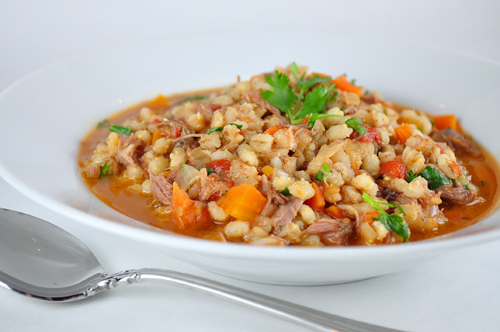 Despite the near fatal flaw in my technique, I was rewarded with a succulent, savory lamb stew that we had for dinner and I’ve been enjoying for lunch the past few days. I have a pork shoulder I’m thawing as I write – I wonder what I can make with it that’s creative?