I’m on a pork kick. Not sure whether it’s because the half hog I got from my farm this year tastes so superior to any store bought meat I’ve ever purchased, or whether the incredible porchetta I had in San Francisco a couple months ago just launched me on this culinary trajectory. Who knows, but I’m hooked on all things pork. Pork shoulder slow cooked then turned into an incredible Green Chili Posole, thick slabs of bacon cooked on baking sheets in the oven and used to top Corn Chowder, or as I promised yesterday, the perfectly pan-seared pork-chop. 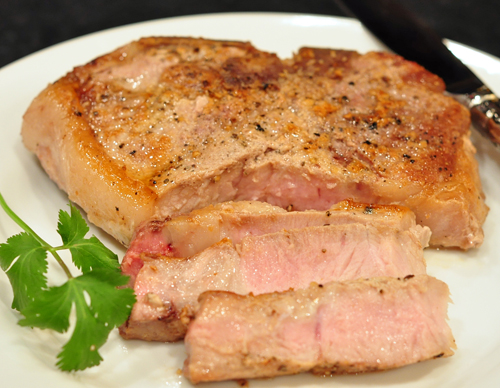 Let’s get a couple of things straight. Perfectly cooked pork is still slightly pink in the center, cooked to a nice medium, not cooked to shoe leather well done as you might remember it being cooked in the ’60s. If you’re still concerned about diseases, buy your meat from a reputable local source and then enjoy cooking it to the right temperature. My husband thought he hated pork – turns out he just hates overcooked, dry pork. And really, who wouldn’t? 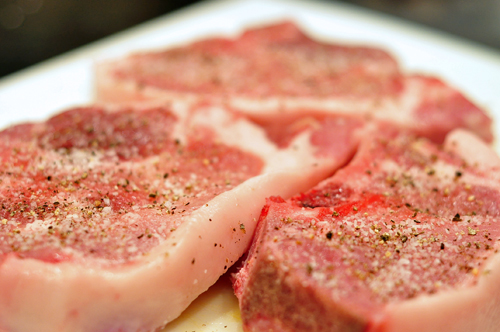 Start by patting your chops dry and sprinkling them very liberally with salt and pepper. When the only seasoning to be added isÂ salt and pepper, you want to be sure there is enough of it. 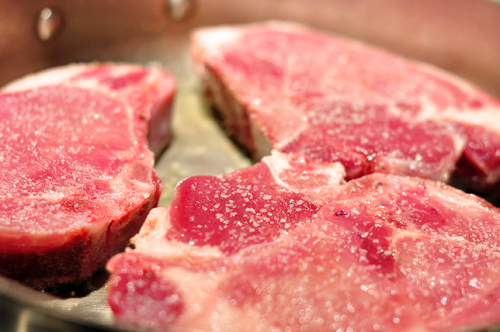 Heat your skillet to medium high and add the olive oil. When it’s shimmering hot and not a moment before, add your chops. [Did I forget to put pepper on the second side of these chops or did I just snap the shot before I did?] Sear on one side, without movingÂ them at all, untilÂ they areÂ nice and golden brown on the first side, about 3-5 minutes. My chops come bone-in from the farm, and cooking anything bone-in creates the most flavor. I leave the bone and all of the fat while I cook them, then cut the meat from the bone and trim the fat before serving it. 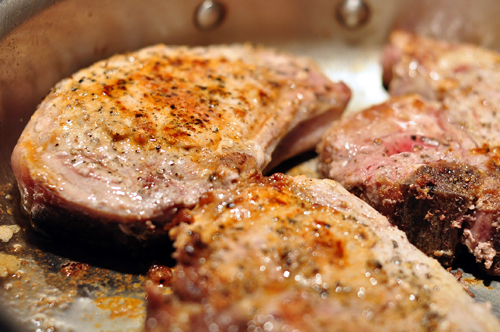 Flip and sear the other side until browned. At this point my mom used to cover the pan and let the chops cook all the way through, but I remove them from the heat and let them rest for a few minutes before cutting into them. Not sure how to tell how done a chop or steak is? The pros do it by feel and a steak or chop cooked medium should have a slight resistance when you press on it with your finger but not feel hard and solid. I know that’s hard to envision – it just takes practice. 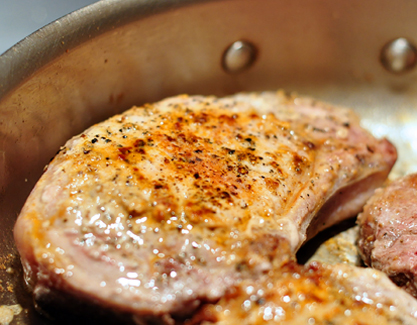 And that, my dear friends, is how you perfectly pan sear a pork chop! Serve it with Homemade Applesaucefor a real treat. You made the applesauce didn’t you?! Promise me you gave it a try!