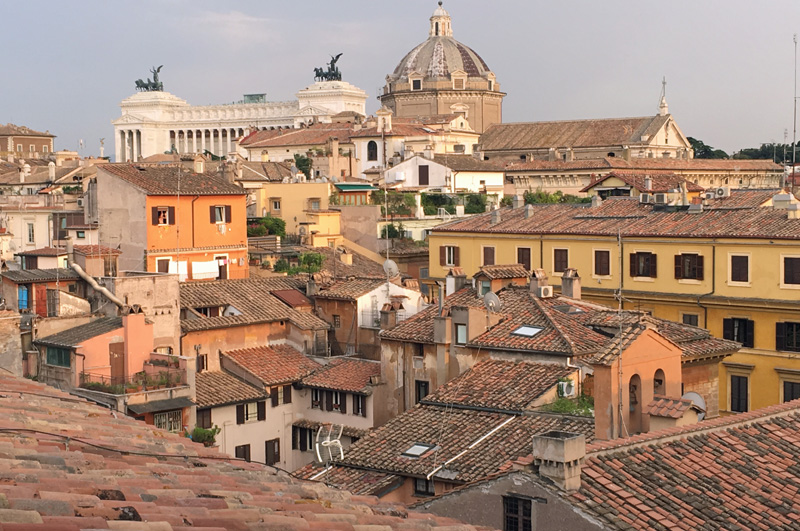 I visit Rome at least once a year – it’s “my place” – and when I’m there I try to balance returning to some of my favorite places to eat with trying out new suggestions from friends. Consider this post my “little black book” of eating and drinking in Rome for 2016, and tuck it away for reference should you be planning a visit soon. 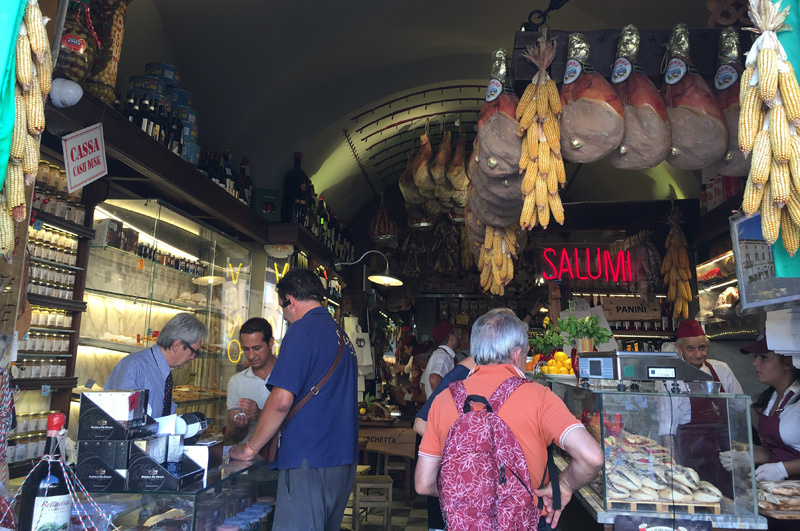 L’Antica Salumeria is right on the Piazza della Rotunda adjacent to the Pantheon, and I had read about their porchetta sandwich – it’s simply sliced porchetta inserted into a split open piece of pizza bianca, and they will heat it up on the panini press for you. The salty, flavorful pork shines in this dish – but have a bottle of water ready as the “sandwich” contains no sauce so is a bit dry eaten alone. 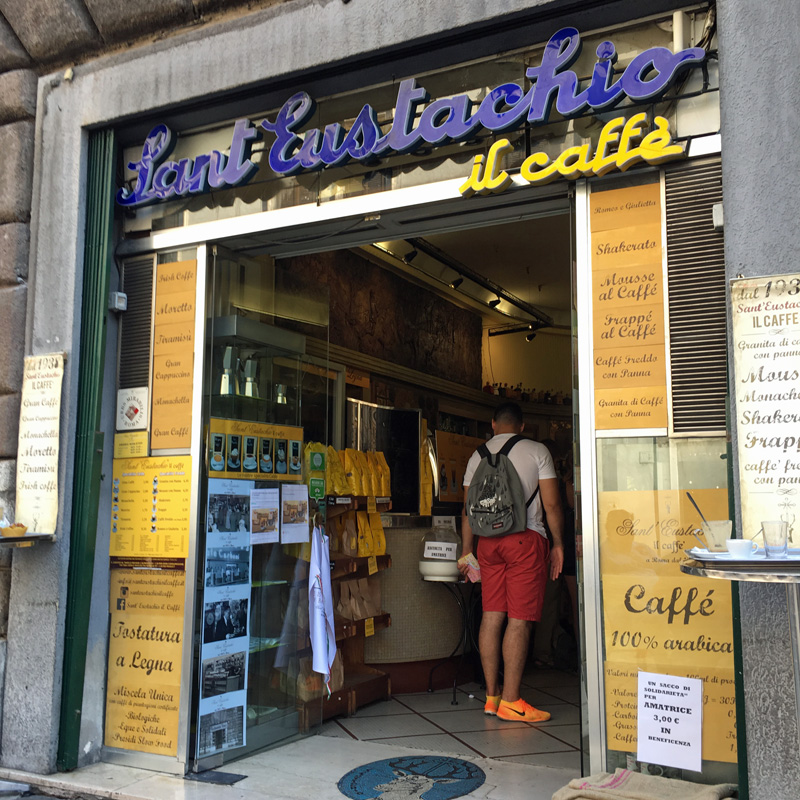 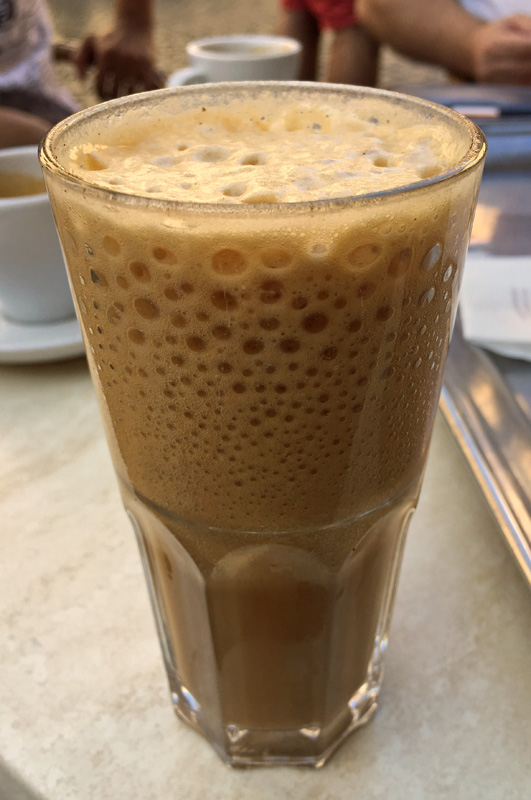 When it’s 90+ degrees in Rome, I think there is nothing more refreshing for an afternoon pick-me-up than a shakerato from Caffe’ Sant’Eustacchio. They combine espresso and ice in a metal shaker and put it on a machine for a few minutes to whip it into a frenzy – they’ll add a drop of milk to the mix if you like, and be sure to remember to let them know in advance if you don’t want any sugar added. It’s hard to get a seat at the outdoor tables of this famous coffee bar, so offer to share a table with others as I did. I met a lovely family from Argentina and had a nice little chat while cooling off and resting my feet. (Note: if you are fine enjoying your coffee at the counter like most Italians do, you’ll be in and out quickly and the drink will be half the price of table service.) 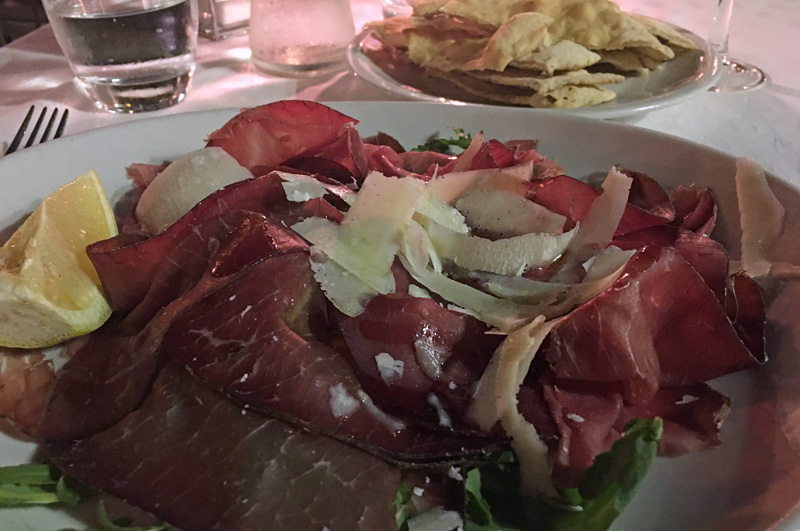 Scusate Il Ritardo sits on the Piazza della Rotunda facing the Pantheon, and I visit here often partially because it’s just steps away from my hotel, but also because I love something to watch when dining solo. The Pantheon lit up at night never disappoints and the people watching is fun too. Bresaola is cured beef (sort of the beef version of prosciutto) and is usually served over arugula with some Parmigiano cheese and lemon. They served it here with some thin and crispy pizza bianca (Roman style very thin pizza with no sauce served almost like a cracker) to enjoy with it, and boy did I! 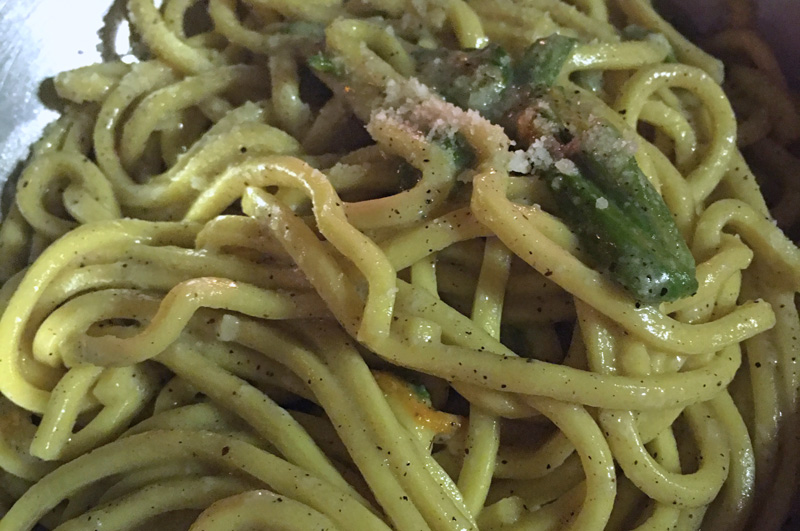 I don’t like to take a prime table in Italy and only order a single course, so I decided on their late summer version of cacio e pepe (spaghetti or bucatini with Pecorino cheese and pepper) that included zucchini flowers for a second course. The pizzas at this spot are also good if you find yourself in this area. 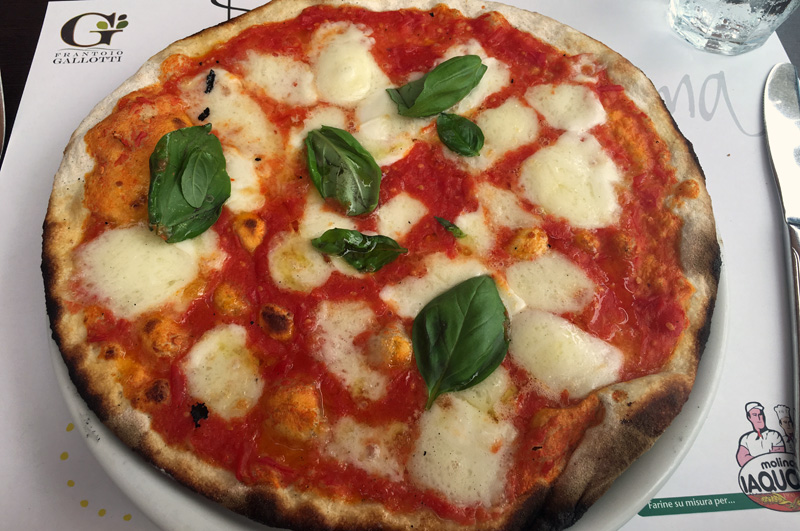 I spent a day wandering through the Monti, Esquilino, and Testaccio neighborhoods one day, and after hitting 20,000+ steps on my Fitbit, landed at Emma between the Campo dei Fiori and Largo Argentino, upon Elizabeth Minchilli’s and Lucky Peach’s recommendations, because it’s one of the few places in Rome that actually fires up the pizza oven for lunch. The pizza del giorno was similar to a basic margherita pizza, but featured a special cheese on top and a sauce made from some high quality tomatoes – what could be wrong with that combo, right? True Roman-style pizza has a very, very thin and crispy crust, making it really possible for one person to eat a whole pizza. I didn’t get that when I first began to visit Rome and order pizza. I would ask how large the pizzas were and always be told “sono normale”, they are normal. Now I know that means they are about a 12-inch pie that’s easily consumed by one person – and remember, Italians eat pizza with a knife and fork. 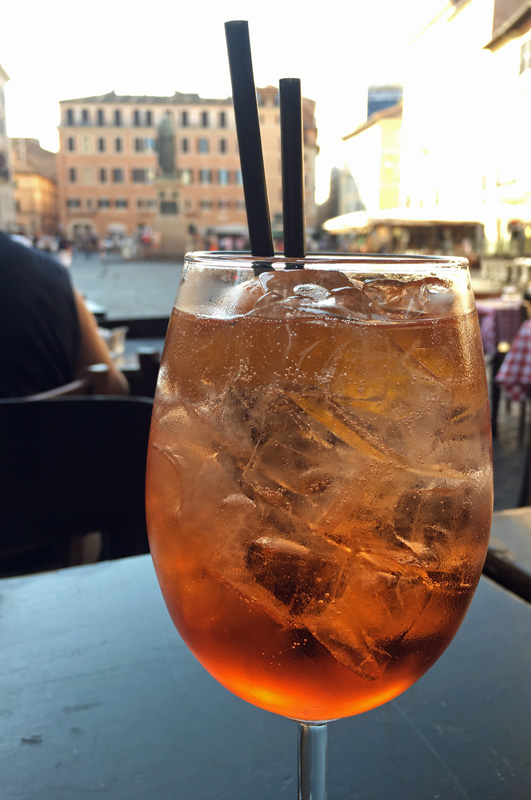 In the late afternoon in Rome, when I’m wandering on my own and in need of a chance to sit down for a few minutes, I’m always torn between caffe’ and an aperitivo. The issue is jet lag – drinking coffee too late in the day in an effort to keep going could end up keeping me up too late, whereas having a drink when I’m tired could put me to sleep too early. On this day, after hoofing it all across town in the heat, even shopping for a breezy linen dress (take note, if you are in Italy in August all the summer fashions are on sale!), I opted for a drink, a classic Italian Aperol Spritz, which is Aperol with Prosecco and soda water over ice with a slice of orange. It was perfect to sip on while watching the vendors clean up at Campo dei Fiori late in the day. (Note: I’ve stopped coming here during the day for the market as it’s really sort of trashy now, and opt instead for the market in Testaccio.) 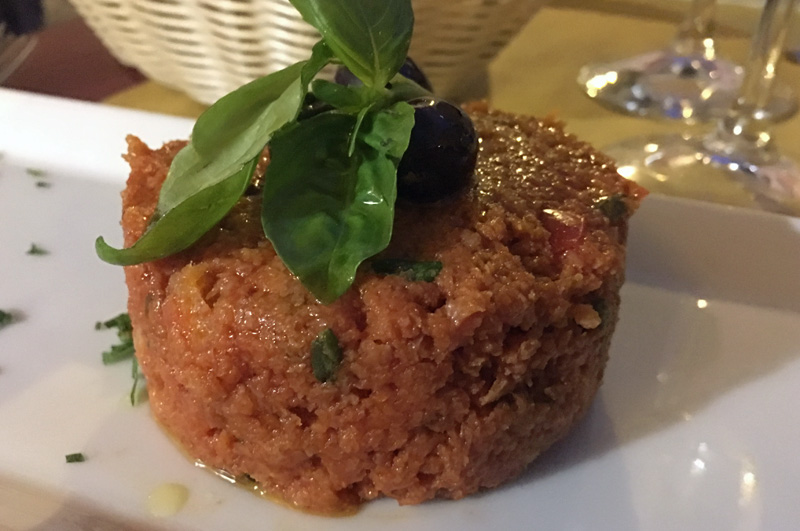 It’s fun to now actually have friends in Rome, and I enjoyed meeting one of them for dinner at Hosteria Grappolo d’Oro just one street behind the Campo dei Fiori for dinner. I hadn’t been there before, but my friend’s friend works there and she booked us an outdoor table. The panzanella in Italy is different than I’ve had in the US, but delicious. The bread is soaked until it breaks apart and mixed with tomatoes and basil and high quality Italian extra virgin olive oil – yummy! 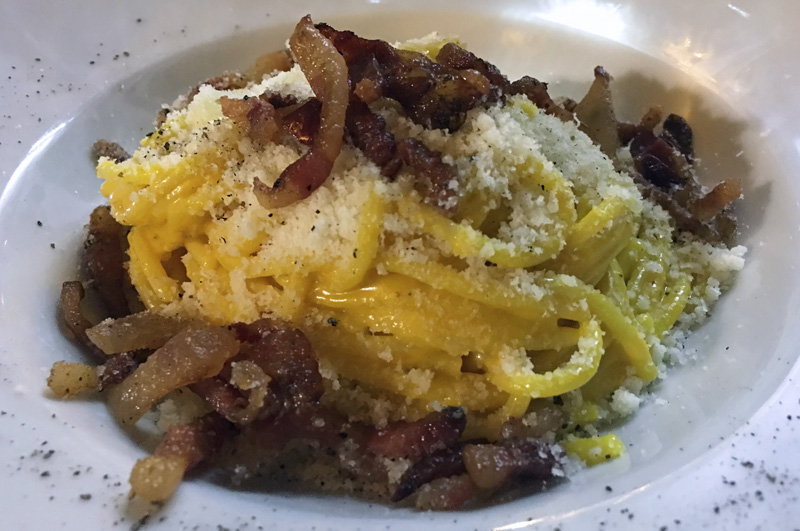 On my friend’s recommendation that it was prepared really well here, I had the carbonara, one of my very favorite Roman pasta dishes, and it was decadently loaded with egg-y goodness and guanciale (Italian bacon similar to pancetta). I insisted I couldn’t finish the serving, but did anyway against my better judgment because carbonara is so rich. I paid for that indulgence with a slightly troubled time getting to sleep that night. 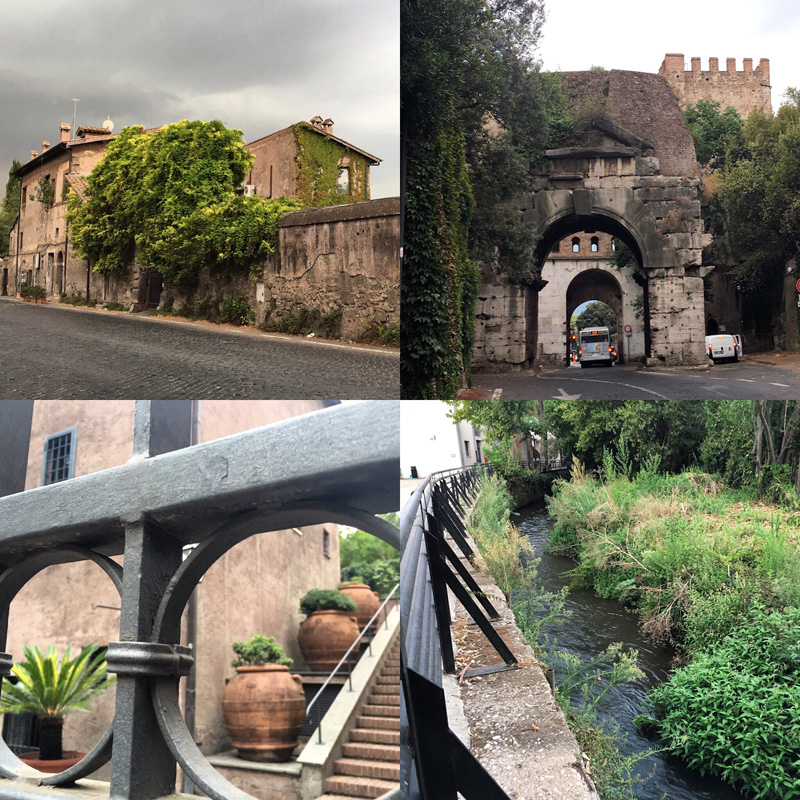 I try to walk a lot when I’m in Italy – and by a lot I mean usually over 20,000 steps a day – as it helps offset the pizza, pasta and wine I’m enjoying. So on one of my days alone I decided to hike all the way out to the Parco Regionale dell’Appia Antica, thinking I would get some exercise while seeing a piece of history. 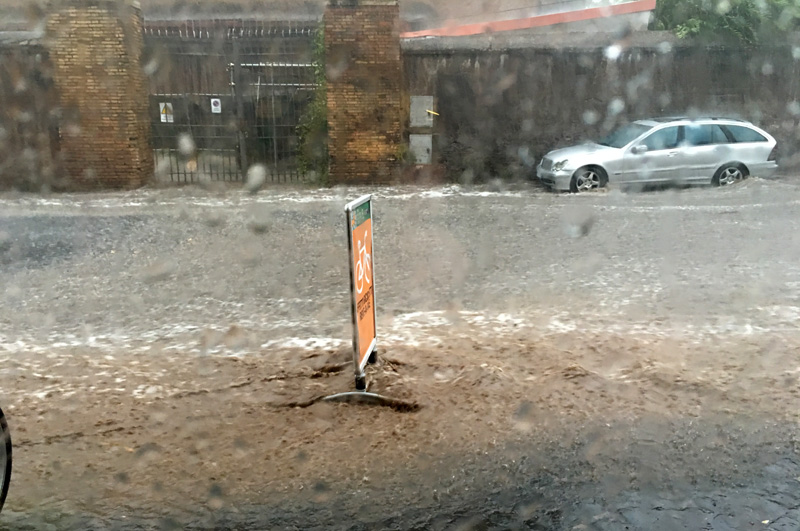 But as they say, the best laid plans! The skies opened up with the most torrential thunderstorm, including hail, and flooded the Appian Way. I was fortunate to be right next to a bike shop near the park when it started, and I took cover for nearly an hour waiting for the storm to pass. When it finally did, I was unable to find a taxi anywhere and was forced to walk through ankle deep flooding to make my way to Eataly in the Ostiense neighborhood for lunch. I find a food goal helps me keep going when I’m in a pinch! 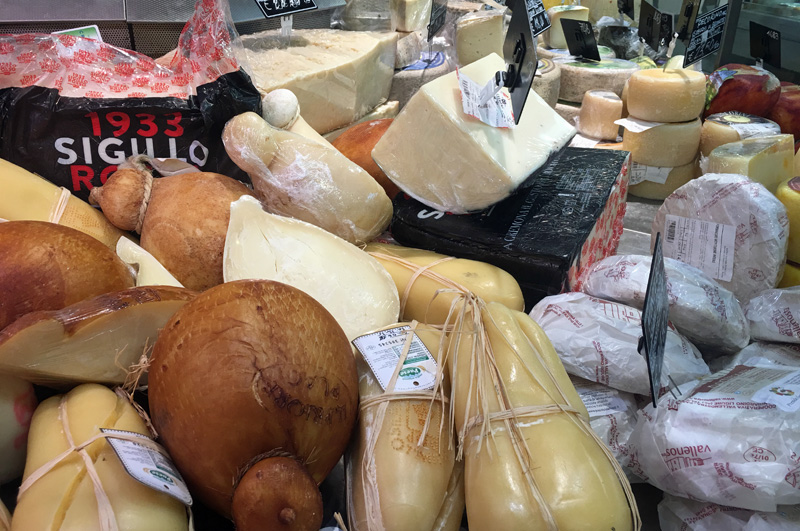 Eataly Roma is not at all like the tourist attraction the Eataly stores are in the US – Romans actually shop here or come for lunch if they work in the area. And the options for food are endless. You’ll find everything from meats and cheeses to fish to pasta and pizza or fried treats. 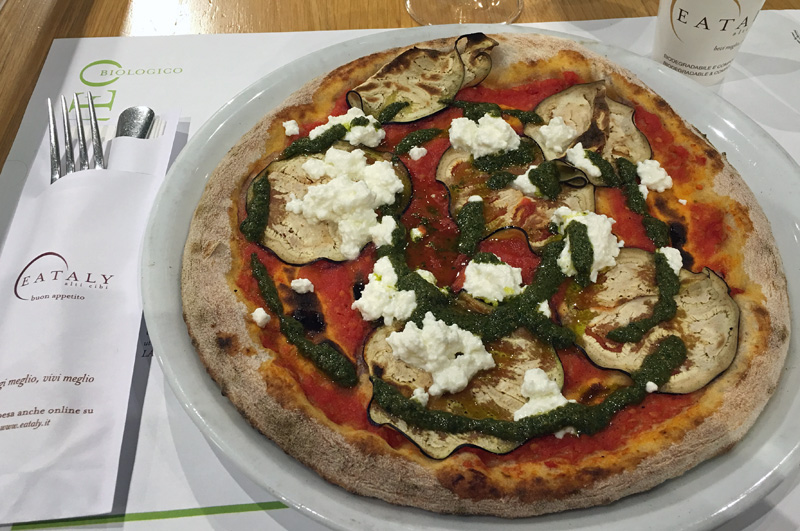 After circling the store on multiple levels for a bit, I settled on the pizza place and ordered this one with tomato sauce, very thinly sliced eggplant, ricotta, and pesto. I ate every bite while watching an Italian extended family dine. Their older kids chased their younger kids endlessly around the restaurant, the server clearly annoyed at the chaos, but the parents remained completely unfazed and uninvolved. 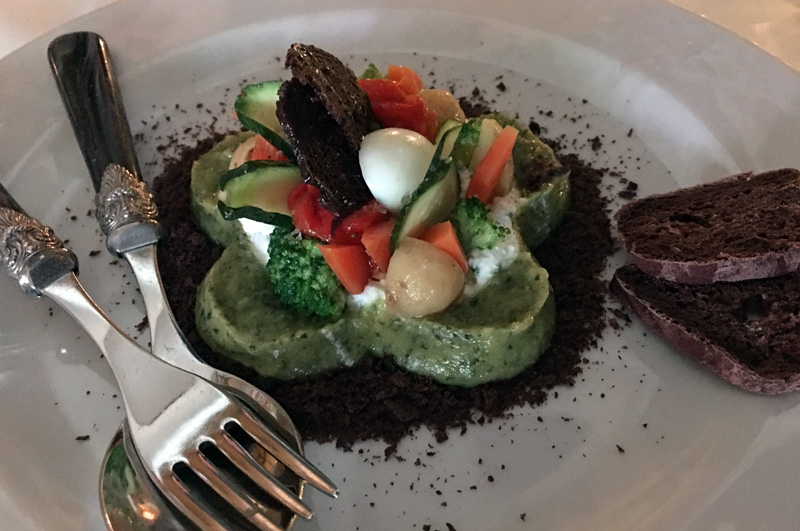 That evening two of my four guests for our food and wine adventure arrived in Rome and we headed to Babette on Via Margutta for dinner. I knew they wouldn’t have time to see this part of Rome since our stay would be short, and this gave me a chance to give them a glimpse of the Spanish Steps (currently closed for a 1.5 million euro restoration funded by Bulgari that has been delayed as often happens in Italy) and a peek inside the lovely Hotel de Russie. Our first course was this gorgeous vegetable terrine appetizer served with delicious brown bread. I like Babette for just this reason – the dishes are more innovative and less heavy than traditional Roman fare. 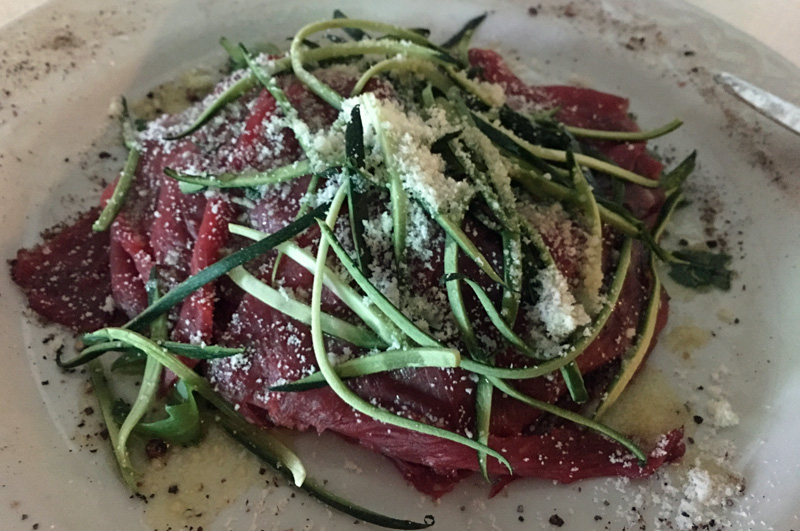 I also like the carpaccio di manzo here. Carpaccio in Rome is served with thicker slices of beef than I’ve ever seen in the US, and therefore it’s usually listed with other meat secondo dishes instead of with the antipasti. It’s served over arugula at Babette, with shaved zucchini over the top, and it’s delicious but not too heavy. 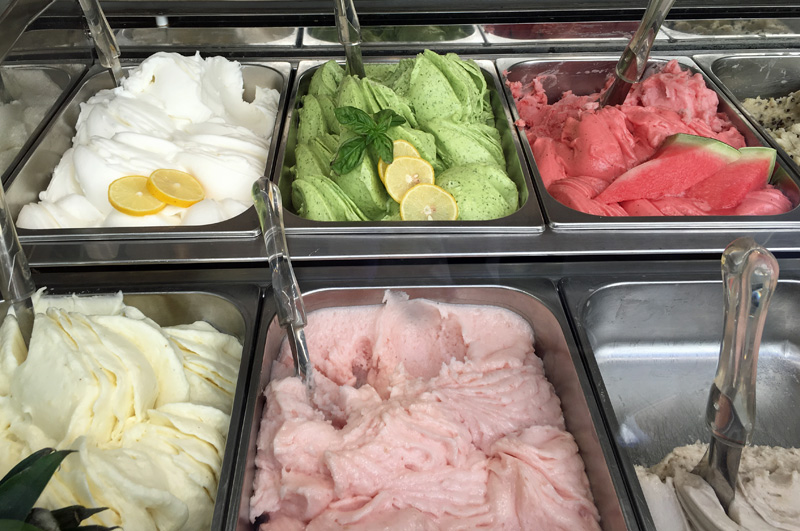 As good as the gelato in Italy is, I don’t have it very often while I’m there, choosing to indulge on savory dishes instead. But when I was walking across the river with my group on a tour in the 90+ degree heat, I couldn’t pass up the opportunity try the basil and lemon gelato you see here. It was unbelievably good – stay tuned for the recipe to be posted on Thursday, as this was the very first dish I had to recreate at home after my trip!

On my last evening in Rome, I almost always visit the roof top bar at the Hotel Minerva for a cocktail before heading out for dinner. Drinks (and food) are expensive here, but come with incredible views – in this direction over the rooftops to the Monument to Vittorio Emanuele, and in the other direction, a rare over the top of the dome view of the Pantheon – and are worth the splurge. The service is relaxed (a bit slow), but use that as an opportunity to slowly sip your drink while watching the setting sun paint the rooftops of Rome with soft amber highlights. 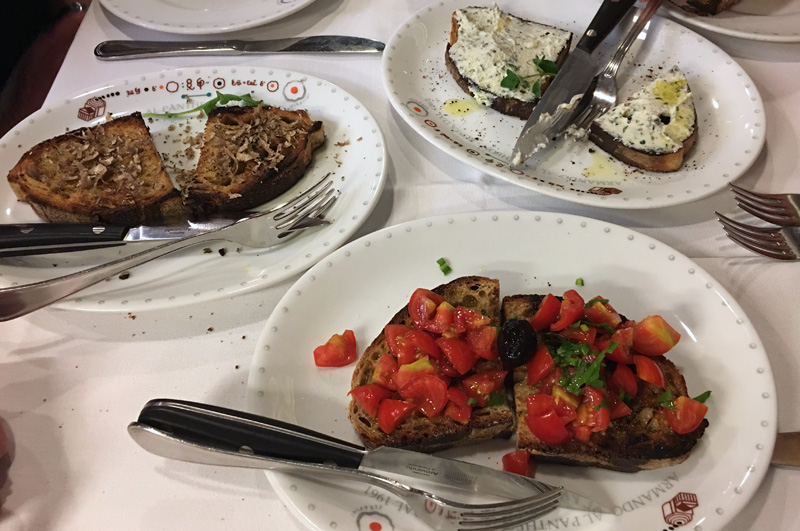 For our final dinner in Rome, I selected the famous Armando al Pantheon, long considered a Roman institution. There is no outside dining (it’s tucked in on the side street right next to the Pantheon) and the interior is tiny, so it’s essential you have reservations. We started dinner with a selection of crostini, including herbed ricotta, shaved white truffle, and tomato and basil. You don’t want to fill up on bread, so order a few to be shared with the table. 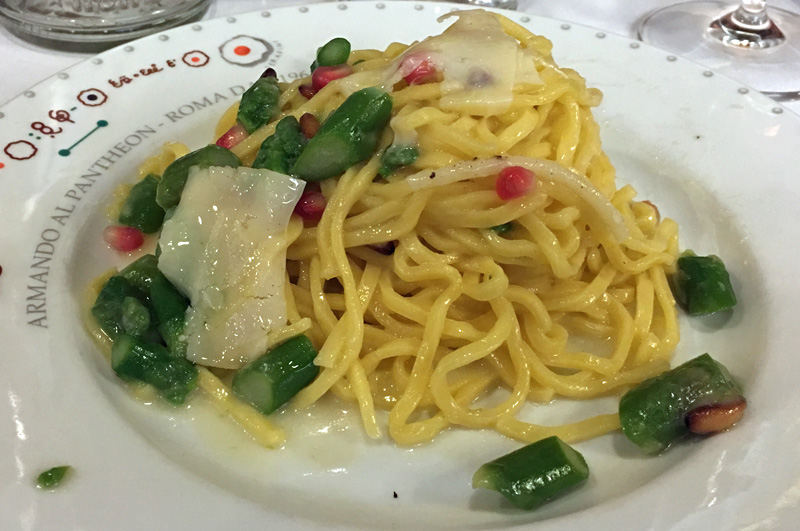 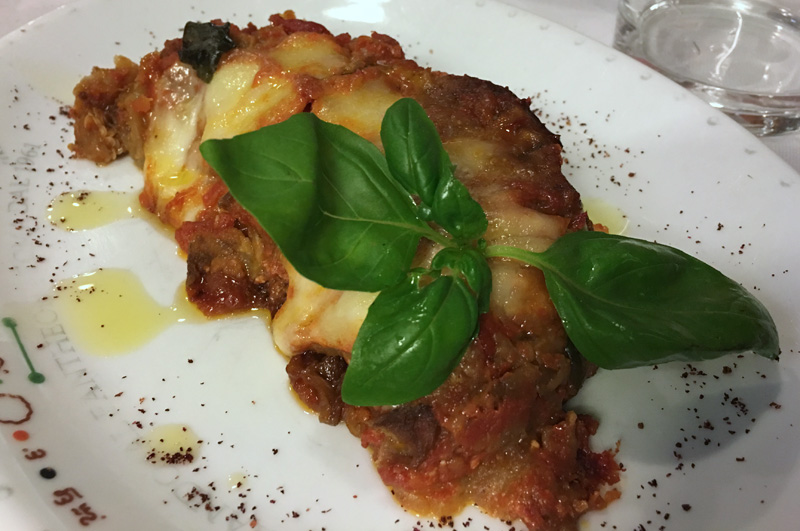 …to a baked vegetarian eggplant dish, similar to eggplant parmigiana… 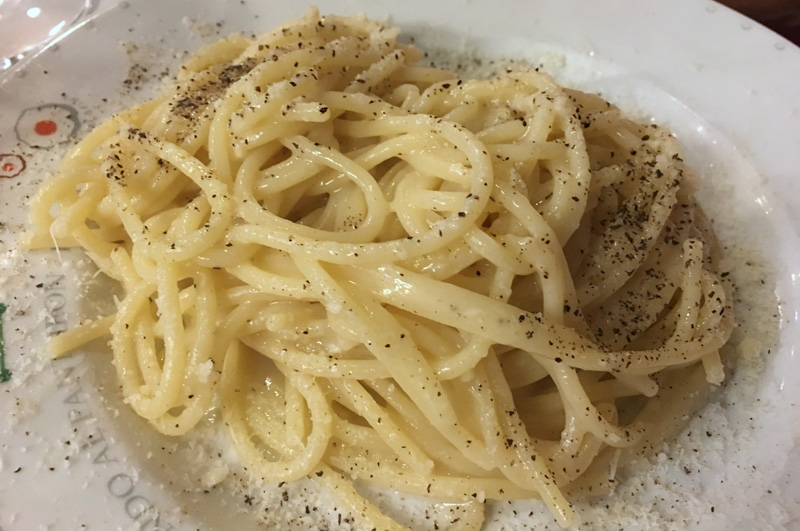 …and the classic cacio e pepe that I will say was the best I’ve ever had in Rome. 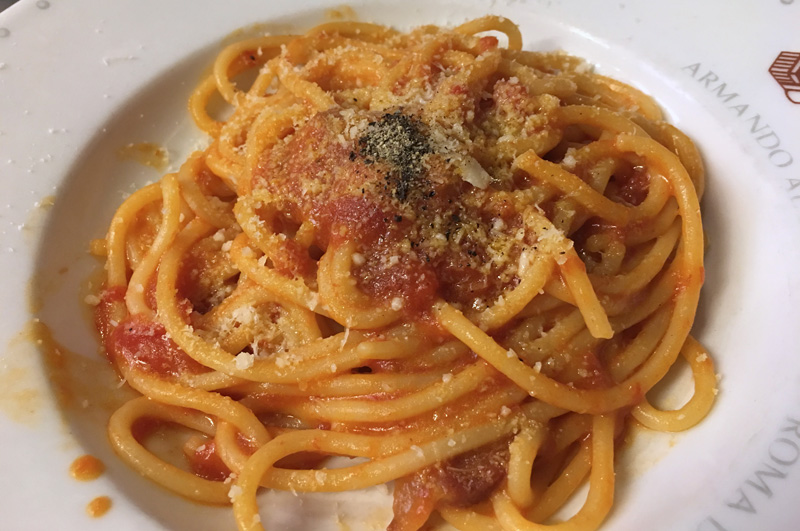 I ordered the spaghetti all’Amatriciana con guanciale, pecorino romano, pomodoro ed un pizzico di pepe. It’s a classic dish of the region, and it hails from Amatrice where the recent devastating earthquake took hundreds of lives and destroyed the small towns. Restaurants all over the world are donating to the victims when you order this dish, so find one near you. 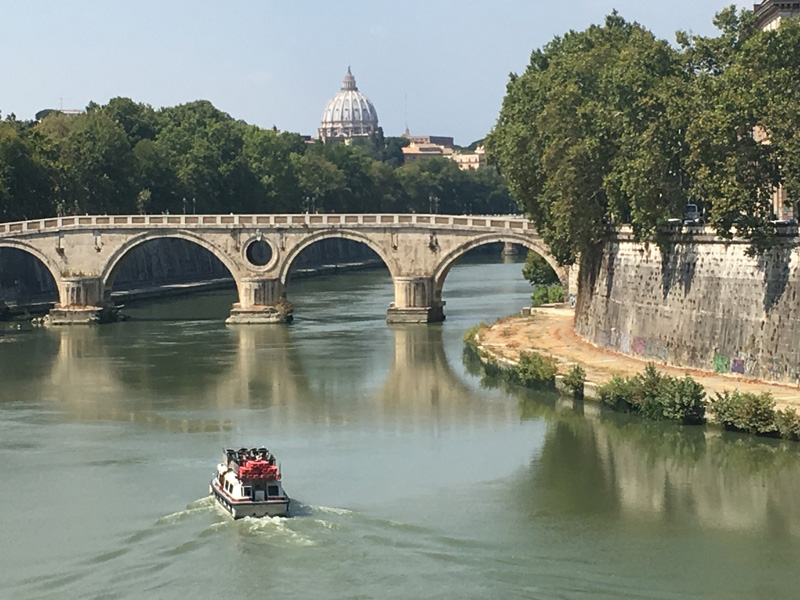 Interested in joining me for a food and wine adventure in Italy? You’ll find information about my trips here and can contact me if you’d like to be added to the list for information about future trips. Buon appetito!